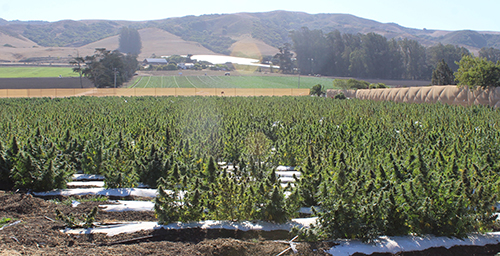 Hemp fields like this one on Los Osos Valley Road contributed to a 29% increase in the value of field crops in 2019, according to the SLO County Agriculture Department’s 2019 Crop report.

Agriculture is still king in San Luis Obispo County, according to the County Department of Agriculture’s 2019 Annual Crop Report.
Agricultural Commissioner/Sealer of Weights and Measures, Martin Settevendemie, and his crew of technicians, inspectors, office help and biologists totaling about 50 staffers oversee the Crop Report and the Ag Department.

It breaks down the different main crops grown in SLO County and their estimated market value, and once again SLO County’s sweetest crop was No. 1. But overall, agriculture production was down nearly $100 million.

“Overall crop values decreased to $979,009,000, representing a 5.5% reduction compared to our previous 2018 values,” Director Settevendemie said in a cover letter addressed to the State Secretary of Food and Agriculture, Karen Ross. “Agricultural values fluctuate from year to year based on growing conditions, market prices and demand for the various commodities grown within the County. However, the diversity of commodities grown within the county help to dampen major swings in overall value. Despite this decrease, 2019 marked the second highest year in terms of overall value for San Luis Obispo County’s agricultural producers.”

Strawberries were the No. 1 crop in SLO County once again with some $271.34 million representing 28% of the value of the county’s total agricultural output.

Wine grapes were second, but down 8%, according to Settevendemie, and totaled $254.27 million. “An oversupply of wine grapes contributed partially to the decline in value leaving some lesser quality fruit left un-harvested,” Settevendemie said.
Cattle and other food animals also fell in 2019 to $41.07M, a 15% drop from 2018. “This can be attributed,” Settevendemie said, “to lingering impacts of drought pushing ranchers to sell less cattle in an effort to rebuild herds. The number of head sold during 2019 was down 18% to 36,765.”

Even vegetables dropped 5% in value and also saw a 7% drop in acreage, which neither strawberries nor wine grapes saw.
Field crops were way up, 29% ending the year at $24.18M, with both prices and yields up, Settevendemie said. The category got a huge boost from Cannabis, as Settevendemie said after passage of the 2018 Farm Bill, industrial hemp was included in the calculations for the first time in 2019.

A lack of farm laborers hurt the harvest especially with the fruits and nuts, which are heavy dependent on manual labor.
“The availability of labor and increased labor costs continued to present major challenges for growers in the area,” Settevendemie said.

The biggest gains were in the “field crops” some 29% over 2018, largely due to good prices on crops like barley and grain hay, which is used for animal feed.
Industrial hemp added largely to the growth spurt as well, and is likely to continue to be a big moneymaker, if the County Supervisors ease up on restrictions and let the industry flourish. Marijuana growing for adult use isn’t legal in SLO County for now.

Values Down but Still Strong

Fruits and nuts, which includes both strawberries and wine grapes, and while strawberries increased and grapes fell despite an increase in acreage, the demand is predicted to remain high and potentially increase.
Settevendemie said, “The overall decrease in wine grape value can be at least partially attributed to an oversupply of wine grapes across the state, as California has reached one of the highest ever levels of planted wine grape acreage.

“This oversupply has led to some growers, such as those operating without contracts or those with blocks of lesser quality fruit, to forego harvest.

“This may correct itself in the coming years as overall global demand for wine remains strong, and many growers across the state are retiring acreage of their low yielding or lower value varieties.”
Broccoli, cauliflower, and head lettuce fell a bit in value (5%) and acreage (7%), but remain strong among the vegetable crops accounting for nearly 50% of the overall vegetable crop values. And, “Celery saw the largest increase in year-over-year value for vegetable crops based on a significant increase in pricing, “ Settevendemie said.

With field crops, under the category of “Miscellaneous” — that includes irrigated pastures, oats, safflower, Sudan hay, wheat, seed, grain stubble and hemp — saw the biggest leap in value going from $3.41M in 2018 to $7.04M last year.
And this was even with the number of acres in the category dropping from 9,708 in 2018 to 6,814 in 2019, perhaps indicating the value already of the hemp crops that have only recently begun to be grown.

A Plethora of Diversity

In the vegetables category and crops under “Miscellaneous” heading, gives one an indication of how diverse the agriculture industry is in SLO County.

Commercial fishing yields were also in the Ag Report, though not included as part of the County’s Ag totals.
Fishers out of Morro Bay and Port San Luis had a decent year, with a total of $6 million coming into port covering some 99 different species of fish and shellfish.
A total of 1.69 million pounds were landed at the docks in both ports with Chinook (king) salmon No. 1 at $2.42M, and some 339,200 pounds.

Settevendemie’s report praises the diversity of the county ag industry.
“Along with the incredible abundance of agricultural production in the county,” he said, “comes a tremendous amount of crop diversity, with area growers producing nearly 120 different types of crops. Whereas some states across the country, or other counties within California, may be famous for producing a particular crop, San Luis Obispo County’s claim to agricultural fame can really be found in its diversity.

“That diversity is made possible due to the wide range of topography, soil types, and microclimates that are found within the county, and those key agronomic factors blend together in an endless number of different combinations to provide ideal growing conditions for nearly any crop imaginable.”

But not all of the report is wine and roses, the Ag Department is also responsible for pest control, and they were busy in 2019.
Settevendemie said, “Our inspectors routinely examine incoming commercial and private shipments of plant material, coming from all over the globe, at parcel delivery facilities, nurseries, farms, and landscape businesses. Inspectors ensure that incoming shipments meet quarantine requirements, and that the received plant material is found free from unwanted pests and diseases.”
Among the colorfully named pests the department looks out for are: Mediterranean fruit fly, Mexican fruit fly, Oriental fruit fly, Gypsy moth, Japanese beetle, light brown apple moth, European grapevine moth, European corn borer, glassy winged

sharpshooter and the brown marmorated stink bug, among several others.
The department put out 5,240 insect traps throughout the county to detect the varmints.
With thousands of traps and tens of thousands of checks of those traps the Department reportedly found 34 light brown apple moths and one Asian citrus psyllid and eradication efforts were initiated.

The department also has less-notable functions — checking the reliability and accuracy of weighing and measuring devices like produce scales in markets, and gas pumps.

They conducted a total of 5,451 inspections of “measuring devices” of which gas pumps were tops with 2,798 inspections. Water (856) and electric (805) meters were among the devices inspected along with water vending machines (129), gas vapor sub-meters (726), for an overall compliance rate of 90.2%.

The department issued 520 citations for violations and took civil administrative actions in 75 cases. 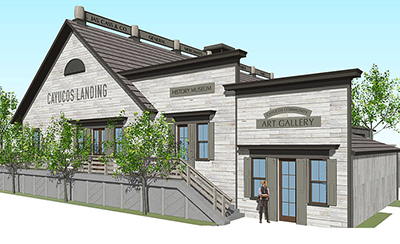