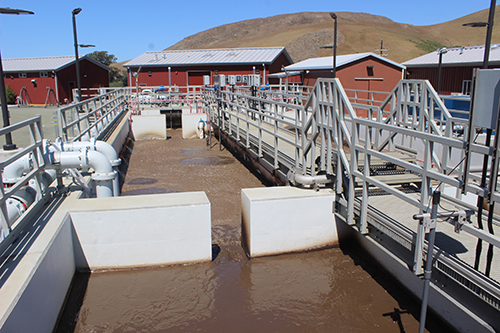 The Cayucos Water Resources Recovery Facility on Toro Creek Road is up and running. The project has been in the works since 2015. Photos by Neil Farrell

The Cayucos Sanitary District’s new treatment plant is completed and already treating the town’s sewage, and by the end of June, it will completely disconnect from the jointly owned plant with Morro Bay, severing almost all ties in a partnership that dates back to the early 1980s.

The $28 million project involved building a “Membrane Bio Reactor” type of treatment plant on a roughly 4-acre agricultural parcel located on Toro Creek Road about a mile off Hwy 1.

It also included upgrading and expanding an existing lift station located on a County-owned parcel adjacent to Hwy 1 at Toro Creek Road; and connecting to one of the two undersea oil loading lines of the former Chevron Estero Marine Terminal to discharge its highly treated wastewater into Estero Bay.

It’s not where they hope to eventually discharge the wastewater, said CSD Board Chairman Robert Enns, who has been on the elected CSD board for some 29 years and helped steer this project forward since 2015.

That’s when Morro Bay, coming off the Coastal Commission’s 2013 denial of their joint project proposed a project that Cayucos would have had to help pay for but would have zero ownership in, including the future uses of the water.

That was when Cayucos declined to continue with Morro Bay and essentially dissolved their partnership with regards to building a new sewer plant project. It was the Regional Water Quality Control Board that in 2003 sent the agencies a letter asking them to upgrade their plant to full secondary treatment and get rid of a 301(h) permit under the Clean Water Act that began the sewer sagas for both agencies.

The two boards have not met in the same room since that 2015 divorce and were it not for the matter of the eventual disposition of the old treatment plant on Atascadero Road, might never meet in-person again.

Enns said the CSD’s stance at this point is that Morro Bay will be “operating a plant that we own 40% of.” How the final disposition of the jointly owned property goes is frankly undecided. “There’s still some work to be done,” Enns said. “We’d not like to see it in the courts.”

And there’s still some work to be done with the CSD’s new plant, as Project Manager and CSD General Manager Rick Koon, said they are now beginning work on a 1-megawatt solar electric plant on another 4-acre parcel adjacent to the treatment plant. So far they’ve graded the site.

REC Solar and the CSD have an agreement wherein the company will build and own the solar plant and sell the CSD electricity at a fixed rate. Koon said they will buy electricity at 0.8¢ per kilowatt for 25 years. By comparison, he said he pays 24¢ to 26¢ a kilowatt now and in 25 years, the rates could be double.

For now, and since the plant went online for testing in early April, they will pipe their discharge water through the old pipes to the plant in Morro Bay and discharge to the ocean.

That’s because they still have to tie-in their new discharge system to the oil terminal’s loading lines, a process made a bit more complicated because Caltrans plans to tear down and rebuild the northbound Hwy 1 bridge at Toro Creek, starting this fall but truly getting underway next spring.

So the CSD has to put in a temporary line to connect with the undersea discharge line and when the highway bridge is completed, a project likely to take 2 years, they will reroute the pipe and hang it on the new bridge.

The CSD hired Sousa Const., for the discharge pipeline work. It’s the same company that got Caltrans’ bridge contract.

Koon and Enns took Estero Bay News on a tour of the new “Cayucos Water Resources Recovery Facility,” as it’s officially called, starting at the headquarters building, which doesn’t look like an industrial facility.

Indeed, all the buildings are red with white trim and designed to look like a farm with a ranch house, barns and outbuildings. That’s how it was designed in order to be mindful of the neighbors, of which there are few given the rural location.

Inside the main administration building, Koon opens a door into a roomy control office, where the plant’s three full time employees monitor the different systems, and can diagnose and isolate any problems that the computerized plant might have.

They can also monitor the plant on a Tablet device, he said, and every night someone will take the portable monitor home with them and be on call. And should anything unusual be detected, they can analyze what it is and respond if needed.

They completed the plant and started testing the systems April 1, Koon said. They already have over 30 days of testing under their belts and last week were testing the ultra-violet disinfection system, a final stage of the treatment process to produce tertiary treated and disinfected wastewater, able to be used for irrigation of farm crops.

They are leaving some open space at the plant for the future, Enns said, as they eventually want to store the treated wastewater in Whale Rock Reservoir, and complete the project’s overarching concept of providing water security for Cayucos.

To do this will require adding a reverse osmosis system to further treat the wastewater.

Cayucos actually has three water purveyors — two private and the County — and all three get their drinking water from Whale Rock Reservoir via the County’s CSA-10 water treatment plant.

The new sewer treatment facility will produce some 365-acre feet of water a year. The town holds title to some 800 acre-feet a year out of Whale Rock. The State Legislature must first pass a law allowing for treated effluent to be stored in drinking water reservoirs. Under State law, all surface waters from lakes, reservoirs, rivers and creeks must be fully treated before being sold to customers.

Koon added that whenever the State takes up that issue, they’ll have lots of data on the quality of the wastewater coming out of the CSD’s plant to make their case.

The project was marred by a fatal accident last year when a worker on a drilling rig at the lift station site was killed when the drill rig broke. Beyond that, they had no other mishaps to report.

The Coronavirus Pandemic did cause a few minor headaches. “It was a little slow getting products out of the vendors,” Koon said. “Manufacturing, availability and shipping — the whole supply chain — was disrupted last year.”

So they compensated by ordering equipment well in advance to make sure it was here when it needed to be.

Right now, the only reclamation water is used for the plant’s needs including the landscaping. The plant has a groundwater well for all its potable water needs, Koon said.

On the tour, we stop first at the two bioreactors, essentially 25-foot deep basins where microbes digest the solids in the raw sewage, after it’s first gritted — a process that removes all the solid things that people flush down their toilets.

The reactors are filled with “Mixed Liquor,” a stinky, brown colored water where the microbes do their magic.

“This is where all the biological treatment takes place,” Koon said. The microbes break down nitrates and ammonia in the two tanks — one of which is pre-anoxic (meaning no air) and the other, larger tanks are aerobic (aerated by big blowers).

Once the biological process, which recirculates a portion of the wastewater back through the tanks to ensure enough flow, is completed, the wastewater is forced through a series of membranes that filter down to 0.8 microns, producing pretty clear water.

Picture long thin hollow strings that the plant sucks the wastewater through, filtering the water of just about everything else.

The water then goes through an ultraviolet disinfection process and is stored in a 130,000-gallon tank ready for discharge or reuse. And while this so-called “Title 22” water is by no means drinkable, it can be used in agriculture.

The membranes must periodically be washed out using a mix of chlorine and citric acid — which Koon said is lemon juice.

The sludge that is produced goes to another building where a screw press squeezes about 80 percent of the remaining water out. The sludge is then dumped in a roll off dumpster that will be taken to Cold Canyon Landfill to cover the trash brought in daily.

It has an earthy smell to it but doesn’t stink like poo.

The filter system has 6,800 membranes in every “module” and there are 16 modules per “rack,” and four racks per tank (two tanks), Koon explained.

That may sound like a lot of maintenance but about every 3 months, they’ll just shut down one side and run the chlorine-citric acid mixture through, leaving them in place.

The CSD got a low interest loan from the U.S. Department of Agriculture in a program designed for rural communities of less than 10,000 populations. Enns said they got a 1.75% interest rate on a $24.2 million loan. Koon added that they also got some $4.5 million in grants making up the project’s total of over $28 million.

Compared to paying 40% of Morro Bay’s now $134 million project — some $53 million — it would appear the CSD made the right move when it chose break with Morro Bay and build its own plant.

The USDA loan came with some “buy American” requirements, Koon said, like the loan required using American iron and steel, so about 75% of the whole plant was made in the USA. It was mostly with the electronics in the plant that they had to buy from foreign sources and some equipment came from Australia, too.

Koon was proud of the fact that the only chemicals being used through their entire plant is for cleaning the membranes, and no chemicals are used in the treatment process itself.

The main contractor on the project was Cushman Contracting Corporation out of Goleta. David Crye Construction of Morro Bay got the contract for the lift station expansion and pipeline up to the new plant.

Enns said the board had essentially three hard decisions to make: First, he said, they wanted to be sensitive to the rural, farming neighborhood and chose colors for the buildings and designs that make it look like a ranch.

The plant is electricity-intensive, but Koon noted that when the solar plant goes online, those costs would be greatly cut.

Enns said they are talking with Cal Poly about leasing the CSD’s extra farmland across the street to the Ag program to do experiments with what types of crops can be grown with reclaimed wastewater, but nothing has been decided yet.

One of the USDA requirements is to learn what to do with the water, Koon said.

And their groundwater drinking well produces 16-acre feet a year and that water could be blended with the wastewater if in the future the requirements for reuse change.

Enns noted that it was 2015 when they cut ties with the City’s plans for a new treatment plant, and they broke ground on this plant in August 2018. It was largely completed by the end of 2020, and now is online as of April 2021. And at the end of June, they expect to cut off delivery to the Morro Bay plant entirely.

They’ve also for many years been replacing the sewer system’s pumps and facilities and will replace lines as needed, Enns said. They’re to the point where now they have mostly a brand new sewer system, he added.

The CSD is hosting a dedication ceremony for the community to have a chance to come tour the plant. The event is set for 2 p.m. Friday, June 25.

To get there, go down Hwy 1 to the Toro Creek Road intersection and turn east. The plant is at 800 Toro Creek Rd., and about a mile off the highway on the right hand side. 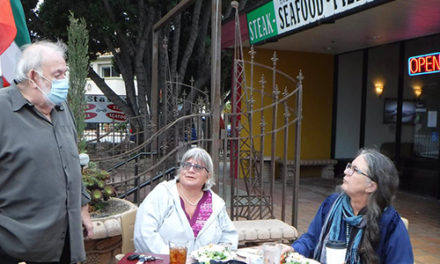 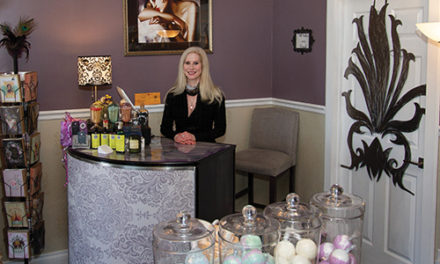 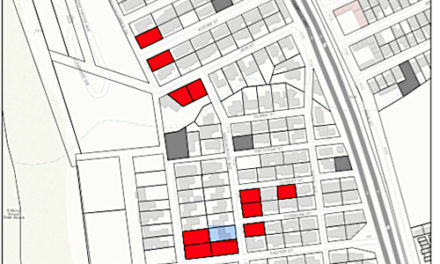 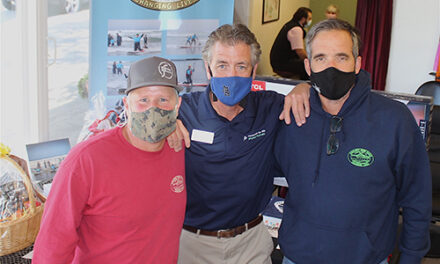