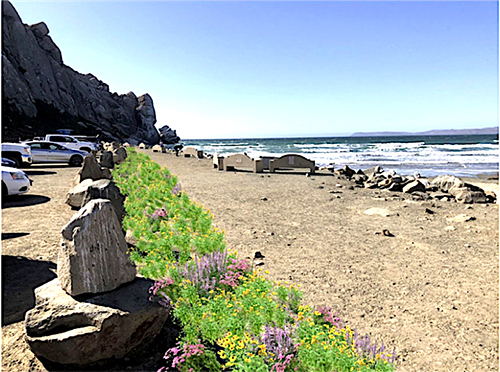 Rendering shows a long row of colorful vegetation growing in a bioretention stormwater basin being proposed for the Morro Rock parking lot.

The City of Morro Bay has thrown its support behind an effort to install storm-water runoff, catch basins in the Morro Rock parking lot, a project being led by a non-profit surfing organization.

The passive systems use natural elements like soil types and plants to filter rain runoff before it reaches the ocean where Surfrider’s members ride the waves. A similar system was recently installed on the Embarcadero just north of Tidelands Park.

“The priority issue area for this round of Proposition 68 funding,” reads a staff report from the City’s Environmental Programs Manager, Damaris Hanson, “is coastal resiliency and nature-based adaptation strategies to address sea level rise impacts.”

City staff has been meeting with the project team, headed up by Daniel Apt, president of Olaunu, to get Morro Bay included in his project to install so-called “bioretention systems” that collect and clean rain runoff before it enters the ocean.

“The primary purpose of this project,” the report said, “is to reduce polluted storm-water runoff, to protect the ocean, waves, and beaches in California and educate surfers and the public about green, stormwater infrastructure.”

Apt’s team would pursue and manage the grants, if they are awarded, and oversee “construction and inspections, host commissioning/education events, and conduct water quality monitoring and operation and maintenance for the first 3 years of the project.”

Nothing about the project has gone beyond the “conceptual” phase, Hanson told Estero Bay News, but they do have a preliminary cost estimate of $700,000, “but again, the project scope and cost estimate are only in concept design.”
She noted that the grant program does not require a City match. Most grant programs do require as much as 25% matching funds but that can be in the form of staff time and effort getting a project permitted and built as well as managing the grant.

The project will have three, linear, underground storm-water retention basins with the longest running just inside the City’s line of large rocks that delineate the parking area from a walkway at the lip of the riprap. In renderings included with the agenda item, the retention basin is shown as a long strip of greenery with flowers and other plants.

“The design includes re-grading and compaction of decomposed granite, directing the surface water to the bioretention areas where the water will be treated, and pollutants removed.”

Morro Rock parking lot, the largest seaside parking lot in SLO County, is dirt with no storm drainage at all. Rainwater tends to gather in the many sinkholes that develop as soil sinks in between the rocks below the surface.

The City has contemplated many times paving the lot but there’s really no underlying road base to support the asphalt.

Now, the City dumps fill dirt and grades the lot smooth a couple of times a year, but it soon sinks again forming a landscape that mirrors the moon and its many craters. It makes for challenging driving.

The project won’t be vetted locally, as the State has jurisdiction.

Hanson confirmed that the project will need a coastal development permit and because the site is in the Coastal Commission’s “original jurisdiction” the Commission will handle the CDP issue, and Olaunu and Surfrider will be responsible for the paperwork.

The Harbor Department this summer has done quite a bit to try and bring some order to what has traditionally been somewhat of a chaotic mess. The department chalked in lines to delineate parking rows and spaces, and created a layout for parking, and also recently set out cement blocks and anchor chains to direct cars entering the lot and moving the exits further west.

The City doesn’t have to do much with the project. “As part of support for the project the City of Morro Bay will commit to collaboration with the Surfrider Foundation and the Olaunu Team on the project including providing review and input on planning and design, educational signage and the operation and maintenance plan; attendance to inspections and training performed by the Olaunu Team and the ribbon cutting event lead by the Surfrider Foundation; and ongoing coordination during the project.

“Additionally, the City commits to assuming the operations and maintenance of the bioretention system after 3 years of operation and maintenance performed by the Olaunu Team and the Surfrider Foundation.” No City monies are needed for the grant program.

From Jan. 4-Feb. 5, 2021 the OPC will do interviews and conduct site visits, and eventually make recommendations to the OPC board sometime next February, with grant awards expected sometime next Spring. 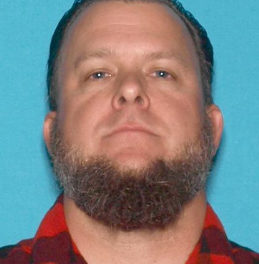