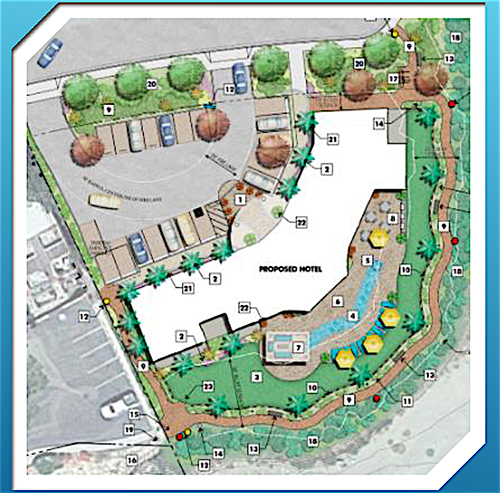 The California Coastal Commission is expected in August to hear an appeal of the County’s approval of a new motel in Cayucos, overlooking the beach at the mouth of Cayucos Creek.

Jay and Lisa Cobb are the applicants on the proposal to build a 17-unit, 3-story hotel/vacation rental project on the 1.1-acre parcel, one of the last vacant pieces of property in Cayucos’ Downtown Area.

The motel building will sit back from the edge of the property and take up 0.7-acres of the site. The rest would be parking, a swimming pool and guest amenities, and a pedestrian trail overlooking the beach.
It would also have space for a retail business and a bar/restaurant on the bottom floor, features that drive up the required number of parking spaces under the County’s rules.

The site is bordered by condominiums on the west, the beach to the south and creek on east, with Ocean Avenue on the north side.
According to the County’s report, “One of the proposed units will be used as a manager’s unit for overnight management staff. The proposed structure includes three stories with a total of 20,114 square feet of floor area. The project also proposes a public scenic vista pathway and public recreation amenities. The proposed outdoor guest amenity area and the public scenic vista pathway will be physically separated by a retaining wall feature which will act as a border to the public pathway.”

The apparent sticking point seems to be parking, which was the main concern from those who sent in comments to the County Planning Commission for its April 22, 2021 hearing on the project’s coastal development permit.

The developers asked the County for a “modification” to the standards in the Local Coastal Program, and reduce the required number of spaces from 77 to just 21. Zoning on their property falls under the County’s “recreation land use category,” according to the County staff report from April.
Among the conclusions the County planners reached was that the proposal didn’t raise any substantial evidence that it would produce a significant impact on the environment, and thus didn’t require a full environmental impact report. Other studies were conducted on the geology, archaeologically sensitive areas, environmental habitats, parking, loading, coastal access, flood hazards, sea level rise and wetlands. None of which raised red flags at the County.

The County sent the project to the Cayucos Citizen’s Advisory Council (CCAC), which after asking for design changes to better match the town’s Old West architectural style, was unanimously approved on March 4, 2020.

Though the project has permits issued by the County it was almost certainly slated to be appealed to the Coastal Commission, as it lies between the high tide line and the first public road, the area where the Commission has jurisdiction under the Coastal Act.

And that’s what’s happened, as an email from Susan Craig, the Commission’s Central Coast Division Manager in Santa Cruz that was posted on Next Door Cayucos, an Internet gossip site.

“We plan on bringing the appeal forward to the August Coastal Commission hearing,” Craig said. The first step is to ask commissioners if there is “substantial issue” with the County’s approval of the project, she added, in a so-called “de novo” hearing.

If no substantial issue were determined, the project approval would stand as is. If the Commissioners take issue with some aspect — like the parking exception — it would then take over the permitting process from the County and another hearing on the project would come at a future date, which could be a few months or year. In any event, the project would almost certainly have additional conditions placed on it by the Coastal Commission.
The public will have a chance to chime in on the project for the Commission’s review.

In letters sent to the County Planning Commission, Steve Rarig, who said he has lived down the street on Lucerne Avenue since 1975, said his main concern was the parking.

“Please accept this letter in opposition to this project,” he wrote, “as I feel the parking exception request from 77 to 21 is going to have a negative impact on myself and other local residences that live on Lucerne Road.”

Michael Tivnon, who also lives on Lucerne, said, “The area around Lucerne Road and Ocean [Avenue] is already highly congested by parking and additional proposed parking for a new hotel would make this much worse. During holidays, the cars are parked passed our house, which is half up Lucerne. This makes trash pickup and other activities very difficult. The proposed hotel will decrease property values and add further congestion to the area.”

And a Bakersfield man, Dante Borradori, said the lot was “virtually all fill material from the building of Hwy 1 [now Ocean Avenue], the Bella Vista Mobile Home Park and Cayucos Highway 1 bypass,” and thus was unstable land.

He argued that the “natural grade,” by which the County measures building heights, “would be 15 to 20 feet below the current surface of the lot.”
He also forwarded a series of historical photos that show the “deterioration of the property due to the convergence of Cayucos Creek and the Pacific Ocean during tidal storm surges.”

Marshall Lewis, a doctor from Bakersfield who also owns property on Lucerne, said that the reduction in required parking means, “These additional 56 cars will be wandering around the Downtown area of Cayucos looking for additional parking. It is clearly noted that the risks to children, grandchildren and adults from vehicular accidents would increase substantially.”

On the other side, Greg Bettencourt, a member of CCAC, wrote in favor of the project. “It is very worth noting that the Advisory Council heard and discussed the project in very considerable detail. At the end of our deliberation we voted unanimously to support the project.”

He said there were three main reasons why the CCAC supported the project — the proposal was consistent with the community’s vision of development on that parcel; it is not out of proportion with the neighborhood; and, CCAC members “were particularly impressed with the effort the Cobbs made to listen to Council comment, tour Cayucos with Council members looking at examples of things which the community prefers and then make substantial modifications to their plans reflecting those preferences. We’ve found that willingness to change plans [without being forced to] is a rare thing.”