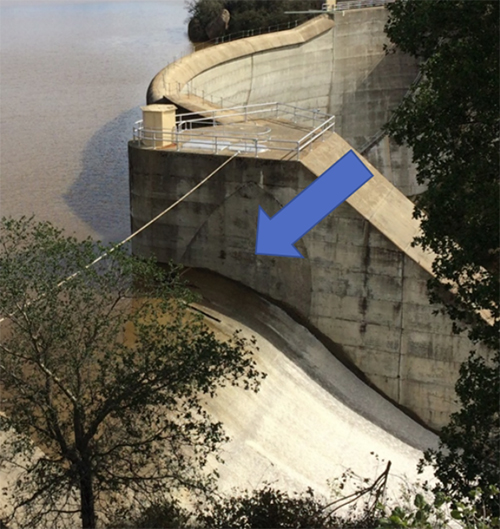 Photo shows the current spillway of the Salinas Dam. The County Flood Control District is seeking to obtain the dam from the Army Corps of Engineers, who built it in 1941. The blue arrow points to where spillway gates might be installed to greatly raise the capacity of Santa Margarita Lake.
Photo courtesy SLO County

The County Flood Control and Water Conservation District is interested in taking over the Salinas Dam from the Army Corps of Engineers, and possibly enlarging the capacity of one of SLO County’s main drinking water reservoirs.

In September, Supervisors authorized the Flood Control District to send a letter of interest to the Army Corps (USACE) regarding the dam’s future, as the federal Government is apparently interested in surplusing the old dam.

Built in 1941 to provide water to Camp San Luis Obispo during World War II, the dam no longer serves any “federal” purpose, though it is a vital reservoir for drinking water for the City of San Luis Obispo.
The Army Corps took it from the Army in 1955 and the County shortly after that took over operations and maintenance but not ownership.

USACE and SLO jointly hold water rights to the dam, with SLO having rights to 45,000 acre feet of water. The County Flood Control District operates it for the city and has recreational opportunities at Santa Margarita Lake.

The dam is 135 feet high, and is built to withstand a maximum, theoretical capacity of 26,000 a.f., and a maximum water level of 1,300 feet. The lake’s surface area is 730 acres and the lake drains an area of 112-square miles.
The dam’s original design called for spillway gates to be installed, which never happened, but if it were to be done, could raise the lake level another 19 feet, from the current capacity of 23,800 a.f. to 41,792, according to the “Proposed Salinas Reservoir Expansion Project” report from 1998.

“The expansion of the dam,” reads a County report, “is a potential opportunity for securing additional water supplies and has been identified in the County’s 2019 Legislative Platform and the Paso Robles Sub-basin Groundwater Sustainability Plan.”
The USACE in 2018 started a “Disposition Study” to identify options for the dam’s future, among them to hand over ownership of the dam to a local agency.

“The Disposition Study includes coordination with local agencies to understand and compare the costs, benefits, and impacts of various alternatives.” The study is now at the point where the Army Corps wants to know if the County is interested in acquiring the dam.

“Additionally, “ reads the staff report, “the House of Representatives passed a bill on July 29, 2020, which directs the Secretary of the Army to expedite completion of the Disposition Study.”

Angela Ford, a water resources engineer with the Flood Control District, said other options include status quo or transfer to a different entity, “if we weren’t interested,” she told Estero Bay News.

The USACE had tried to cut a deal with the City of SLO, she said, to no avail. “This is the first time the District has seriously considered it,” she said.
The USACE has concluded that the dam “has some deficiencies” but those are “low risk” according to federal standards. “The USACE has indicated that the dam would need to be transferred ‘as-is,’ with the USACE only willing to consider providing minimal funding to support retrofit.”

Of course the State of California won’t go so easy. “The California Department of Water Resources Division of Safety of Dams [DSOD], has indicated that seismic rehabilitation of Salinas Dam would be required if the dam were to fall under State regulation.
“Any retrofit or structural improvements, including expanding the dam’s capacity, will require coordination with and approval by the DSOD following the District’s acquisition of the dam.”

The Army Corps conducted a “safety analysis,” Ford explained. It was considered low risk by federal standards, “but State requirements are different.”
Indeed, if the District does take the dam over, the State retrofit requirements kick in automatically, no matter if the spillway gates are installed.

“Transferring ownership and putting in the gate,” reads a SLO County report (see: https://www.slocounty.ca.gov/Departments/Public-Works/Current-Public-Works-Projects/Salinas-Dam-Disposition-Study), “is identified as an opportunity for securing additional water supplies to address needs in San Luis Obispo County in the County-wide Master Water Report.”
Ford added that the District hasn’t done any work to come up with an estimated cost to retro fit the dam, but there is a rough, “back of the envelope” estimate of $30 million to $50 million.

Who would pay that is another detail to be considered, though the City of SLO holds all the water rights. Also to be decided is whether the water could be supplied to other agencies or cities.
If the County wants to expand capacity of the reservoir, which Ford called “a conceptual potential” project, the spillway gates need to be installed.

With Supervisors officially showing interest, the USACE will conclude its Disposition Study likely with a recommendation to turn it over to the County.

County staff said it needs time to understand all the implications with transfer of ownership, including costs.
Ford’s report said, “To prepare for the next milestone in the transfer process, District staff would need to undertake efforts to provide informed recommendations, which would include understanding and defining the technical requirements to retrofit and expand the dam to meet DSOD standards, coordinating with the City to understand the permitting and water rights issues, developing a process to identify and engage additional project beneficiaries.”

It’s possible the dam could help with water issues down the Salinas River, including in the over-drafted Paso Robles Groundwater Basin, as well as water issues in San Luis Obispo.

The Salinas Dam and Whale Rock Reservoir are the two main drinking water reservoirs in SLO County and as such have special restrictions not included at the County’s other two major bodies of water — Lake Nacimiento and Lake Lopez.
For example, there’s no human contact (swimming) allowed in Santa Margarita Lake or Whale Rock, and motorized boats are also prohibited. People can fish from shore or off non-motorized craft but you’re supposed to stay out of the water.

Nacimiento and Lopez both have extensive recreational uses including motorized boating and water skiing.
It should be noted that under State Law, all water coming from lakes and reservoirs or any other surface waters like rivers and creeks, must be fully treated to drinking water standards to fight such water-borne pathogenic microorganisms as cryptosporidium, E-coli, and giardia, among others. 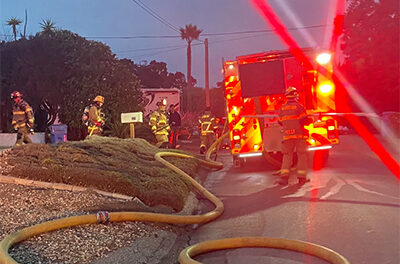