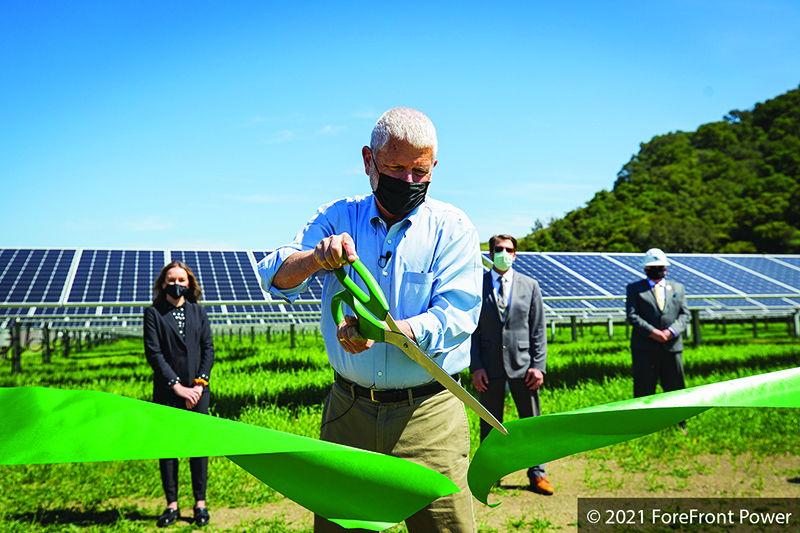 The solar farm was designed, financed, built and is owned by San Francisco-based, ForeFront Power, one of the biggest solar and energy storage companies in the U.S., according to a news release from ForeFront Power.

As Estero Bay News first reported last November, the solar farm covers about 6 aces of former pasturelands adjacent to the County Honor Farm. The project has 3,294 ground-mounted solar panels made in Vietnam that rotate to track the sun, and will be used to offset energy costs for a dozen County facilities including the Juvenile Services Center, Honor Farm, Main and Women’s Jails, County Emergency Operations Center, Sheriff’s Offices and other County facilities in the immediate area.

Over the plant’s expected 20-year lifespan, the County predicts it will save some $6 million in electricity costs.

ForeFront Power will provide electricity at a set rate, somewhat below the normal utility company’s rates. It will also maintain the facility. It marks the third solar project the company has done for the County.

In 2020, the County and the company installed solar canopies in the parking lots at Dairy Creek Golf Course and the County Health Department Campus on Broad Street in San Luis Obispo.

Those two projects produce a total of 552 kilowatts of power and are designed to supply 80% of those facilities’ needs, according to ForeFront Power’s news release.

The solar arrays were just part of the equation in getting the County’s largest solar project online. The installation was pretty much done last year but PG&E had a part to play for it to actually work.

“The PG&E upgrades,” James Cortese of the Gryphon Agency, ForeFront Power’s PR firm told Estero Bay News, “included installing an overhead ‘recloser’ that was installed on their pole. A recloser is an automatic, high-voltage electric switch. Like a circuit breaker on household electric lines, it shuts off electric power when trouble occurs, such as a short circuit.”

Making electricity from solar panels is probably the easiest part of it. Solar panels actually produce direct current or DC power, which is incompatible to the power grid’s alternating current.

“DC-to-AC conversion happens at the inverter level,” Cortese explained. “There are multiple inverters per site, and they are situated at the end of the arrays [rows of panels], as can be seen in the project video. DC is what is produced by the panels; AC is what flows through the grid.

“The inverter outputs get combined, then stepped-up to a higher voltage to make the long-distance run towards the tie-in point. Then we step down in voltage and run a short distance to the main customer electrical panel/switchgear, which is at 480 volts.

“We tap their bus bar between their meter and main breaker. The other meters on-site are offset virtually through the PG&E net metering aggregation program.”

The County’s Energy and Water Coordinator, Annie Secrest, who spearheads the County’s recent move toward solar and battery storage projects, said, “This project is a significant step forward to reaching our County goal of procuring 20 percent of our energy from renewable sources. With this project energized, the County now derives over 12-percent of its energy from solar power. This helps us mitigate increasing electricity rates and better control our operating expenses.”

The County picked ForeFront Power through the State’s “Renewable Energy Aggregated Procurement (REAP) Program” offered by SPURR, a Joint Powers Authority “dedicated to simplifying the electricity procurement process for California’s public agencies,” reads the release. “REAP allows any California public agency to obtain the best solar and energy storage pricing and terms from a competitive statewide solicitation. Over 40 California public agencies have used REAP to develop hundreds of megawatts of solar and storage projects to date.”

ForeFront Power has done over 1,300 community solar projects totaling nearly 1 gigawatt of power, the company said. Frisco is the headquarters but they also have offices in New York City and Mexico City, Mexico. ForeFront Power is a wholly owned subsidiary of Mitsui & Co. Ltd., a global energy infrastructure and investment company.

As for what’s on the solar horizon for the County, Secrest said they are still working on a floating solar-panel project that would go in a pond at the Los Osos Wastewater Treatment Plant to cut that facility’s energy costs. 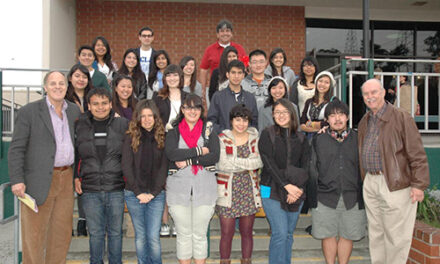 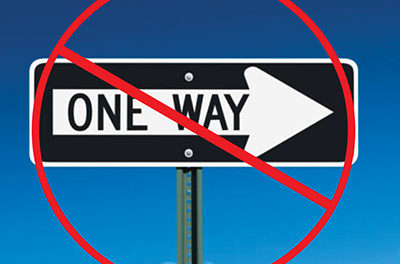