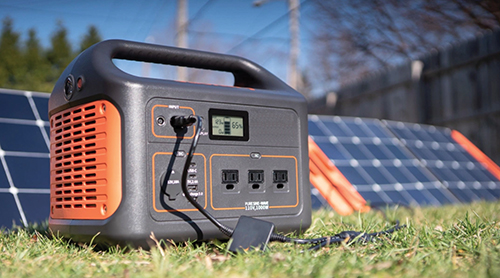 SLO County will buy a new solar-powered portable generator for emergency use during public safety blackouts and to charge up its electric vehicle fleet to keep them running.

The grants are to mitigate the effects of so-called “Public Safety Power Shutoffs” or PSPS, the practice by utility companies of cutting power to certain areas threatened by weather phenomena like high winds that can lead to downed power lines that spark wildfires.
The shutdowns come with some advanced warnings and last until the danger has subsided, which could be several hours or days. The County has many portable gas generators but they can add to the fire danger.

“Currently,” Lopez wrote, “fossil fuel powered portable generators are used by several departments to mitigate the detrimental effects of power loss in their respective areas. Due to the growing wildfire concern in California, the need for portable, reliable generators has never been as important as it is now. With the advancement of new technologies in the field of solar power, a better alternative has been created.”

The generator he wants to buy is much advanced. “The EV Arc by Beam is a complete solar powered generator,” Lopez said, “that can be transported by trailer and quickly deployed anywhere in the County to meet critical needs. The EV Arc requires no existing infrastructure to function and requires no permits to operate. The EV Arc also has its own electrical storage, allowing it to function day or night through grid failures and extreme weather.”
This model can also charge the County’s electrical vehicle fleet when not in emergency use, he added. “This unit will allow for greater electric vehicle infrastructure for day-to-day operations, while being a portable emergency power source when needed.”

He lists the ongoing maintenance costs at $500 a year and will be included in Fleet Services’ annual budget.
The portable generator is at least the second County project designed to address the PSPS’s, as Supervisors approved a project last September to install Tesla battery back-up systems at key County water infrastructure locations — the Lake Nacimiento Intake Pump Station, the Rocky Canyon Pump Station, and the Lopez Water Treatment Plant.

Those systems cost $4.7 million combined and the County got them free through the California Public Utilities Commission’s “California Self-Generation Incentive Program,” or SGIP, which was seeded with $1 billion and designed to provide energy to key infrastructure facilities during PSPS targeted blackouts and power outages due to wildfires. At least two other County water facilities are being looked at for the Tesla batteries.
Estero Bay News asked Lopez last week when he expected to get the new generator and he said the County was in the middle of its budget process and he would order it sometime after that is done.

And the new generator is also part of a larger County effort to go solar at various facilities to cut costs and address climate change.
The Social Services Office on Higuera Street in SLO, and Dairy Creek Golf Course had solar carports installed, and battery systems were put in at the Health Agency campus on Johnson Avenue and across the street at the Public Health Building.

The County also recently completed a 1.2-megawatt solar farm off Oklahoma Avenue (parallel to Hwy 1) that will provide power to the County’s various jails and emergency services and maintenance buildings on Oklahoma and Kansas Avenues. It’ll also help power the new Department of Animal Services shelter being built now adjacent to the solar farm on Oklahoma Avenue.

These projects were all grant funded or done through public-private partnerships that ended up costing SLO County little to nothing. And in the case of the Tesla “Power Pack Systems” batteries, the County will own them after 20 years.
Still to come is a planned floating solar farm on a wastewater pond at the Los Osos Wastewater Treatment Plant off Los Osos Valley Road. That plant will provide electricity to the sewer treatment process.

County Energy and Water Coordinator, Annie Secrest, who has been the lead on most of the solar/battery projects previously said, “Battery energy storage systems provide resiliency to facilities by providing them with a power source during an electrical disruption. In the case of a PSPS or other outage event, backup power is essential for critical County services to continue to be provided to residents.” 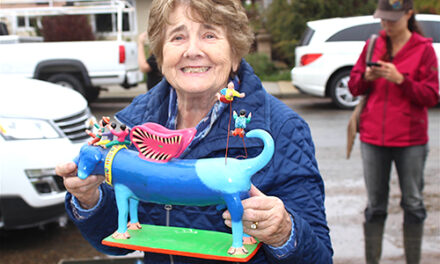