The San Luis Obispo County Jail violated the rights of mentally ill prisoners and used excessive force on some inmates, according to a stinging report from the U.S. Department of Justice, triggered in response to the in-custody deaths of several County Jail inmates.

The Aug. 31 announcement from the DOJ, which was investigated by the Civil Rights Division, said the jail “violated the rights of prisoners by, among other things, failing to provide adequate medical care and subjecting some prisoners to excessive uses of force. The report calls upon the jail to make changes to address the Constitutional violations found during an investigation.”

The report accuses the County Jail and in turn the County Sheriff, of having practices in place that violate the Eighth and 14th Amendments to the U.S. Constitution, and the Americans with Disabilities Act (ADA).

“Our Constitution,” Assistant Attorney General Kristen Clarke of the Civil Rights Division said, “guarantees that all people held in jails and prisons across our country are treated humanely, and that includes providing access to necessary medical and mental health care.”

The DOJ found fault with the jail’s actions. “After a comprehensive investigation,” the agency said, “we found that San Luis Obispo Jail harms the people it incarcerates by subjecting them to excessive force and by failing to provide adequate medical and mental health care. The Justice Department hopes to continue to work with the jail to resolve these systemic problems.”

As one might expect, the Sheriff’s Department was none to pleased with the report’s criticism. “We recognize the issues and concerns brought forth in the DOJ report,” reads a news release from Sheriff’s spokesman, Tony Cipolla. “However, the report fails to take into account the many remedial measures undertaken by the Sheriff’s Office since 2018 when the investigation began.”

He lists seven major accomplishments by the Sheriff’s Department, which oversees all three adult jails — Women’s and Men’s Jails, and the County Honor Farm — they are:

It was the in-custody death of an Atascadero man, Andrew Holland, who suffered from schizophrenia for many years and in January 2017 was having a mental crisis and hurting himself while in custody, which brought these issues to public attention.

So jailers tied him naked into a restraint chair and left him for nearly two days.

When Holland was released from the chair, he passed out about 45 minutes later and died, reportedly from an “intrapulmonary embolism” (a blood clot in the lungs), according to the Coroner.

The outrage from that and several other in-custody deaths mainly caused by drug overdoses, medical emergencies, and suicides, made the 2018 Election very tough for both Sheriff Ian Parkinson and District Attorney Dan Dow, who each faced strong challenges.

The Holland Family, which got a $5 million settlement from the County for their son’s death, contributed heavily to both opposition candidates and also started an advocacy organization for jail reforms (see: andrewhollandfoundation.org).

When a Hanford man, Russell Hammer, in 2018, became the 12th inmate to die at the County Jail since 2012, the FBI was called in by the Sheriff to investigate. This DOJ report is the result.

Hammer’s widow, Margo Benson-Hammer, too filed a claim for wrongful death against the County and Morro Bay Police Department over the arrest in November 2017 of her husband following a domestic violence incident at a Morro Bay RV park.

Russell Hammer was accused of attacking his wife with a knife. MBPD arrested him and he was placed into a mental health hold at the jail. A judge ordered him to be examined by two psychiatrists but he died in custody before those reports were heard.

The County settled Mrs. Benson-Hammer’s claim just this past June for “nuisance value,” according to the County Counsel’s Office. Nuisance value — the maximum they will pay to settle a claim — for SLO County is $35,000.

As for the City of Morro Bay’s possible culpability, City Manager Scott Collins said, “The City rejected a claim filed by Margo Hammer related to the arrest of Russell Hammer and was not named in the Complaint for Damages filed in SLO County Superior Court on Nov. 5, 2018.”

Public outrage was compounded when a surveillance video of Holland’s death was obtained by The Tribune and posted to the newspaper’s website. The sheer inhumanity of Holland’s ordeal was shocking.

The Sheriff made changes to the jail facilities and policies, including turning the old women’s jail into a medical facility and bringing in medical and mental health professionals to work fulltime at the jail.

But the DOJ report focuses on the situation as it existed before all that; hence the condemnation with no acknowledgement of improvements.

“San Luis Obispo County,” Acting U.S. Attorney Tracy L. Wilkison for the Central District of California said, “violated the rights of prisoners in its jail in several ways, including failing to provide adequate health care and subjecting some prisoners to excessive force. Our office is dedicated to defending the civil rights of everyone in this district, including those behind bars.”

The Sheriff was somewhat restrained with his statement. “The Sheriff’s Office,” Sheriff Ian Parkinson said, “has worked cooperatively with the Department of Justice over the past 3 years to investigate deficiencies and determine appropriate improvements to ensure our Jail facility is fully compliant with federal law. We are pleased with our progress so far and will continue to work diligently to provide a safe and secure Jail facility.”

As for claims of excessive use of force, the department said it takes them seriously. “Additionally, the report claims some inmates were subjected to an excessive use of force,” Cipolla’s news release said. “Jail leadership takes complaints seriously. Any allegation of inappropriate force has been investigated by the Professional Standards Unit, and any instances of sustained complaints have resulted in disciplinary action, up to and including termination.”

The DOJ’s Civil Rights Division and the U.S. Attorney’s Office for the Central District of California started the investigation in October 2018 under the Civil Rights of Institutionalized Persons Act and Title II of the ADA, “which authorize the department to take action to address a pattern or practice of deprivation of legal rights of individuals confined to state or local government-run correctional facilities.”

Such investigations are never really closed, so anyone with relevant information about abuse of inmates in the SLO County Jail is encouraged to call the U.S. Attorney’s Office at (844) 710-4900, or email to: usacac.slo@usdoj.gov. 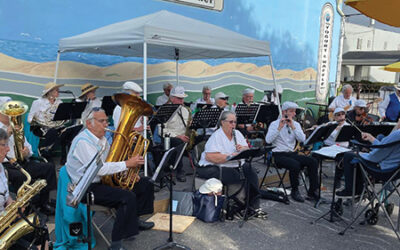