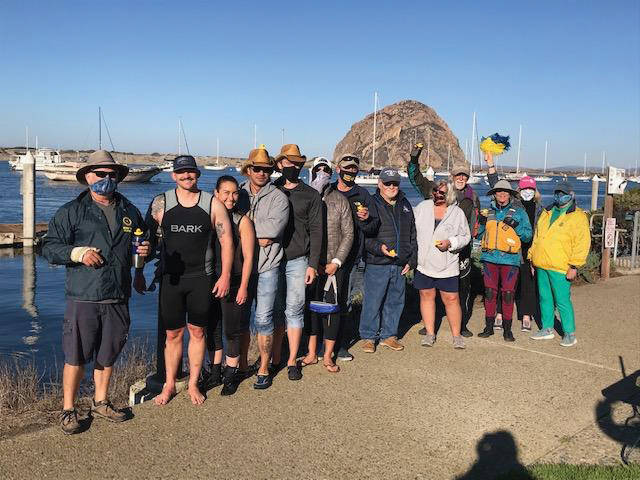 The Rotary Club of Morro Bay  held its 1st Annual Ducky Derby fundraiser earlier this month by releasing 449 yellow rubber duckies into the Bay not fully realizing it was a King Tide,  It was a speedy race with wayward duckies wrangled back in line by volunteers on kayaks and paddle boards.

The Harbor Patrol lent support and at the Tidelands Park finish line, all ducks were retrieved from the water to protect the environment.  While no duckies were harmed in the process, there was a close call.  During a test run, a seagull swooped down and grabbed one carrying it off squeaking before dropping it back in the Bay.

Due to coronavirus restrictions there was no crowd, but there were some on-lookers including John Solu out for his early morning walk. The event was live streamed, but Wi-Fi was difficult in the Bay so the video filmed by videographers Zeke and Landis Turley is posted on the Club’s FaceBook page: “Rotary Club of Morro Bay”.

Cash prizes for the 3 fastest duckies were:

$300 to Sandra and Tom Souther from Fresno
$200 to Steve Knuckles, our member & MB Fire Chief from Atascadero
$100 to Arra Gilpin, mother of our member Heidi Kimbrell from Morro Bay
F

undraising Chair and President Elect, Tim Olivas announced the proceeds would go to support Club’s “Help Us Help Others” Campaign to support local health, safety and education projects.  After the winners learned that the funds would go to support projects like the SLO Food Bank, Got Your Back and Salvation Army, all three chose to donate their winnings back to Rotary!

The Show Must Go On, Eventually 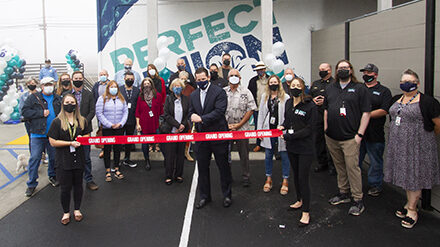