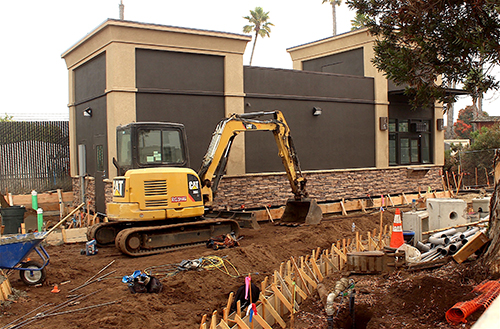 Workers with Kirk Construction General Engineering Contractors of Atascadero were pouring concrete curbs for drive-up lanes at a new Human Bean drive-thru coffee house, at 839 Morro Bay Blvd., across the street from the Morro Bay Police Station.
Readers may have noticed the construction when it started at the beginning of August, and might think the building was put up magically by Harry Potter, as it was that fast.

Indeed, a witness across the street at Pacific Premier Bank said the building came in one piece on a trailer, and was lifted and dropped into place in an afternoon.

It will have two entry lanes for ordering that will merge into one at the pick-up window. There will also be a walk-up window but it won’t have any on-site seating.

According to the company website, (see: www.thehumanbean.com), The Human Bean was begun in 1998 in Ashland, Ore., and is now a chain of some 91 drive-thru coffee shops in 11 States.