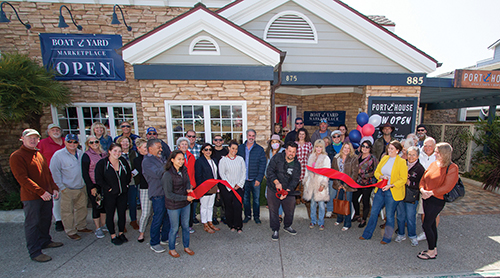 The Morro Bay Chamber of Commerce turned out recently to cut the ribbon and officially open,
‘The Boat Yard Market,’ 875 Embarcadero. Photo by Dean Sullivan

A new mini market, selling snacks, beer, wine and locally sourced food stuffs and gifts, has opened in the heart of The Embarcadero, and the owner sees it as a support business for his bread & butter venture of renting you-drive electric boats.

And the owner of a 40-foot luxury yacht, “Toast the Coast,” has launched a new 6-pack charter business that promises to take you.
Nick Trujillo, who has owned the Bay Cruisers electric boat rental since 2016, located in the Boatyard Center, 845 Embarcadero, just launched “Boat Yard Market,” at 875 Embarcadero in front of the Port House Restaurant, in a space that’s been mostly empty for the past several years, but had been the original home of Morro Bay Hat Co., (now at Dutchman’s Landing).

Trujillo bought Bay Cruisers from Tom and Joeli Pauley in 2016 and had been running the business for them since 2009, he explained sitting in the ne market, which is nicely decorated with a country market feel to it.

“With the electric boats,” Trujillo said, “Everybody always asks where they can get beer and wine and snacks.” He noted that there really isn’t a “market” where someone can get these things. He’s long wanted to open the store and leased the vacant storefront last November. But a few unfortunate accidents, including his mother being in a serious car crash last December, led him to close his businesses to help her in her recovery.

When Port House opened after an extensive remodeling and rebuilding of that lease site (which was the Otter Rock Café for nearly 25 years) and the Boatyard Center next door by SLO businessman Cliff Branch, Sextant Winery had a small shop in the space, Trujillo explained. He used to buy wine there. “I came in one day and it was gone,” he said. When he saw Branch, who is also his landlord on the docks, “I said, ‘I’ll take it,’” he added.
It’s taken this long to get the business up and rolling, including an extended time to get the Pauley’s off-sale liquor license into his name. “It took 6 months to get the liquor license transferred,” Trujillo said.

His mother, who is still recovering from the crash plans to come work in the market on weekends, and he’s happy about that. Her used car lot in Atascadero isn’t going to survive the coronavirus pandemic business crunch. He’s philosophical about that. “We [Bay Cruisers] were one of the lucky ones,” he said. “Our business was up 67% last year. My mom’s car lot took a hit and she’s closing it now.”
Though he cold be considered seasoned in the boat rental business, Trujillo admits to being a novice with the new market. “I hope it works out,” he said,

“It’s all new to me.”
He’s trying to sell as many locally-sourced products and items as he can, pointing out that one of the best local products, Cayucos Hot Sauce, finally came in to the store. Cayucos Hot Sauce is owned by Lars Naschime, a Cayucos native son who developed the unique recipe using special hot peppers grown in Costa Rica, where he also manufactures the hot sauce.

He’s gotten a surprise with his early clientele — guests at waterfront motels. “There’s no rhyme or reason to it,” he said, adding that they come in the mornings and evenings too, and for some reason he sells a lot of Advil and Aleve.
He’s forever grateful for the many friends who came and helped get the market open. “It’s taken a village to get through it,” he said, referring to both the store and his mom’s recovery from severe injuries.

“People donated their time, painting and designing the interior and logos, all kinds of stuff.”
Boat Yard Market is open from 10 a.m. to 7 p.m. weekdays and 10-8 weekends. Eventually he wants to adjust the hours to 8-8 to coincide better with the closing of the nearby restaurants and businesses.

And a new boat charter business has opened at the Boat Yard Center docks, which already have Rock Kayak and Bay Cruisers.
Woody Clark opened, “Toast the Coast,” with a 40-foot yacht of the same name for so-called 6-pack charters.
He’ll take you inside the bay, Clark said, or out on the ocean. Your group can go whale watching or fishing, cruise up to Cayucos or down to Avila Beach. He’s got Champagne and liquor and is available for weddings or burials at sea. “We spread my grandmother’s ashes at sea,” he said.
He also books charters through Project XO, whose owner, Hannah Lique Naitove, bills herself as a “Date Night Planner,” specializing in such bookings for special occasions.

It also took some doing to get up and running. He’s been trying to get going for 9 months, he told EBN.
The Toast is a big, roomy boat with a cabin, a sofa couch in the salon, a shower, restrooms and even a wet bar. He calls his business a “private luxury charter.”
“There’s nothing like this around here,” he said, “from Monterey to Santa Barbara, there’s nothing like this.”

He said his boat could easily fit many more than six passengers but his license limits it to just half a dozen.
To book a charter you can call Project XO at 603-313-4015 or email: hannah@project-xo.com. Or call Clark at 805-704-2628, email: woody@toastthecoast.com. His website is: www.toastthecoast.com.
Estero Bay News welcomes these two new businesses to the community and wishes them both great success. 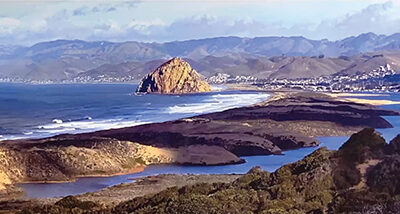 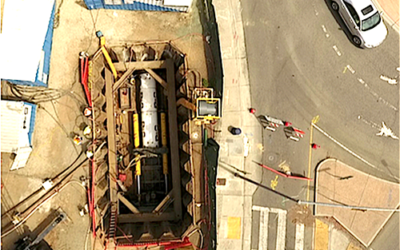