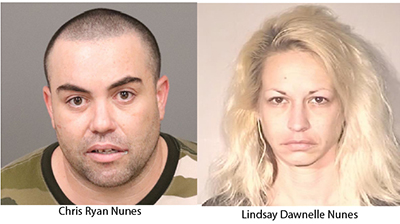 Morro Bay Police, with an assist from Atascadero P.D., arrested a married couple allegedly in the midst of a burglary crime spree across SLO County and beyond, and reportedly catching them with a van-full of stolen items.

According to a news release, on Dec. 8, 2020 a tourist in Morro Bay told police her car was broken into while parked at Morro Rock and the thieves stole her purse with several credit cards. The thieves got busy, fast.
“It was discovered,” MBPD said, “that multiple purchases were made with the stolen cards throughout the City of Morro Bay and the City of Arroyo Grande.”

Video surveillance at one crime scene in Morro Bay led to the identification of a Dodge Caravan associated with the suspected crooks.

“As more evidence was collected, investigators learned that both subjects were also wanted on burglary charges in Colusa, Calif.,” MBPD said.

A few weeks later, on Jan. 4, police said the man with the Caravan was reportedly spotted smashing multiple car windows using bolt cutters. Police found the Dodge the next day (Jan. 5) at Motel 6 on Atascadero Road.

Police arrested a female suspect but her alleged male accomplice gave them the slip when he took off in the van. Police said “Multiple items of stolen property were located in the motel room.”

MBPD put out a “be-on-the-lookout” alert on the van and driver, whom they’d identified as Christopher Ryan Nunes, 34, after the arrest of his wife. He turned up in Atascadero on Jan. 6.

“A traffic stop was initiated,” police reported, “resulting in a short foot chase into a business,” where APD detained Mr. Nunes. And to the apparent surprise of police, Mrs. Nunes was free from jail and allegedly back to old tricks.

A MBPD detective responded to Atascadero “and discovered both Christopher and Lindsay [after being released from jail] were engaged in a commercial burglary spree in the City of Atascadero. The associated vehicle was searched, and multiple items of stolen property were recovered.”

Police returned some of the recovered property to several SLO County businesses but their investigation continues. Anyone with information regarding this incident is asked to contact the Morro Bay Police Department at (805) 772-6225 or Crime Stoppers at (805) 549-STOP.