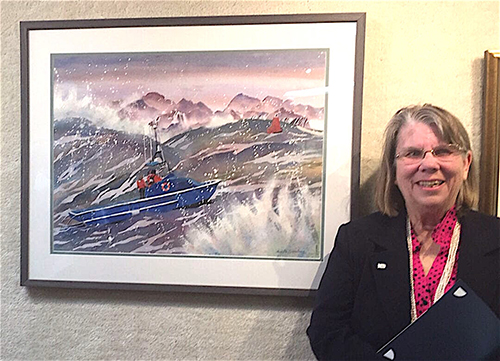 Morro Bay artist, Ardella Swanberg, is shown with her painting ‘Harbor Storm,’ which will be auctioned off by the Friends of the Morro Bay Harbor Department as part of a fund-raising drive to help repower a used patrol boat the City is buying from Port San Luis. Submitted photo

The Friends of the Morro Bay Harbor Department continue to raise money to help refurbish a used patrol boat and are conducting an on-line auction for a piece of fine art painted by a local artist.

The Friends group is auctioning off the original painting, “Harbor Storm,” done in 2019 by Ardella Swanberg with bids being taken until 8 p.m. Monday, Dec. 21 (see: https://friendsofthembhd.org/art-auction-harbor-storm).
Harbor Storm was painted from a photo Swanberg took of harbor patrol officers in a boat eying stormy seas and huge breakers at the harbor entrance.

“It was very scary to watch,” she said, “but four or five of the Harbor Patrol members stood calmly as the boat bounced up and down on the waves. I thought about it until November and decided to paint the scene to enter it in the Central Coast Watercolor Society 2020 Aquarius Show.”

The painting was not only accepted for the Aquarius Show but also made the cover of the show’s brochure and won the “Chris Van Winkle Memorial Award.”

A native of California, Swanberg said she’s lived most of her life away from the Golden State, spending time in Texas, Minnesota, Michigan, Spain, Florida, North Carolina, Maryland, and Malaysia.

“We have lived in small towns, bustling cities, and out in the country,” Swanberg said. “In 1998 we moved onto a 1,000-acre ranch in Cayucos to be near family and enjoy the country life. We moved to Morro Bay in 2015.”

Her works are available at Art Central in SLO, the Gallery at Marina Square and at the Morro Bay Art Center in Morro Bay.
All of the proceeds from the sale of the painting will go toward the Friends’ goal of raising $110,000 to pay to repower and re-equip a used Radon Craft patrol boat that the Harbor Department plans to buy from Port San Luis Harbor Patrol.

The boat will replace a workhorse of a boat that has been in use since the early 1980s but must now be replaced. Though the twin engine Radon is a fine vessel, and still has life left in it, perhaps as a personal sport fishing boat, it no longer passes muster for use in the kids of search and rescue calls the Harbor Patrol often goes out on. 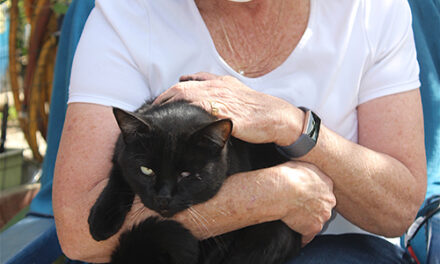 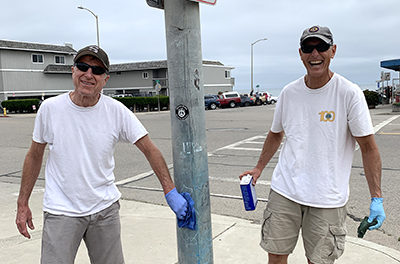