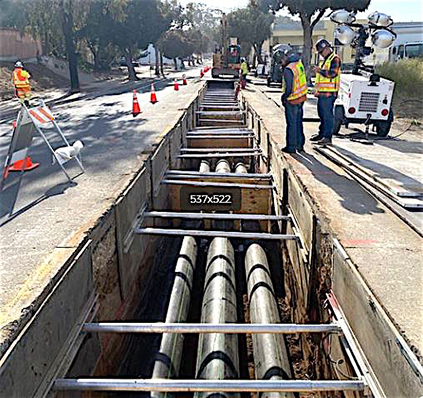 Work on the conveyance system for Morro Bay’s Water Reclamation Facility project continues on Quintana Road and at four other sites in town, in ‘Phase 2’ of the now, $144 million project. The pipes shown here were being installed on Quintana from Main Street to the first shopping center.

Traffic has been mostly one-way on Quintana with flagmen controlling the flow. The contractor, Anvil of San Francisco should now be wrapping up the relocation of a water main at the intersection of Kennedy Way and Quintana that closed that intersection completely for the past couple of weeks, and reopen it within the next few days.

Anvil also has a major construction site at the other end of Quintana from LaLoma to South Bay Boulevard and has taken over a property at the Roundabout, displacing the U-Haul Store that was there. U-Haul is supposed to move to the corner of Main and Hwy 41 at an old Shell gas station site.
The Roundabout site and another on Las Tunas consist of huge holes in the ground to allow the four pipelines of the project to be installed via horizontal drilling underneath the Roundabout.

The company is also building lift stations on Atascadero Road at the City Maintenance Yard, and on Main Street next to the Lemos Ranch Pet Store. It is slated to start work soon on a pipeline that will run from Lift Station No. 2, located deep below the Front Street parking lot near the Maritime Museum, through the power plant to Main Street to connect with the new lift station at Lemos Ranch.
Anvil’s contract for the conveyance system was $31 million but subject to change orders as the work progresses should unforeseen complications be dug up.

Readers are advised to be alert for construction-related traffic — trucks, excavators, heavy equipment — going through construction zones, be mindful of detours and obey the flagmen. Photo courtesy City of Morro Bay. 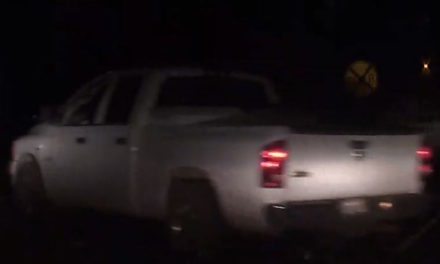