Sheriff’s deputies are looking for the man and woman that reportedly assaulted a juvenile boy inside his house in Cambria, forced entry under false pretenses, and then fled the scene.

According to Sheriff’s spokesman, Tony Cipolla, at about 2:30 p.m. Tuesday, June 15, a strange woman knocked on a door in the 1600 block of Richard Ave., Cambria.

“A male juvenile was inside his home when a woman came to their front door to complain about their dog being loose in the neighborhood,” Cipolla said. “The male juvenile exchanged words with the woman. The woman left but a few minutes later returned with a man who entered the home and physically assaulted the male juvenile.”

The couple fled the scene and the young man called 9-1-1. Deputies searched the area but were unable to locate them.
“Detectives are asking for the public’s help in identifying the suspects,” he said. The man was described as white, approximately 40-60-years old, 5-feet 9-inches tall, thin build, with short greyish colored hair, and wearing a grey shirt.
The woman was described as white, approximately 50-60-years old, 5’4” tall with shoulder length blond hair, glasses, wearing a blue and white striped shirt.

They need the neighbors’ help with tracking the couple. Detectives are looking for any home surveillance video from residences in the area with a time frame 1:30-3:30 p.m. June 15 that might have captured images of the suspect(s) leaving on foot in the area of Richard Avenue, Stuart Avenue or Bradford Road.

If readers have information regarding this case, contact the Sheriff’s Detective Division at 805-781-4500. Information can also be reported anonymously through Crime Stoppers at (805) 549-STOP (7867) or through the website: www.slotips.org. 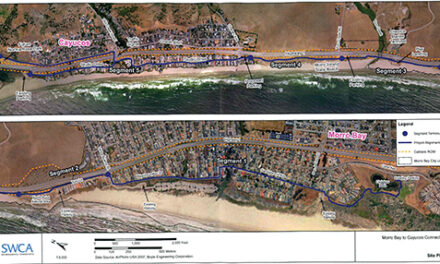