The Natural World King Tides Coming to the Central Coast 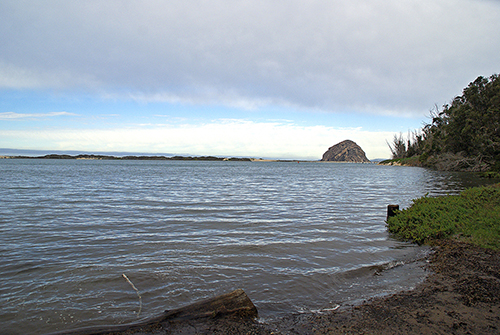 Windy Cove at King High Tide in January of 2015

Every year with great anticipation I await the announcement of the California King Tides Project. This is a project of the California Coastal Commission and photographers can have a lot of fun with it and help science in the process.

The California King Tides Project calls on us to photograph our highest high tides and lowest low tides of the year. Beginning in November for a period of days around the shining of the full moon, we experience a dramatic rise in sea level. This in-rushing water floods the bay and estuary leaving little dry land for birds and other sea creatures. Documenting these tides helps scientists to preview the impacts of sea level rise and understand how the shoreline is affected by high water. Participating in this project will have you contributing to an important community science effort. Conversely photographing the corresponding lowest tides shows the extreme outflowing of the water exposing areas that are not seen at any other time.

Tide chart books list in feet the low and high tides for this area. You will also find out what time of day each level occurs, and this is listed for each month of the year for a 24-hour time period. Tides levels and times are different for each area of the coastline so you would need a tide chart book for the area where you are located. Tides in Southern California are very different than tides for the Central Coast. The California King Tide Project lists King Tides already occurred on November 15-16, but more are coming December 13-15 this year and for locations north of Vandenberg/Point Conception again on January 11-12, 2021.

The California King Tide Project answers the question as to what causes sea level rise and why King Tide information is important:
“The rise in sea level we’re experiencing now and will experience in the future is caused by burning fossil fuels like coal, oil, and natural gas. Carbon dioxide in our atmosphere acts like a blanket, trapping in heat that would otherwise escape. When we burn fossil fuels, we’re adding more carbon dioxide, ‘thickening the blanket’ and warming the planet and ocean. Sea level is rising because land-based glaciers and ice sheets are melting into the ocean and because water expands in volume when it warms. The amount of sea level rise we will ultimately experience will depend on how quickly we stop burning fossil fuels.

King Tides themselves are not caused by sea level rise but allow us to experience what higher sea level will be like. King Tides are the highest high tides of the year, about a foot or two higher than average tides, which corresponds to the one to two-foot rise in sea level expected during the next few decades. When you observe the King Tides, imagine seeing these tides (and the flooded streets, beaches, and wetlands) every day. Understanding what a King Tide looks like today will help us plan for sea level rise in the future.”

You can participate in the California King Tide Project by going to the website at california.kingtides.net and uploading your photos either on the website or with a free app for your phone. You can also see photos of other coastal areas and access a map of all the King Tides photos from the past few years.