Working Together to Alleviate the Homeless Crisis

The combination of the high cost of housing and low wages in SLO County creates economic insecurity and increasing rates of homelessness. The San Luis Obispo League of Women Voters recently held their final meeting in a series that discussed how to alleviate the issue.
The webinar, held June 21, was the fifth in the Lunch with the League series designed to provide an overview of the issue as well as talk about solutions to the growing problem with a panel of policymakers and service providers.

“Homelessness is a complex and critical issue for our community,” said Ann Havlik, League co-president, during the meeting. “We have been focusing on education of this topic, to try to understand and learn about the challenges for understanding and addressing the problem and advocating for change.”

The results of the 2019 Point in Time count, a measure of the number of sheltered and unsheltered homeless people on a specific day, recorded there were 1,483 individuals in San Luis Obispo County who met the HUD definition of homelessness. This represents an increase of 32% from 2017. Of those, 79 percent of the homeless were without shelter, 68 percent were men, 32 percent were women, and none identified as transgender.
Nearly 300 were considered chronically homeless and 144 were veterans. Of those veterans, 97 percent live without shelter. Ten percent of the total population is under 18 years of age, 11 percent are 18 to 24, and 79 percent are 25 or older.

The latest numbers show that 38% of the county population is at risk of being homeless.
“When we look at the scope of the challenge ahead of us,” said Carolyn Berg with County Social Services, “I think we all understand that we can’t possibly do this alone. A big focus this year is how can all the various partners and communities really come together to make the biggest impact. That’s going to take deep partnerships across all those agencies but also community members.”

Other partners are the community-based organizations that provide food and shelter as well as guidance to services for those in need.
Cities throughout the county are an important part of the plan as well. Local governments develop affordable housing and implement initiatives such as Safe Parking, which allows individuals and families with vehicles a safe place to temporarily park overnight, in designated areas, while they transition to permanent housing.

Public spaces that become homeless communities of sorts, such as Palisades Avenue near the library in Los Osos, are a common concern that panelists said the right resources in the right places could alleviate.
“These are human beings, they have rights in our society to occupy space,” said Atascadero City Councilwoman Susan Funk. “If we’re going to be successful, we have to have more frontline resources in every community that people can get housing and shelter so that they’re not dependent on living in Mitchell park, or Atascadero’s Sunken Gardens, or the Bob Jones trail or whatever space it is that we’re wanting to be able to share.”

Housing and the stability that comes with that is the first objective, said Janna Nichols, executive director of the 5 Cities Homeless Coalition.
“Our priority may be to help them deal with any number of other issues, but it starts with housing. Once we have someone housed, then we can continue to work on other issues. The issue around health, the issue around longevity, the issue of all the social complexities, the burden to the community, everything becomes less when someone is housed.”

Nichols said that the problem is getting worse despite countywide efforts to implement programs and services.
“When you have more than a third of your income being spent on housing and life support,” Nichols said, “you are at risk of homelessness. In a community where you have more than 32% of your people at risk, you have an exponential increase in the frequency of homelessness. In San Luis Obispo County we are at 38%. There is a spectrum of services that are needed from housing to what are you going to do today, because that housing isn’t going to come tomorrow. So whether it’s tiny homes, whether it’s sanction camps, the spectrum of services, starts with housing, because that’s ultimately what we want people to do, but, we have to be prepared and respond proactively along the continuum of services that are needed, and that, I think, is something that we’re challenged by.”

The expectation of the webinar was not to produce an immediate list of solutions but to have a focused dialogue. The overall consensus was that governing bodies, social services, and community organizations play a vital part in ending homelessness.

“We as a community need to come together on this, and we each have a role that we can play,” said Nichols. “Let’s all decide that we’re going to do something, but let’s do it together because it’s going to take some systemic change. We need to keep this conversation going.”
To watch the webinar, go to https://my.lwv.org/california/league-women-voters-san-luis-obispo-county/event/homelessness-how-can-we-alleviate-crisis. 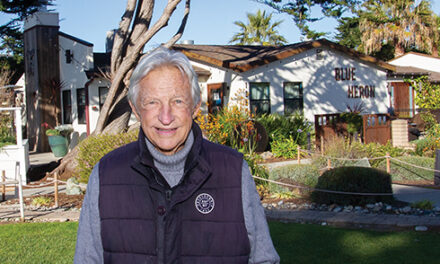