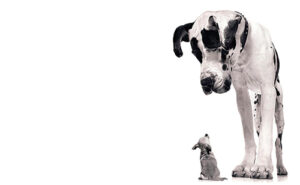 In this month’s column, part 1 of things that a dog owner does that may be, that are most likely, confusing their dog. Many times people don’t realize just how differently the canine brain works compared to our human brain, so one will often address canine behavior as they would human behavior, and that can produce much confusion for the dog. The result of which can be ineffective training and inefficient responses to behavior that you are trying to change.

Lets start with play. For puppies and young dogs, being mouthy is part of their natural development. They explore everything with their mouths, much like toddlers. Dogs also play with other dogs using their mouth. To your puppy, you’re just another puppy. One of the ways to inhibit your puppy from biting and chewing on your hands is to never have them anywhere near the dog’s mouth. This means no wrestling, no finger pointing or waving, no hand playing at all. Use a toy to teach your dog that’s what goes in its mouth, and that’s when you engage in play. If the pup bites your hand instead of the toy, the game ends for a few minutes. Then go back and try again. You want the puppy to learn that only the toy goes in its mouth. Never raise your hand to threaten your dog or give them a smack. It’s essential that hands should always be associated with nothing but affection and food. The dog should know that when any person (especially children) offers a hand to them, good things will happen.

Next, inconsistent vocabulary and rules. Everyone in the home needs to be using the same vocabulary for training purposes. If one person says down for laying, and another person uses it for jumping, that’s confusing. Decide what word is going to be used for specific behaviors. I often suggest putting up post it notes around the house for people to refer to. Use words that address the behavior (sit, stay, halt, off, etc.). The word “no” is NOT a behavior. It’s more productive to teach the dog what behavior you want, rather than what you don’t want. Rules are something that should also be consistent. Make them and enforce them. The humans decide what they are and everyone follows. It doesn’t matter what kind of rules you want to make, as long as they are enforced by all. If you decide it’s ok for the dog to jump on people, great! If you decide the dog is not allowed to jump on people, then it is enforced by everyone. No one gets jumped on, not even when playing.

Inadvertently reinforcing fear and/or anxiety. This is a really common thing. Again, because people often assume that dogs think like humans, they use positive reinforcement to help the dog relax. What’s actually happening is that, in the dog’s head, the calming soothing words are reinforcing whatever headspace the dog is in at that exact moment. For example, your dog is showing fear at a person you are engaging. Most people will try to calm the dog by saying, “it’s ok, good girl”, and stroking her gently. In the dog’s mind, you are telling her it’s ok to be fearful, she’s hearing praise for what she is doing in that moment. Small dogs especially, when they’re afraid, often get picked up and soothed, thus reinforcing the fear/anxiety state of mind. It’s important to recondition any fear/anxiety response, but it needs to happen using the dog brain, not the human brain.

← Previous: Looking for Harmony County to Get New Bookmobiles →

By Susan Vasquez  When I hear news about Ukraine, I don’t think of global politics. I think about a man who sold me...

Story and Illustration by Catherine Kornreich I feel like I’ve been robbed. I’d like to be introduced to the majestic...