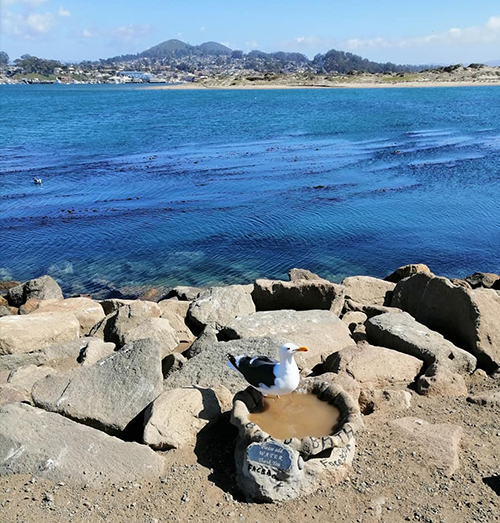 The  ‘Morro Rock Bird Bath Brigade’ is asking for volunteers to help keep this birdbath, located near Target Rock, filled with clean drinking water for the area’s wildlife. Submitted photo

In what’s becoming an increasingly harsh world, it’s good to highlight a bit of humanity peeking through the fog.

Such is the case in Morro Bay where some volunteers are dedicated to helping out some of the wildlife — mainly birds — that Morro Bay is famous for.

Back in October 2021, explains Regina Prokop, a self-described lover of nature who moved to San Simeon because of the elephant seals of Piedras Blancas, she literally stumbled upon a calling.

That October, she says she tripped over what she thought was a low-lying rock, one of millions that litter the whole Morro Rock area. “Then I realized it’s a birdbath,” she says.

Indeed it was a birdbath and one that has a history, too. Over a decade ago, the late-Marge Leggerton of Los Osos, a fierce defender of animals, from cats and dogs to ground squirrels, started taking care of the critters at the Rock.

Marge and some friends put out a couple of concrete birdbaths using cement to affix them in amongst the rocks. They blended in so well as to be almost invisible.

Then she and others would fill the dishes with fresh water, and put out some food too, for the squirrels and the birds.

Some in town frowned on the gesture and someone actually smashed the birdbaths with a sledgehammer. That set Marge off on a firestorm, with her paying a visit on the Harbor Department to express her displeasure. One should never mess with animal lovers.

A truce was reached and a new birdbath was installed and the practice resumed, until Marge’s death a few years ago. So while Marge is gone, the birdbath has apparently survived, no doubt filling with rainwater but otherwise unattended until Regina stumbled onto it.

“I got a 3-gallon bottle of water and a brand new toilet brush and I started filling it up every other day and then every day,” she says.

That kind of devotion to wildlife living at the edges of civilization in what can be a pretty inhospitable environment is also not new.

For many years, several people cared for the large colonies of feral cats that had been abandoned over the years at Morro Rock, left to fend for themselves, even as they bred out of control.

The feral cats were divided up into three distinct populations — grays, blacks and Siamese — each staking out territory in different areas of the Rock’s 34-acre base, making homes amongst the poison oak bushes and tumbled boulders.

Volunteers with Homeless Animal Rescue Team in Cambria and the folks who’d been caring for them got together and trapped every feral cat on Morro Rock in a campaign that took months.

All were spayed and neutered and many were tamed down and released on area ranches as mouse-catchers; while others were adopted by the public. And a few had to be put down due to illness.

They successfully removed a significant, invasive predator that had decimated the native wildlife — from songbirds to potato bugs — and did it in a humane manner. It wasn’t long before songbirds returned to Morro Rock and the ecosystem was restored.

Regina, who is planning to return to Las Vegas, bought a small sign that she installed at the birdbath asking people to pour some water into the bowl to help the animals.

She also started a Facebook Page, see: www.facebook.com/groups/375610191039747 where volunteers for the “Morro Rock Bird Bath Brigade” — as she’s dubbed it — can coordinate their efforts and share photos of wildlife at what’s becoming a true watering hole, used by all of the Rock’s denizens. She says a recent vacation opened her eyes upon her return.

“I went to Paris November 6th through the 16th,” she says. “I came back and that thing was dust dry and full of sand, and I felt so bad.”

She’s hoping that enough people will volunteer to mind the watering bowl that she can have some peace of mind that her beloved wildlife are being cared for, even if in just a small way.

It should be noted, that authorities frown on people feeding birds and squirrels “people food” — from Fritos to French fries — as it isn’t good for the animals and can lead to the critters losing their fear of man, a survival instinct.

Plus, as cute as they are, ground squirrels are wild animals and should be treated that way; the same goes for seagulls. People are often bitten by squirrels when they get too close.

But simply pouring clean drinking water into a bowl and then leaving them to it, is not the same as tossing Fritos to a flock of seagulls.

So if readers are interested in actively volunteering with the Bird Bath Brigade, go to the Facebook Page to connect with other volunteers. Or next time you’re down by Target Rock, seek out the birdbath and pour some watery love into the bowl for the animals, and for Marge and Regina, too.