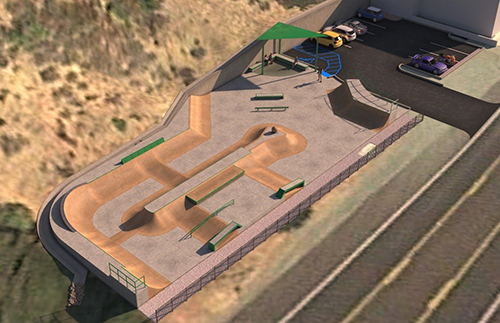 A rendering shows plans for the skate park in Cambria. Photo submitted.

Two years ago the skatepark on Main Street in Cambria was leveled leaving skaters no place to ride or hang out with friends and enjoy recreation their way.

Soon after, Skate Cambria was formed with a youth run board directors in place along with a core group of adults with the mission to rebuild the park.

“Often Cambria is known to be a retirement community,” said Juli Amodei, Skate Cambria project manager. “I’m here to tell you it is not; there are families in this community, there are children in this community. When they start taking away things that allow them to show themselves, especially a recreational space on Main Street, how do we know there are children besides the school district? You can’t lay everything on the school district when it comes to recreation. The only other thing we have is our county park at Shamel, and that’s a swing set.”

With 3,000 signatures in support of their goals, Skate Cambria began a capital fundraising campaign with an estimated goal of $650,000. The final cost of the project won’t be determined until it goes out to bid and the County weighs in.

Near the close of last year, the wheels really started turning when the Cambria Community Services District, which oversees the land, passed a resolution to commit a total funding amount of $178,000, over the time period of 3 fiscal years, in the amount of $59,333 each year. But the news was even better.

Plans for the concrete 6,000 square-feet skatepark are not full of bowls or vert ramps but instead include a mix of street and transition features such as grind boxes and rails that will support skaters with a range of interests and abilities. It will be open to skateboarders, roller skaters and scooter riders.

“It’s not meant to be a pro park,” Amodei. “We want kids there and their scooters and to have respectful space so that all different ages can enjoy the park.”

Funds banked for the skatepark are currently close to $400,000, not bad for less than two years.

“It speaks to people’s passion of understanding the needs for our children,” said Amodei. “Even during a time of uncertainty of COVID, of financial uncertainty, it speaks to how much a community can come together in partnership.”

Skate Day is a chance to close the $250,000 gap in needed funds. It takes place on Saturday, March 12 in the Vet’s Hall parking lot, 1000 Main St., from 12 to 4 p.m. Fifteen skate pros are slated to attend including skateboard prodigy Lazer Crawford and X Games Skateboard Street gold medalist Ryan DeCenzo.

“The Central Coast has never seen anything like this before, not on this level of industry” Amodei said.

All proceeds go to help rebuild the Cambria Skate Park. Entry is free, but donation areas will be set up, so bring your wallet to help out.

“We feel strongly that our people in attendance will understand, by the course of being there and education,  what we’re doing and give us a 20 or a five or a 10 whatever they feel that they can do,” Amodei said. “All of it goes to the park.”

For more information or to donate, go to skatecambria.com.