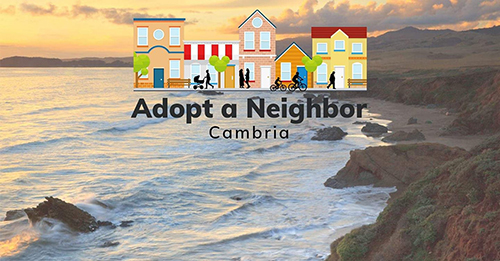 Adopt a Neighbor-Cambria was started to help out fellow community members during the coronavirus pandemic.

In March of this year, the county began to face shutdowns due to the Covid-19 crisis. Most of the communities sheltered at home and began to fear even the most basic tasks like grocery shopping or trips to the post office. That is when Morro Bay’s own Giovanni DeGarimore, owner of Giovanni Fish Market, had the idea to gather a group of volunteers to help out their fellow community members.

Giovanni began a Facebook program called “Adopt-A-Neighbor.” It grew to surrounding areas and soon became too large to manage. Giovanni then reached out for locals to step up and help. In Cambria, that volunteer was Susan Ladrie-Mackey. Susan began administering the site on Facebook and gathering Cambria volunteers and connecting them to their neighbors in need. Those in need of help could sign on to the page and Susan would find someone to run their errands.

By mid-April there were more than 200 people following the Facebook page and most were people willing to assist.

“When someone was making a grocery store run, we would just post it and ask if anyone needed anything, and if they did, we would get it for them,” Susan said. “We would even hunt down the hard-to-find items at the time.”

The FB page also became a valuable source of information for neighbors. If someone found toilet paper, for example, they would post where they found it and others were able to secure those items as well.

As Cambria slowly eases up its restrictions, the page has become mostly an information site, though there are still many Cambrians that are unable to venture out, due to risk factors. One volunteer, who wanted to remain anonymous, is still making a Costco run for several people that provide him with their list of needs. “Cambria’s demographic is mostly 65 or older and are a more vulnerable category,” he said. “I find it gratifying to provide a service for my community. I have about 15 families on my list that I shop for. I have it all organized on a spreadsheet so I can navigate the aisles efficiently and get in and out quickly.”

The errands have slowed a bit, now every other week, but the volunteer says, “if the spikes continue, more and more people will stay at home, and I might have to go back to weekly shopping trips.”

Many Cambrians have reached out to their neighbors in so many ways. The Rotary Club has delivered meals to families in need, food banks have been set up, and the community bus will still take residents to appointments, although only one at a time. And for social needs, several neighborhoods have gathered outside on their streets, at a safe distance, to enjoy music concerts.

According to Susan, the Adopt-a-Neighbor program might continue once the mandated orders have been lifted.

“It has been a good, reliable source of information for our neighbors,” she said. “I’ve gotten a lot of great feedback on how helpful it has been for people seeking resources during this unprecedented time. Neighbors helping neighbors is what makes Cambria such a special place.”

You can find the group on Facebook at Adopt A Neighbor-Cambria.

← Previous: Should That Baby Bird Be Out of Its Nest? PG&E Launches Emergency Planner →