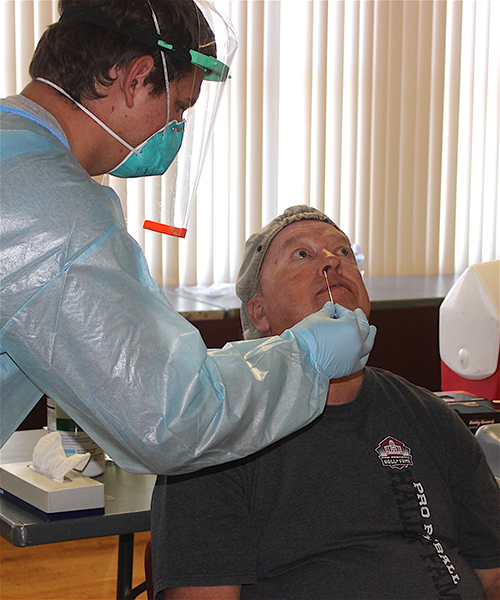 Estero Bay News reporter, Neil Farrell, is about to take a free, COVID-19 test on June 17, administered by the County Health Department at a special pop-up testing site at the Morro Bay Vet’s Hall.

The test consisted of a technician, decked out in protective gown, pants, shower cap, mask, glasses and gloves, sticking a cotton swab deep up Farrell’s nostrils — both sides — for 5 seconds each.

Farrell said it was somewhat uncomfortable and made his nose tickle as if he had to sneeze, but was over quickly and soon forgotten. He said residents should think about getting tested, given the amount of concern that’s going around.

“The County’s pushing real hard to test as many people as it can,” said Farrell. “There was no charge and all I had to do was show identification [Driver’s License]. They didn’t ask where I live or anything personal at all. I gave them my cell phone number and they were supposed to text me my results after a couple of days. I think everyone should get tested — while it’s still free.”

What were his results? “I don’t have the virus,” Farrell said, with a modicum of relief.

The County has several permanent testing sites and will be doing these pop-up test sites around the County, see: www.readyslo.org for a schedule of upcoming pop-up clinics and for information on the Coronavirus response in SLO County.