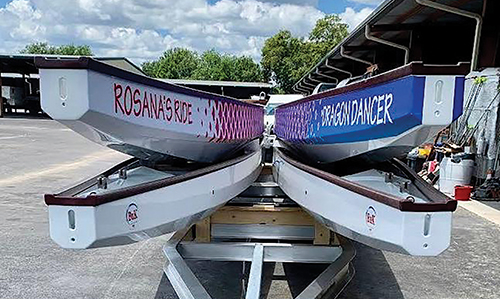 Two new dragon boats, Rosana’s Ride and Dragon Dancer, that were purchased with funds raised in the community. Photo submitted.

Dragons will once again glide across the water in Morro Bay.

The Central Coast Dragon Boat Association (CCDBA) will welcome two new vessels during a “Dragon Awakening Ceremony” on May 28 at 10 a.m. at Tidelands Park in Morro Bay.

The sport combines athleticism, art and tradition dating back 2500 years ago in China. The 40-foot long, canoe-like vessels with brightly painted, ornately carved dragon’s head and tail weigh about 500 pounds and are powered by a team of up to 20 paddlers working in synchronicity along with one steer person and one drummer.

“Dragon boating is a unique water sport because of the teamwork involved. There are no star players,” said Sandy Mitchell, CCDBA community outreach chair. “Twenty people work together, doing the same thing at the same time, to move the boat. The stroke works the core and the legs. The rhythm and concentration on the stroke make the stresses of the day melt away. When everyone is paddling together in time, the boat glides along the water seemingly without effort. It’s a tremendous feeling of power and unity. One beat, one boat.”

Dragon boating is the reportedly fastest growing water sport in the world, with teams in 89 countries. Locally, the non-profit CCDBA officially formed in 2014. The founding team, the Central Coast SurviveOars, began as a group of cancer survivors and supporters in 2007. Now, CCDBA welcomes everyone to participate.

“The goal of CCDBA is to open up dragon boating opportunities to everyone in the community, and to support cancer survivors through the sport of dragon boating,” Mitchell said.

The new boats came from a company in Florida that specializes in vessels used in International Dragon Boat Federation (IDBF) races. They cost $10,000 each, plus an additional fee for the head, tail, and drum, and were purchased following a community fundraising effort led by the Central Coast SurviveOars during the pandemic.

“Due to the community’s generosity, we raised more than enough money to buy one boat,” said Mitchell. “One of our long-time paddlers, Rosana Ortiz, was fighting cancer during the last part of 2021; she and her family made a substantial donation so we could get two new boats. I am very sorry to say, Rosana passed away in March. One of the new boats will be named in her honor: Rosana’s Ride.”

Rosana’s family will be present at the Dragon Awakening Ceremony. The second boat is named Dragon Dancer.

“This name reflects the nature of dragon boating — every one on the team moves in the same way, at the same time — like a dance,” Mitchell said. “The name was chosen by paddler vote.”

The 30 to 45 minute ceremony is based on a thousands of year old Chinese tradition that involves ‘opening’ the eyes of the dragon with paint, a little incense, a call to the water spirits, and the revealing of the names of the boats. The Cal Poly Lion Dancers will perform a traditional dance to bring good luck and fortune to all in attendance.

“After the dragon eyes are ‘opened’ and the boat names revealed, we will paddle the boats around the bay near Tidelands Park, so everyone can see what the sport involves,” Mitchell said. “We will even stage a mini-race.”

When the new dragon boats arrive later this week, CCDBA will have a total of three boats — the two new ones, plus Puff a smaller boat that holds 10 paddlers. The group recently retired Joanna’s Joy, which was built in 2009 and has been here in Morro Bay since 2011. She had taken on water in the hull due to a defect and was donated to the Morro Bay Maritime Museum for display and education.

After being closed down for a year due to the pandemic, the nonprofit is recruiting new paddlers and new teams,. Any group of 10 or more people can form a dragon boat team.

“We have volunteer coaches and steerspersons who can help get a new team started in Morro Bay,” Mitchell said. “This is a great team-building sport; businesses can sponsor employee teams. There are racing opportunities throughout California; and, with our two new boats, local teams can race each other.”

Almost anyone can participate in this sport; it does not require a particular body type or skill. Teams can be made of all ages and genders.

“You will step off the boat feeling stronger, better, and part of the team.” Mitchell said.

Dragon boat races are held throughout California from March through October. There are one-day and two-day festivals, with competitions in several divisions: Men’s, Women’s, Mixed, Masters (seniors), Youth, College, and Cancer Survivors. Most races are either 250 or 500 meters. The latter is about 5 and a half football fields and takes about 2 minutes, 40 seconds to cover.

So far this year, local teams have competed in Marina Del Rey, CA and in Tempe, AZ. Paddlers are scheduled to compete in Castaic Lake and Long Beach this summer. In April 2023, a team of cancer survivors will travel to New Zealand for the International Breast Cancer Paddlers Commission (IBCPC) Dragon Boat Festival.

For folks not sure it dragon boat racing is their fit, anyone can try the sport first as a guest paddler. Readers who want to give it a shot can go to CCDBA.org, pick a practice time from the schedule, and register for the practice 48 hours in advance. The first try is free and then $10 after that up to three times.

They practice in Morro Bay, launching from the dock at Sub Sea Tours, 699 Embarcadero #9 at the intersection of Pacific and Embarcadero.

Anyone interested in forming a team should contact Sandy Mitchell, at director3@ccdba.org. For more information, check out ccdba.org.