Friends Indeed of the Harbor Department 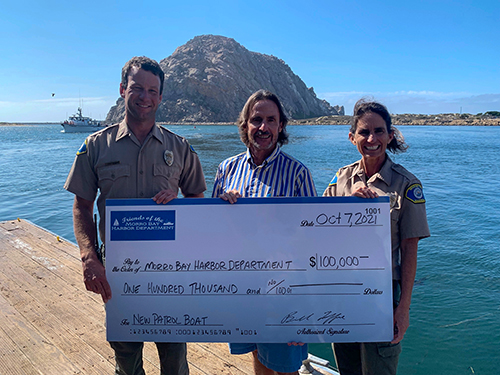 The Friends of the Harbor Department completed its latest mission to help improve harbor services in Morro Bay, paying to re-outfit a patrol boat and help keep the department’s fleet afloat.

The Harbor Department announced that on Oct. 7 it got a check for $100,000 from the Friends to help retrofit a used patrol boat it got from Port San Luis to replace the department’s old warhorse Radon Craft patrol boat that was falling apart, literally.
The “lightly-used” patrol boat was purchased last year using an $85,000 grant form the State Department of Boating and Waterways, according to a news release from the department.

But simply getting the boat wasn’t going to cut it for what Morro bay needed it to do, missing certain equipment like better firefighting capabilities to meet its needs. Ordinarily, the department would save up money, and hunt up grants to put together enough to buy a custom-made boat (usually a Radon), which could cost upwards of $300,000.

The Friends launched an ambitious fund-raising campaign in September 2020 to raise $100,000 to help with the boat’s upgrades. “One year later,” the news release said, “they successfully reached their goal, with 80% of the funds raised as individual contributions and 20% as a matching grant from Castle Wind. The vessel is expected to be harbor-ready by April 2022.”

Castle Wind is one of several companies that is trying to get a license to build a 1,000 megawatt floating offshore wind energy farm about 30 miles off the coast at San Simeon. The power would be brought ashore at the closed Morro Bay Power Plant to connect with the power grid. It is also expected to feed energy into a proposed Battery Energy Storage System (BESS) facility at the power plant under consideration by the planning department, part of the State’s vision to support sustainable and carbon-free energy.

Friends President Bill Luffee said, “Working alongside the Harbor Department on this fundraising effort has been a true privilege. I have tremendous respect for the hard work they do on a daily basis, and being able to support them with a $100,000 donation toward retrofitting a patrol boat is an incredible honor.

“That said, I’m really just a facilitator. The real credit goes to our friends and community, to those who purchased art through our fundraisers, participated in our wine auction, and donated money specifically for this cause.”

The proverbial Bakersfield Navy keeps them busy. “With an average of 1.1 million visitors each year, Morro Bay sees a high volume of inexperienced recreational users in the bay and ocean.”

The Friends of Morro Bay Harbor Department’s mission is to help improve the harbor services in Morro Bay and they have done a variety of fundraisers, including a memorable outdoor drive-in, movie night at Morro Rock.

A non-profit, the organization relies on donations “from people who want to make a difference and preserve the beautiful Morro Bay Harbor.”
The Friends are also deep into fundraising effort to refurbish a lifeguard tower. Learn more at: friendsofthembhd.org.

← Previous: Get Into the Karaoke Spirit A Different Perspective on Cayucos Vets Hall →

A Harbor Patrol boat tows in a white Bayliner that was saved from sinking with three people rescued off Montaña de...

Morro Bay Police have arrested a local man on a slew of felony charges after he allegedly slashed the face of his...

Here’s the City’s rendering of potential improvements to Coleman Park and the Harborwalk area heading out towards...