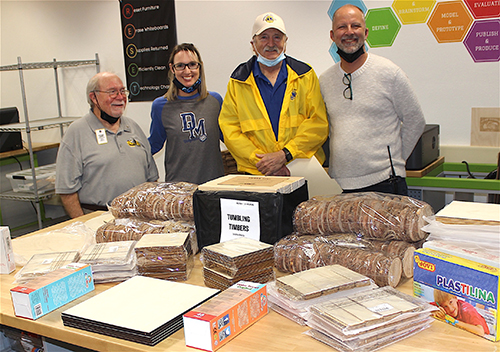 The Morro Bay Lion’s Club, fresh off being named the 2022 “Non-Profit of the Year” by the Chamber of Commerce recently spread their goodwill to the local elementary school.

Lion’s Club President, Chuck Stoll, himself the 2021 Citizen of the Year, was on hand to donate $1,000 to Del Mar Elementary School, part of a campaign of giving by the statewide organization, and one of just a handful of grants awarded in the program.

David Hubbard, who sits on the California Lion’s Club Foundation, said the organization decided to give out 1-time educational grants for “back to school” necessities. “Each area was given $2,500 to work with,” Hubbard said. Twenty-eight Lion’s Clubs — two per district, came forward with grant proposals and Del Mar got one of just 36 available.

Hubbard said they wanted to focus on STEM-related educational things and the Del Mar lab fit their bill. He said the back to school grants are a 1-shot thing. “Most schools ask for classroom supplies. We talked about STEM.”

The other grant in the district, he said, went to Fillmore Middle School in Ventura. He said the local Lion’s Clubs had to put together an action plans for the grant monies, which were reviewed by a committee and while he sits on that committee, he said he had to recuse himself from voting on this district’s proposals. But he knew the criteria back and forth and so was able to help them put together a winning application.

Del Mar Principal Michael Wood said they wanted to use the grant monies in their computer lab. He explained that the San Luis Coastal School District Foundation built the computer labs at the district’s elementary schools and Del Mar’s is located in what years ago was the school kitchen, after a big remodel about 20 years ago turned what used to be the cafeteria and multi-purpose room into a library.

The lab is stocked with various things that get depleted with use. Among them are wood pieces that are used with the lab’s laser printers and Plastilina, a modeling clay.

He said with the computer lab the kids can be creative, open-ended and entrepreneurial. “They can experiment, test, analyze and re-think their work,” Wood said. The décor and colors used in the lab are key. For kindergarten through fifth grade kids, he added, it’s how they respond when they walk in the room. “Even the look of the room is exciting to the kids,” Wood said. “It fuels a kid’s imagination. It literally lights them on fire.”

The motto of the lab is “Innovation — The future is a place we create.”

Local Lion’s President, Stoll said of the lab, “There’s a lot of motivation for these kids.”