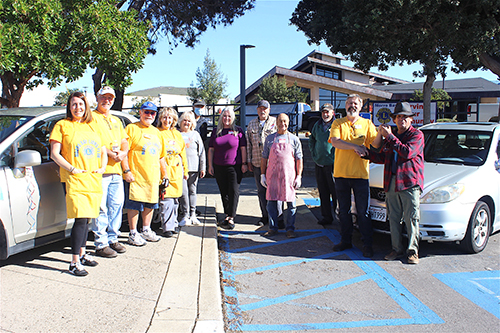 Donny Peluca of Morro Bay is the 35th person to receive a free car in the Morro Bay Lion’s Club’s Car Giveaway Program. Peluca, at far right, gets the keys to a 2008 Toyota Matrix and a congratulatory handshake from Lion Bill Todd who started the program. Also pictured are Lion’s Club members taking a quick timeout from the Thanksgiving Community Drive-Thru Dinner on Nov. 25. Photo by Neil Farrell

A tireless volunteer is the latest person to be gifted a free car by the Morro Bay Lion’s Club’s car giveaway program.

Morro Bay resident, Donny Peluca, received the keys to a 2008 Toyota Matrix SUV at the Lion’s Club’s drive-thru Thanksgiving Community Dinner in honor of the many volunteer activities the 64-year-old does on a regular basis. Peluca said he volunteers at the Lion’s Monday Night free dinners at the Vet’s Hall, secures food for the event from local stores and helps with the group’s bottle and can drives.

He heads to Los Osos to help Los Osos Cares with their dinners and volunteers with the weekly food bank program. He’s lived here permanently for 12 years, he said, but first became familiar with the area in 1982. “It’s very beautiful here,” he said. Oh, and he also volunteers with his church. All that requires reliable transportation and the little Toyota was a welcomed gift he will put to good use.

Lion, Bill Todd of Todd’s Garage and one of the co-founders along with Estero Bay Alliance for Care’s, Sharon O’Leary, of the quarterly car giveaway program, which with Peluca’s ride brings their totals to 35, said the car belonged to one of his customers at the shop who no longer needed it. The Lions bought the car from him and now it belongs to Peluca. It’s the 35th free car they’ve given way.

Usually, Todd and his son Mike go through the vehicles for the program, fixing anything that’s wrong and making sure they pass smog check. With this car, “It didn’t need anything.” And he knew the car’s maintenance record, because his shop did the work on it.

Todd said they might have already found their next car to give away, a Nissan Versa with just 55,000 miles on it. It too was owned by an elderly customer who is no longer able to drive.

But there’s a man in town that lives in a van with four dogs and the van won’t pass smog anymore and in California, that’s a vehicle’s death sentence. He’s in dire need of new wheels, Todd said, but a Nissan sedan won’t do. Todd said they are trying to find a nice van for the guy.

If readers have a vehicle they no longer need they can donate it to the program and receive full Blue Book value as a tax write off. If it doesn’t run, Todd said they can use it for a parts car, sell it or scrap it to support the program. They also accept cash donations, which are needed to pay for necessary new parts. Call Bill Todd at 805-772-1985 if you have a car for the program.

If you are a deserving person who needs reliable transportation and would like to ask about the car giveaways, contact O’Leary at the Resource Connections Office, 805-225-1991.

They are scheduled to give away their 36th car in March or possibly April, Todd said, and are taking applications now. “Hopefully there’re more people deserving of a car.”