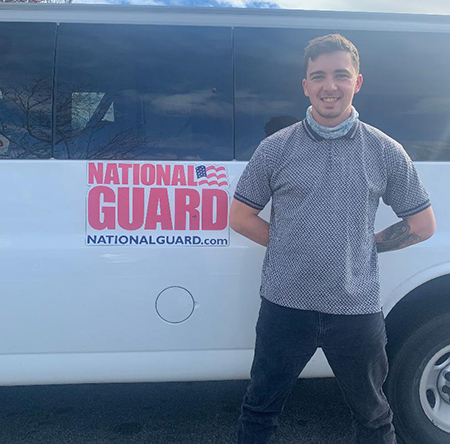 Los Osos resident Trevor Butler enlisted in the California Army National Guard last month, one of the reserve components of the United States Army.
The National Guard organizes, trains, equips, and resources community based land forces, and, on order, mobilizes to support state and/or federal authority.
“If I could make even the smallest difference to one person that would mean a lot to me,” the 23-year-old told Estero Bay News. “That would kind of make everything that I’m about to go through worth it. I wish I was leaving tomorrow, honestly. I’ve been working out every day, just getting ready, and I’m ready for anything that they could throw at me.”
Butler was born in Visalia, CA and was raised in Los Osos. He has worked in construction throughout SLO County since he was 16-years-old. He said he enlisted for the benefits and training he will get.
“I wanted to push myself to new limits; I just wasn’t getting that at work,” said the 2014 Morro Bay High School graduate. “I just wanted to see what else is out there for me. I’m taking a pay cut, compared to what I make in construction, but at the end of the day, I think I’m going to be a lot happier,”
He enlisted as an infantryman and hopes to do construction management for the Guard and get in good physical shape.
“Trevor is a go getter and is very eager to push the limits as far as his physical and mental strengths,” said recruiter Staff Sergeant Leo Castillo. “I feel like he sees this as a challenge that he’s been longing for. He shows up every time we meet up with a smile on his face, and a very positive attitude. It makes me very happy. He is proud to serve his country, state, and community.”
Butler aims to volunteer for a 3-year deployment with the Army and get as much active duty training as possible. He is hoping to be deployed to Poland in December, but is not sure if he will be released from his unit. Already, he has plans for a second enlistment.
On March 22, Butler leaves for 22 weeks of basic training at Fort Benning, Georgia. Currently, he is working with Castillo once a week doing drill to prepare for basic training.
“Whether it’s the working out stuff or just military jargon and military, customs and courtesies so that when they get to basic training, they have a leg up,” Castillo said. “They are kind of ahead of the power curve. The National Guard is the only component that does that.”
Butler’s parents are Jason Butler and Amanda Valena, and he has three siblings, all of whom he said are excited for him and supportive. He will miss the Central Coast, in particular the beach.
“Last night, I was running the Sand Spit toward The Rock watching the sunset over the ocean, and I just thought to myself ‘I’m really going to miss [this],” he said. “I don’t think there’s another place in the world that’s quite like Los Osos and the Central Coast.”

Another county resident, Garrett Tice of Templeton, also joined the guard. Tice joined after serving four years in the United States Marines. His military occupation specialty will be a combat engineer.
Combat engineers help soldiers navigate combat missions by constructing bridges, clearing barriers with explosives, and detecting and avoiding mines and other environmental hazards. Tice’s rank will be E4, which is a specialist.
“Garrett has two supportive parents, David and Peggy Tice, who couldn’t be prouder of their son for continuing to serve his country and be a major contributor to civil support efforts within the California Army National Guard,” said Castillo.
Some locals might recognize Tice who works at First Defense Firearms in Morro Bay.
Castillo stressed that talking to him about recruitment is not a high-pressure pitch.
“I try to change the stigma of the negative connotation that recruiters have,” he said. “This is your career, this is your life. If you don’t want to join the National Guard, I’m not going to beg you, I have a roof over my head. But if you really, truly want to do something for the betterment of your life, then just hear it out. If it’s something you don’t want to walk away from it.”
Anyone interested in more information about joining the California Army National Guard may contact Staff Sergeant Castillo at (805) 538–8311, or follow him on Instagram.