The California Transportation Commission has allocated several million dollars towards the replacement of a busy Hwy 1 bridge in Cayucos, part of a more than $1.18 billion award to transportation projects up and down the state.

The money is from Senate Bill 1 (SB-1) and the “Road Repair and Accountability Act of 2017,” according to a Caltrans news release. These tywo sources account for over half the total, some $630 million.

Among the numerous funding awards, $12 million was allocated to replace the Hwy 1 Old Creek Bridge, located near the 24th Street Beach Access in Cayucos. “This project will also include improved bridge rails, guardrail, highway shoulders and rock slope protection,” Caltrans said. That project isn’t slated to begin until late 2022.

The State also allocated some $1.9 million to install “Accessible Pedestrian Systems [push buttons], countdown pedestrian signals and crosswalk signs to improve pedestrian and bicycle safety in various locations on State Routes 135 and 246 and US 101 in San Luis Obispo and Santa Barbara Counties.”

“California has the most heavily-traveled transportation system in the country,” said Caltrans Director, Toks Omishakin. “Today’s investment will allow Caltrans to make critical repairs and upgrades to our state’s roads and bridges, increase options for transit, rail, walking and biking, and support thousands of jobs.”

The Old Creek Bridge won’t be the only major highway project through Cayucos, as Caltrans expects next spring to get started on replacing the Hwy 1 northbound bridge over Toro Creek.

Built in 1941 as part of the original, 2-lane Hwy 1, the northbound Toro Creek Bridge has been determined to be structurally deficient and it’s also not wide enough to accommodate bike lanes, and so the plan is to replace the northbound bridge to match the southbound one, which was built in 1961 but does have the width to allow for Class III bike lanes.

In the meantime, the contractor, Souza Const., will be moving utilities and get ready to reroute all the traffic onto the Southbound bridge this fall, in preparation for construction expected in the spring on a job that could take 2 years to complete.

And some day the new bike lanes on the new bridge might be moot, as there is a plan awaiting funding to build a Class I separated bike and pedestrian path running along the bluff top between the highway fence and Dog Beach.

That so-called “Cayucos-Morro Bay Connector,” would provide a safe route for cyclists and walkers separated from traffic. Initial designs and environmental reviews are completed for that project but construction money has proven elusive thus far.

“SB 1 provides $5 billion in transportation funding annually,” Caltrans said, “split between the state and local agencies. Road projects progress through construction phases more quickly based on the availability of SB 1 funds, including projects that are partially funded by SB 1.

For more information about other transportation projects funded by SB 1, see: rebuildingca.ca.gov. 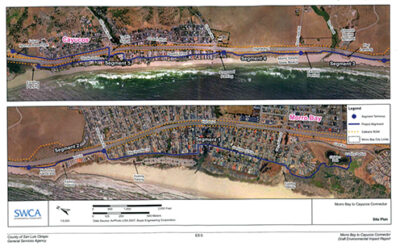 A bike lane will connect Morro Bay and Cayucos Things are looking up early in 2023 for a long-sought-after, safe, bike...