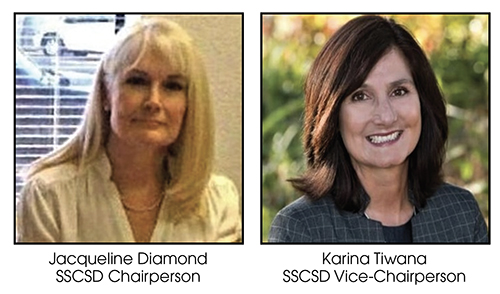 At a recent special meeting of the San Simeon Community Services District (SSCSD), the Directors unanimously elected the two newest Board members, Jacqueline Diamond and Karina Tiwana, to serve as board chairperson and vice-chairperson, respectively.  Daniel de la Rosa, Michael Donahue, and Gwen Kellas will contine in their terms as board directors.

Chairperson Diamond served for over ten years supervising special education programs in the Madera Unified School District prior to forming JMD Special Education Consulting in 2017.  She completed an undergraduate degree in business administration and accounting, as well as a Master of Arts degree in special education and teaching, at the California State University, Fresno.

From 2000, Vice-chairperson Tiwana worked at Alcatel-Lucent first as a contract manager, then as a corporate counsel, and beginning in 2014 as general counsel, vice president and corporate secretary.  In 2020, she was honored as “Legal Affairs and General Counsel of the Year” by Lawyer Monthly.  She earned her Juris Doctor degree at the Lincoln Law School of San Jose.

The SSCSD is searching for two volunteers to serve on the Budget/Finances Standing Committee and three volunteers to serve on the Water/Facility Standing Committee.  According to the Policies and Procedures of the SSCSD, the former committee is concerned with the financial management of the District, including the preparation of an annual budget and major expenditures.  The latter committee is concerned with the formulation of plans for arranging, realizing and/or achieving the District’s goals in regard to alternative water sources and facility maintenance and upgrades.

Consistent with the SSCSD Policies and Procedures, Chairperson Diamond will appoint three to five members of the public, as well as one or two board members, to serve on the two standing committees subject to Board approval.  Committee members for 2023 will be announced at the next regular SSCSD Board meeting.  The document that contains the Policies and Procedures of the SSCSD can be viewed at:  tinyurl.com/2p8h6zju.