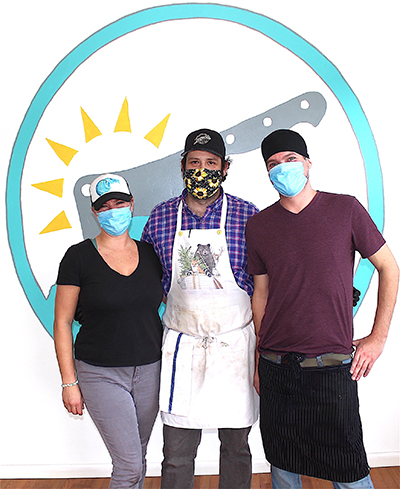 The owners of the new Morro Bay Butcher & Deli, located at the corner of Harbor and Main Streets in Morro Bay are from left: Jillian Montgomery, Geoff Montgomery and Evan Martz.

The newest business in Downtown Morro Bay is a throwback to the days when every little town had a butcher shop and is a way for the three owners to integrate into their adopted home.

Jillian and Geoff Montgomery and partner Evan Martz — each in their mid-30s — opened the Morro Bay Butcher & Deli Store, at the corner of Main and Harbor Streets, on Dec. 22 filling in the former home of TKD Surf Shop, a clothing store that closed suddenly some years ago.

The Montgomerys and Martz moved to the Central Coast 3-years ago from Jackson, Wyo., a small, tourist town not much bigger than Morro Bay and similar in many ways, explains Geoff, talking over his shoulder as he cuts a huge hunk of beef, a facemask muffling his words.

The trio had a booth at the Saturday Downtown Farmer’s Market starting last August, and were regular sellers until the new shop was ready to open.

Geoff says in Wyoming he used to manage three, small markets, all with butcher shops inside. “We got spoiled by good meat,” he laughs.

Some 2-years ago, he adds, he started working at the Arroyo Grande Meat Co., which piqued his interest in a shop of his own.
They started looking for a location to open, Jillian says, and when the Morro Bay location came available, they jumped on it. They’ve put a lot of work into the place, including beautiful wood floors, meat cases and a full commercial kitchen.
Geoff says they looked around the area for a place with good meats and while Spencer’s and Albertson’s Markets have butcher shops, they don’t have that special, one-on-one relationship like old-time butchers had with their customers. “There’s no personal interaction,” he says.

He says in his experience, customers like that personal relationship, they like to ask questions about the different cuts, about marinades and seasonings, and perhaps most importantly, they want tips on how to cook different cuts of meat.
He notes that the location, while not having a parking lot, gets a lot of foot traffic and with Martz (the cook) making deli sandwiches for takeout, they’ve gotten good response so far. They don’t plan to put any tables inside the shop, as Geoff says there are much better views down on the Embarcadero and at the beach to enjoy while eating lunch.

‘We’re an Old World butcher shop,” Geoff says, “with a modern twist. There’s no sawdust on the floor, which would be kind of cool, but hard to keep clean.”

Adding the full kitchen will allow them to reduce wastes. Jillian says their goal is to have zero waste of the meats, so when they put cuts out that don’t sell right away, they’ll cook them up for the deli. “We give food a second life,” she says, “the kitchen is key to that.”

Geoff says he didn’t go to college and study food science, but learned the old-fashioned way — on the job. “I worked for small markets that each had really good butcher counters,” he says. As he was the manager, he gravitated towards that.
One of their business goals, Geoff says, is public education, teaching their customers about the meats, the various cuts, and ways to cook it so it isn’t tough, or as he puts it “chewy.”

“Chewy is not necessarily a bad thing,” he explains. For example many people think a sirloin steak is tough but a sirloin “is more flavorful than a filet.”

Their ultimate goal is to buy direct from local ranchers, who he says want a way to get their local livestock into local restaurants and more directly to the local consumers. So they plan to increase purchases from local ranchers and producers, and are looking for a nearby slaughterhouse to start the process of turning a 4-legged, 1,000-pound steer into Sunday dinner.

“We want to be 80 percent local products — beef, pork and chicken — by the end of the year,” Geoff says. They will also eventually have a display case of locally sourced spices, marinades and rubs, as well as local olive oils and sausages for sale. And they will change their meat offerings as they get to know their customers better.

“We don’t want to carry what looks nice if people don’t want it,” Geoff says. And people from different areas favor different meats, for example, at the Arroyo Grande shop, they didn’t sell sirloin, he says, but in Morro Bay, they sold a case of it in the 6 days since they’ve been open.

Jillian, who is originally from Wisconsin, understandably is interested in locally produced cheese and there are a lot of small local dairies and cheese makers they want to work with.

“There is a lot of agriculture here,” she says, “but how do you get your hands on it?”
Geoff says the beef produced locally is sold to big packinghouses, mixed in with beef from across the U.S. and sent out to markets. “Our mission,” he says, “is to give farmers in this area a showcase for what they do, and they do it well in my opinion.”
“Meat,” he adds, “is a lot like wine. It picks up the flavors of the area it is raised in, if done properly.”
He likes the beef producers that take special care when finishing off the plumping up of their livestock, forgoing things like yellow corn as the cattle near harvest time.

They’re really happy with the warm reception they say they’ve gotten since opening in December and look forward to integrating more into the fabric of their adopted home.

“This is where we’ve decided to live,” Jillian says. “We want to be part of the community.”