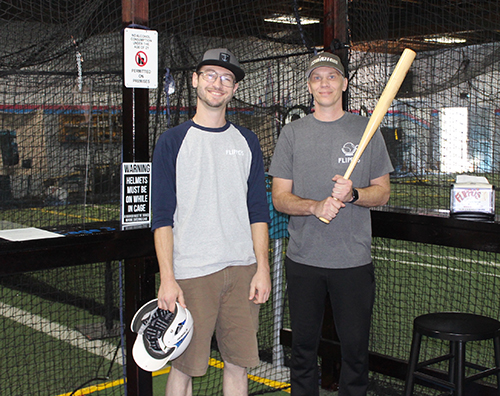 Kristopher East (LEFT) and Von Odermatt are two of the operators at Flippo’s Sports Arcade on Atascadero Road in Morro Bay.

Baseball and softball players, and sports fans now have a place of their own, after the recent opening of “Flippo’s Sports Arcade” on Morro Bay’s Atascadero Road.

Kristopher East and Von Odermatt, two of the new businesses’ operators, told Estero Bay News that their hope with the new Flippo’s was to provide a place for family-friendly activities, something the location was famous for as a roller skating rink, Flippo’s Skate Harbor, for generations.

The building is owned by Larry Guesno, who also owns the Morro Strand RV Parks adjacent to and across the street from Flippo’s. Guesno bought the properties from the former owner, the late-George Salwassar, who had filled the enormous building with a tremendous cache of antiques and rare items. All that was auctioned off as part of one of the largest bankruptcy cases in California history and included Flippo’s and the RV parks.

Odermatt explained that Guesno and East’s father, Kelly, spent the better part of three years remodeling the interior, transforming it from a lobby and a huge empty room with a hardwood floor for skating, into a café, a pool room, and batting cages for both baseball and fast pitch softball, taking up the former skating rink.

The batting cage room also has picnic tables and a number of giant TVs on the wall, each playing a different sporting event.
“They [Kelly East and Guesno] did most of the work themselves,” said Kristopher East. “We helped a little.”

Kristopher East, who said his family hails from the Lemoore/Hanford area, said they now live on site, in a residence attached to Flippo’s. That’s where the former owners Don and Mary Jane Puett lived for many years, raising a family and running the last skating rink in SLO County, before it closed in the late 1990s, much to the dismay of its numerous regular skaters.

That started an odyssey of the property changing hands, with the City of Morro Bay first buying the site for a teen center, only to turn around and sell it to Salwassar in 2006 in favor of buying out of bankruptcy, a former putt-putt golf business across the street and turning it into a teen center that it still runs today.

Odermatt said he grew up in Cayucos and Kristopher East said he came to SLO County 10-years ago to attend college, and returned to work on the remodel. His dad Kelly has lived here for many years, he explained.

Odermatt, who said he worked on the dinky golf facility when it was first built and opened as “The World’s Most Difficult Miniature Golf Course,” said he became involved in the new Flippo’s after he moved back to the area and into a home next door to Guesno.

When he was told about plans to remake Flippo’s, he said, “I was like ‘I want a piece of that.’” He is a retired marketing executive, Odermatt said. “I’m the numbers man and Larry is the idea man.”

Though they completed the project nearly 2-months ago, they’ve been undergoing a “soft opening” using social media to spread the word about the new business via word of mouth. And with over 1,000 followers already, he said it’s worked well. “People want to come in to check it out,” Odermatt said.

East said the project includes a solar energy array on the roof to make it more eco-friendly. “This is a karma project,” he said, noting that the goal is to become members of the community and to give back to it, too.

The final design and offerings are the result of a number of iterations the idea for repurposing the building went through. One idea was to turn it into a classic car club, with stalls for working on cars with glass walls in a working museum of sorts. It would have had events like car-themed weddings and receptions.

Then they thought about putting in bumper cars, Odermatt said. In the end the batting cages with a café, which is run by Kelly East, won out. It’s a niche they think the community will like a lot.

“It’s the only place in town where you can lock your kid in a cage and go have a beer,” Odermatt said with a laugh.
East said they are looking at adding a HitTrax system, a computerized batting simulator that uses high-speed cameras to determine batted ball speeds and calculate how far a hit ball might fly in places like Dodger Stadium.

“That’s what the teams want,” East said. They are looking at putting in a mini bowling system too.
Meanwhile, with the pool tables they are looking into doing leagues and possibly tournaments. “We’re always looking for new ideas and groups that want to utilize our space.”

As for the café, they are the only place on the North Coast serving Doc Bernstein’s Ice Cream, Odermatt said, and East said they have dabbled in smoking tri-tips too. They change the menu regularly and will be offering gourmet sandwiches at $7.50 that are “handmade with love.” They have a kid’s menu and just got a beer and wine license. “We want to make sure people leave here happy.”

They will have several local brews on tap including Firestone and Liquid Gravity.
Another special feature is 805 bats, which Odermatt said are hand-turned by a local craftsman out of maple wood.
For a couple of extra dollars, Odermatt said, kids can try one of the 805 bats and if they like it, they can order one specially made.
The batting cages have five, hardball pitching machines and one hurling softballs. The pitches range from 35-70 mph, which is a pretty good fastball for a Little Leaguer.

Having batting cages available will also help save the arms of coaches, who normally would be chucking batting practice to their teams (the pitching machines no doubt throw a lot more strikes, too).

Flippo’s Sports Arcade is located at 220 Atascadero Rd. Hours are Sundays-Thursdays, 7 a.m. to 6 p.m. and Fridays-Saturdays from 7-8. Admission is free and Odermatt and East said if someone just wants to come down, grab some food and a brew, and watch a game on the big screen TVs, they’re OK with that too, as their lobby is a “community space.”

“Our best customer is a 6-year-old who tells his friends and they all come in,” said Odermatt.
They’ve had baseball teams in for batting practice, and have hosted a birthday party for an 11-year old. Already over half their customers are repeat customers.