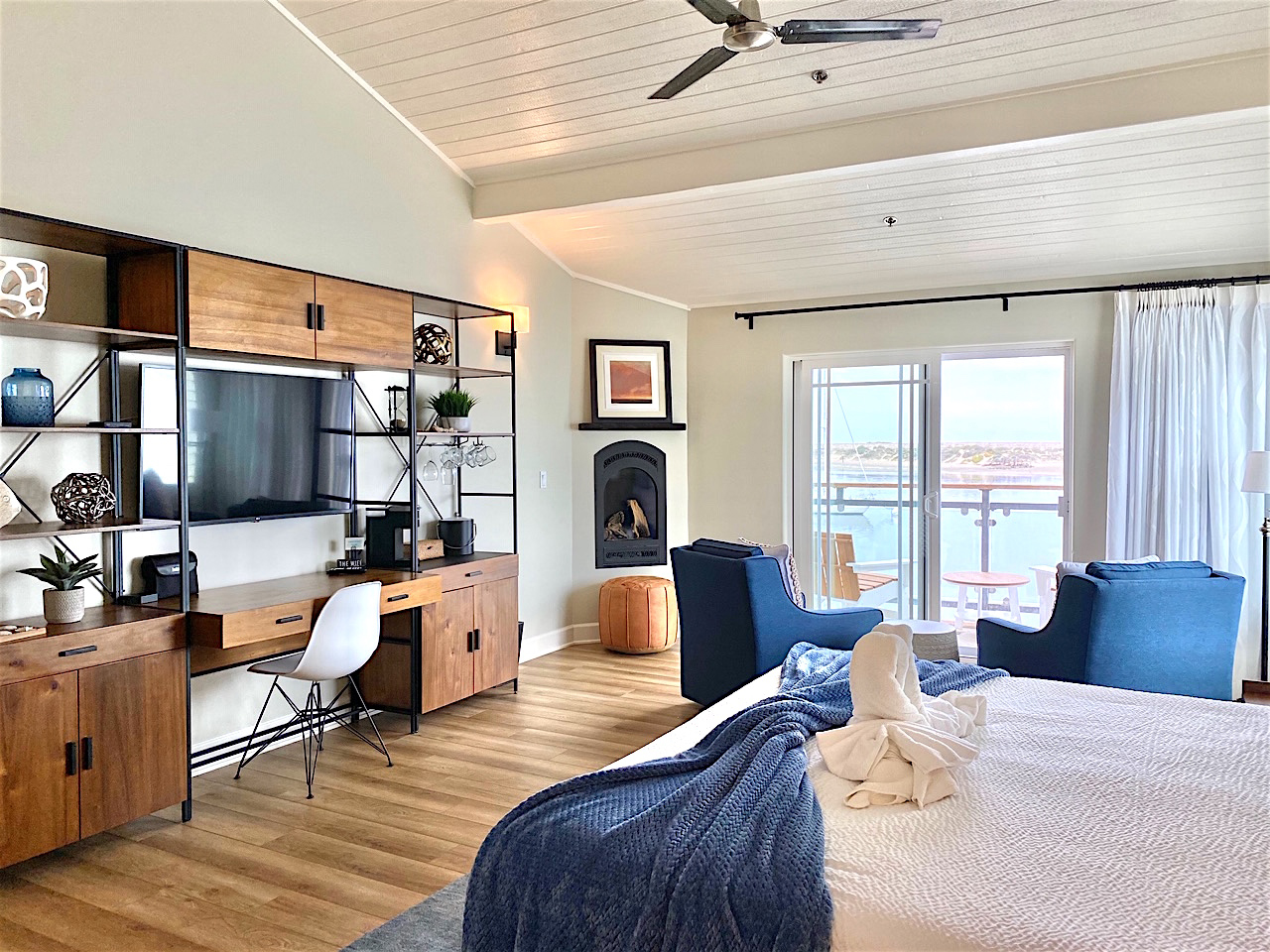 A Temecula couple who first invested in the Morro Bay waterfront in 2019, and then opened a boat-bike rental business last year, has now gone all-in a third time purchasing their second boutique motel on the Embarcadero.

Chris and Cyndi Kostecka on Feb. 23, closed escrow on the Anderson Inn purchasing the 8-room boutique hotel and the master lease for the City-owned property that includes two tenants — the Galley Seafood Grill & Bar and By the Bay Art Gallery.

The couple also has Estero Inn and Estero Adventures, which rents electric boats, kayaks and fat-tire beach bikes (510 Embarcadero), down on the south end of the waterfront. They got the Estero Inn in 2019 and opened the rental business just last year.

They had three chances to buy the Anderson Inn, Chris said. They were approached over a year ago by the Andersons, who built the Inn in 2005 but had the lease site for some 50 years, about buying it.

Chris said they were still too new to the hotel business and had to turn them down. The Kostecksas were real estate professionals in Temecula when they bought the Estero Inn and felt they didn’t know the motel business well enough to run two.

The Andersons had a couple of potential sales fall through with one even reaching the point where the City approved reassigning the lease to a San Diego motelier at one point, but that deal fell through.

COVID and the restrictions placed on the lodging industry by the Governor had a lot to do with it. That’s also why Chris said they turned down a second chance to buy it. And then it came up again, and as they say — third time’s a charm.

Cyndi said they bought the Estero Inn, “honestly, not knowing anything.”

But they’re smart business people and have picked up the motel business enough to think they could handle another property. The Estero and Anderson Inns are two of the newer, and nicer lodging properties on the Embarcadero, which helped with their decision.

“We got two of the most modern properties,” Chris said. He praised the people who designed and built them both — Ken Scott and Chuck Eras.
He called them “nice” properties and in exceptional shape structurally, especially given that they are both on the waterside of the street.

Of note, the sale marks the exit from the Embarcadero for the Anderson Family, which has been a presence on the waterfront since the 1960s when their late parents, Bud and Rita, opened The Galley Restaurant, a family operation that all three kids — Rodger, Molly and Jeff — worked.

Asked if they were going to change the name, Cyndi said, “We’ll keep the name. They worked hard and were here forever. Our goat is to maintain their legacy through this property.”

Both of their subleases — The Galley and By the Bay — will stay open too.

Since taking over, the Kosteckas have been busy giving the rooms a freshening up with new flooring, beds, furniture and paint. They upgraded the beds to all king size. About the only things that remained were the showers and tubs, she said.

That wasn’t easy, as Chris explained, because the cost of everything — from the flooring to wood to the paint — has risen and the supply of a lot of things like fine furniture has dropped. It took some doing but they eventually got everything they needed for the remodel.

“They [the Andersons] built an incredible property,” Chris said. While they were remodeling, he said people were stopping by often to say hello.

“Everybody’s sad to see them go.”