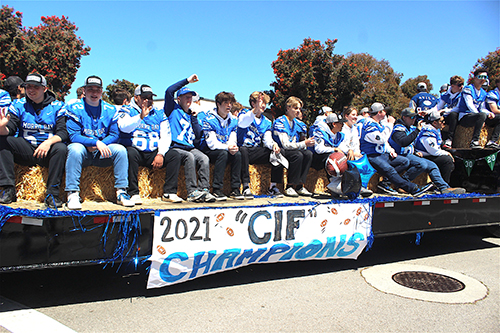 It wasn’t a “ticker-tape” parade per se, but the community turned out Sunday to celebrate Morro Bay High’s 2021 football championship season and hand out a little bling to go with it.

Members of the team, along with cheerleaders and coaches, paraded down the Embarcadero and up through Downtown Morro Bay to City Park where they held a ring ceremony celebrating the Pirates’ CIF Central Section Championship, the CIF Regional Championship, and a second place finish in the State Championship, coming up a little short of sports nirvana, but making history all the same.

Morro Bay hadn’t won a CIF Section title since the magical 1995 season, when the Pirates steamrolled over Templeton High. It was the first time a MBHS team had won a CIF Regional Title, said former head coach Jake Goosen-Brown, and the first time any high school from SLO County has played for a State Football Championship.

Team Captains Dylan Turner, Nicky Johnson, and Christian Merrill spoke on behalf of the players thanking the coaches, school staff, family, fans and friends for the outstanding support of the team the entire season.

Coach Goose, who has since left the school for a coaching and teaching position at Notre Dame High School in Southern Calif., also expressed sincere thanks to all people who supported the team in a myriad of ways, introducing each player and coach when they went up on stage to receive their championship rings.

The beautiful and impressive rings, were paid for by players’ parents and business sponsors.

Among the other special recognition handed out, the coach acknowledged Dylan “Burner” Turner for earning All League, All-CIF and Second Team All State honors (by CalHiSports.com), the first football player at MBHS to make All State, the coach said.

Also, Turner and Merrill signed National Letters of Intent to play football in College — Turner at Cal Lutheran and Merrill at Pacific University in Oregon.