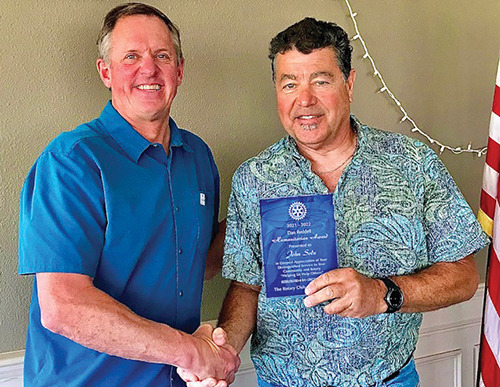 “I’m excited to lead our club as we continue to grow and give back more to our community,” said John. “This year we plan to increase our community service and bring more awareness to the service projects Rotary is doing throughout the world.”

President Solu is a naturalized American citizen whose family moved to the United States on the same day that Neil Armstrong walked on the moon 50 years ago.  He often says that watching the scene of man walking on the moon on the day he arrived in America made him believe that anything was possible in this country.

He and his family moved to Morro Bay in 1998 and purchased a small inn. His four sons graduated from Morro Bay High School.  Three of them are currently attending college pursuing degrees.

John fondly remembers how welcoming and kind people were to him and his family when they moved locally.  Other business owners and people from the neighborhood stopped in and introduce themselves, volunteers from the Morro Bay Chamber of Commerce called or came by and even the mayor paid them a visit.  That first week they went down to the Chamber and asked to become members and were asked to help with the upcoming 4th of July event at Tidelands Park.  That was the beginning of nearly 25 years of service in the Morro Bay community.

Solu has served as president of the Morro Bay Chamber of Commerce, Visit SLO County, and the Morro Bay Harbor Festival and volunteered for Del Mar Elementary PTA and the Morro Bay High School Athletic Boosters.  He was regional vice president, western states for the Hilton Hotel Corporation and a small business owner prior to retiring in 2018.

John follows Tim Olivas who led the club in innovative fundraisers like the Ducky Derby and giving back to our community by awarding Community Grants to local non-profits. The Club also awarded seven $2000 scholarships to graduating Morro Bay High School seniors.

The Rotary Club of Morro Bay is known for local charitable fundraisers such as Tri-Tip BBQs and Crab Feeds.  Reach out to the Club to become a new member and get involved in the community. Meetings are held aboard the Chablis dockside.  For more information call 805-441-3552, visit morrobayrotary.org