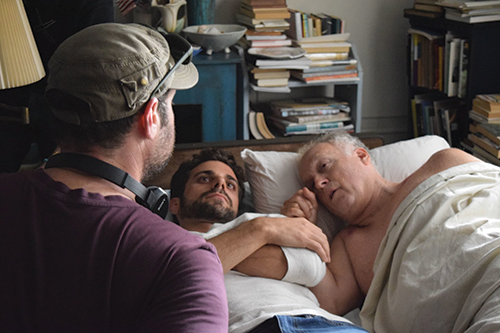 Image: Director Jon Levenson on the set of his short film, Someone Will Assist You Shortly

SummerFest, an activity of the Cambria Film Festival and the Cambria Center for the Arts (CCA), returns Saturday, Aug. 21. Offering more than a dozen feature and short films, the festival will offer all films live in a CCA theater space as well as through an on-line streaming platform.

SummerFest focuses on films made by locals or with a local connection or theme. This year’s programming includes both documentaries and a variety of serious and comic short films.

Some of the films include:

SummerFest also brings back live parties. On Friday night, Aug. 20 the Festival hosts a special meet-and-greet wine party with filmmakers and filmgoers. It takes place in the Courtyard of the Garden Shed in Cambria and features the wines of Cayucos Cellars.

VIP All Access Passes ($50) give purchasers access to all live screenings and the party, as well as the ability to stream films. Other ticketing options include a streaming only pass ($15) as well as individual tickets to specific screenings or the party. For more details or to purchase tickets, visit www.cambriafilmfestival.com.

Online films will be available for streaming beginning Friday evening, Aug. 20 and continue through Monday, August 23. Guests can watch at their convenience on their smartphone, tablets, personal computers or project to their televisions with common apps like Roku, AppleTV, and Chromecast.

The full traditional Cambria Film Festival returns February 3-6, 2022. Already, hundreds of films — all dealing with romance, romantic comedy and the complexities of love — have been submitted for the competition. As in the past, the festival plans to showcase approximately 50 to 60 shorts and ten or more feature films. This year, the festival will stream all films in a virtual festival, as well as return to hosting traditional live screenings and events.