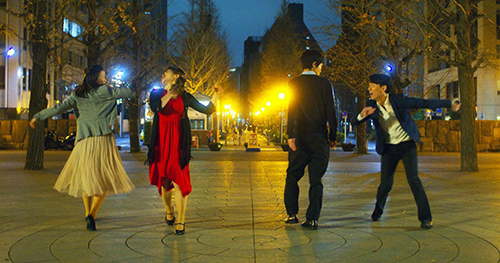 Tickets are now on sale for the 5th Annual Cambria Film Festival, February 3 thru the 6, and if you grab them now, you will benefit from early bird prices. This year’s festival features a hybrid format with regularly scheduled in-person screenings and events as well as a virtual festival.

“We’re excited about the hybrid option,” said Dennis Frahmann, chairman of the festival. “We tested it last summer and it works very well. The virtual screenings give audiences the option of seeing more films whenever they want, from wherever they want.”

The upcoming festival features films from more than 16 countries. “I think these are some of the strongest films we’ve had,” said Frahmann. A panel of judges has narrowed down the screenings to seven feature films and 47 shorts. They festival will also offer talks with some of the filmmakers and screen some local community short films as well.

The Cambria Film Festival stands out amongst other film festivals for its unique theme, “Share the Love.”  All the films submitted must center around stories of romance and the complexities of love.

“A broad topic to be sure and it is fascinating to see how each filmmaker approaches the subject,” said festival judge, Robert Tieman.

Tickets are selling quickly with an early bird price of $95 for an all-festival pass, which includes all screenings and in-person events, including the closing night gala. Or readers can purchase a virtual pass for unlimited screenings plus livestreamed Q&As with filmmakers, and the livestream of the closing night party for $50. Individual film passes are also available plus rush line tickets will be available for single screenings at the various venues.

Cambria Center for the Arts, 1350 Main St. in Cambria serves as the festival’s hub, but other venues will host various events, too. The festival kicks off with an opening night party at the Hearst Ranch Winery and wraps up with a closing night gala at the Cambria Vets Hall. That night, awards are handed out for Best Feature Film, Best Short, Best Animated Film, Audience Favorite Awards, and the Nancy Green Founder’s Award for Best of the Fest.

Anticipated highlights of the festival include a musical romance from Japan titled “Make-Believers,” a LGBT love story from Namibia titled “Kapana” and “They/Them/Us,” a kinky romantic comedy that won the 2021 Paris Independent Film Festival award.  Also, a wide variety of independent shorts on subjects as varied as a comedy about the desire to make a baby called “Collapse,” a love story featuring typewriters called “Tyndall Typewriters,” and a subway meet-cute with sign language called “Noisy.”

A complete schedule of films and events are on the website, CambriaFilmFestival.com.  Tickets are available on the site along with tips on planning your visit. Tieman adds “Many of the screenings sell out, so it’s good to purchase early and you can take advantage of the discounted prices until December 31.”