Tim Checks out From Ralphs 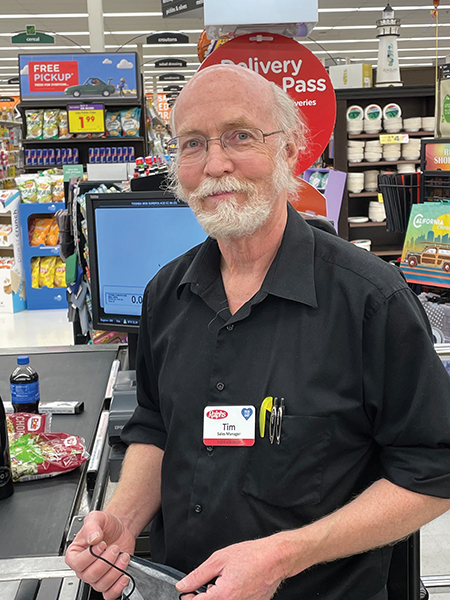 In 2015, Tim Staggers came to Ralphs hoping for a part time job that would get him out of the house, get him some exercise and maybe keep his brain stimulated. He will retire from the company this month.

“I would like to thank all of the great customers of Ralphs, who have made my 6 plus years of employment so enjoyable,” Tim said. “You all made working at Ralphs a joy. I cannot think of any other community that could have made it through the last two years so well and so supportive. This is one great place to live. Not just the climate but the people here are so special.

“It has turned into a love affair with my customers. I got the exercise that I needed but so much more with the wonderful stories and friendships that have been created over the years. You all will be missed.

Tim also got something else he didn’t expect while working at the grocery store. Two years ago, a beautiful woman came through his line and gave him her telephone number.

“I took her out two days later,” he said. “We have been together ever since. I had planned to stay at Ralphs for a few more years and then travel the world, but this wonderful person has convinced me that this is the time. My final day at Ralphs will be March 15 and on March 21, she and I will be flying into Lyon, France.

← Previous: Lessons from a Crab Takin' Car of Business →