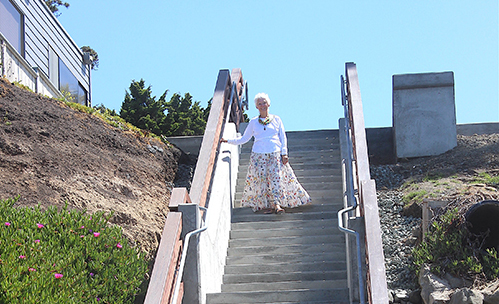 Work is wrapping up on the rebuilding of the 1st Street Beach Access in Cayucos, giving residents and visitors a new, much safer and rather stylish means of getting down the bluff to the beach.

Teddy Llovet is a Morro Bay resident who took an interest in the project because her friend, Steve Williams, owns one of the subcontractor companies. Llovet called Estero Bay News, admiring how the workers stayed on the job through the Coronavirus Pandemic, taking precautions to protect themselves, while finally putting the saga of the 1st Street access to bed.

Williams Concrete of Morro Bay did the concrete work including an impressive and solid stairway down to the beach, a small plaza-like overlook area at the top and a pathway from Pacific Street.

“Steve Williams Concrete Construction’s ‘essential workers’ were on the job for 6 months,” Llovet told EBN, noting the timing is good as the virus restrictions start being eased. “Folks can now enjoy this access as beaches open to the public.”

She noted that a wonderful, whale’s tail-shaped bench was donated by the Cayucos Business Improvement District. The plaza includes a compass imbedded in the concrete and there are two planting beds along the pathway that still need to be landscaped.

It’s been a long sage to get the stairs replace. The County closed the access point some 12-years ago, when the stairs were deemed to be unsafe. It coincided with the County Parks Department’s rebuilding of another access at 16th Street. The County fenced off the 1st Street access and it’s been closed all these years.

Shaun Cooper, a senior planner with County Parks, told EBN last August that they had finally identified money to rebuild the access from the Coastal Conservancy and Coastal Commission, which was the agency that called for the establishment of Cayucos’ numerous beach access points.

The County awarded the contract to Santa Maria’s Kinyon Const., on a “Job Order Contract,” used when the open bids came in far too high. Such contracts are awarded to companies that the County has pre-qualified for relatively small projects.

Funding for the project broke down as: $86,000 in grants from the California Coastal Conservancy; $72,300 from Coastal Commission mitigation monies; $25,000 from the Cayucos BID; $10,000 from Dist. 2 County Supervisor Bruce Gibson’s community project funds; $100,000 in County Parks reserve funds; and $2,800 in Quimby Act fees paid by developers in lieu of providing park space.

For the most part, beach access points are simply short paths across a bluff leading to a set of stairs that go down to the beach. Cayucos has some 24 of these beach access points all through the numbered streets from 1st Street to the end of Studio Drive. They are built at the ends of street right of ways, according to Cooper.

Getting money to pay for repairs or in the case of 1st Street a full replacement has proved difficult. “It’s a struggle for us to find money,” Cooper said. “Unfortunately, as time goes by, they deteriorate with the ocean environment.”

He added that the County was going to hire a consultant to conduct a “facilities condition assessment” to look at all County-owned facilities and making assessments on their condition. “That’ll help move these projects along,” Cooper said.