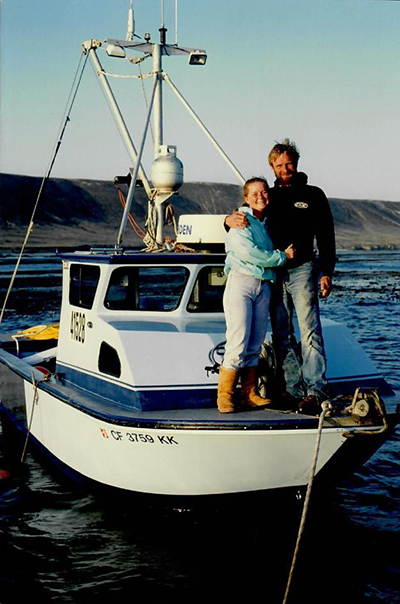 Jeremiah O’Brien and his wife of 28 years Trudy O’Brien.

“For a man of the sea, getting recognition for work done in the boardrooms and public meetings would seem a little out of place,” wrote then Bay News journalist, Neil Farrell, when Morro Bay commercial fisherman Captain Jeremiah O’Brien received the 2015 Highliner Award, as tribute from the National Fishing Magazine for his many years of advocacy for the fishing industry.

Among other accolades, he was also last year’s recipient of the Morro Bay Chamber of Commerce’s Living Treasure Award, but he is the first to say he just happened to be at the right place at the right time working with a team of the right men and women that got things done.

So how did our community get so lucky to have Captain O’Brien’s preferred port remain Morro Bay’s harbor? Look to Trudy O’Brien, the love of his life, teammate, and best friend. They celebrated his twenty-eighth wedding anniversary this month. This only a snapshot of their backstory, one that is storybook worthy.

Fishing was in Jeremiah’s DNA, but finding Morro Bay and Trudy was far from direct. Both his grandfather and great-grandfather were whalers in Newfoundland, but when his grandfather migrated to the United States, he worked for Westinghouse-Sturtevant in Boston as a tool & dye man.

“I’ve never seen it, but my grandfather’s invention is the Smithsonian,” said O’Brien. “It was his pump that contained the seepage so they could finish the Holland Tunnel in New York City.” His widowed grandmother became the sailor. “She cruised around the world several times, including on the Queen Mary.”

The drive to survive and succeed, O’Brien learned from his mother. “Mom was a tower of strength.”
Life changed one summer vacation when his dad was killed in a fluke car accident caused by another driver — his mother was seriously injured. “We kids (four brothers) were farmed out to various relatives for one-point-five years while Mom was mostly in the hospital. We saw her sporadically. A [former] teacher at Boston Clerical School before WWII, once out, she started a bookkeeping and typing business while still confined to a wheelchair. This business allowed her to eventually buy a home and unite our family. Her strength and determination for us was unparalleled.”

OBrien’s first career began in Boston building high-rises as a sheet metal worker. His passion for skiing drove him to years spent as a “ski bum.” He moved to Mt. Washington, New Hampshire. “It has the worst weather in the country with Guinness Book winds recorded at 238 knots.” For six years, he earned his lift tickets while working his way up to managing the dining room at a ski resort.
“Ski bums,” he admitted, “move around.” About 1977 friends discovered new thrills skiing higher mountains in California and lured him westward with promises of a job and housing. His first California adventure was in Bishop/Mammoth Lakes.

“Within six hours I was out of a job and a place to live,” Jeremiah recalled. “My friend was a bartender who loved to buy drinks for folks. He poured me a few, and then others, as hours passed. I noticed this sober guy quietly watching. When I asked my friend who he was, he said he was his boss.”

His friend was fired and O’Brien learned what it meant to be homeless for three months. Desperation or inspiration jump-started his next career. While tipping a few with his friend, Rick Contreras, he over-heard, ‘They never show up to get the job done.’ It was a hot market for condo-building. “I asked Rick if he’d installed sheet rock. He even had the tools so I stood up and introduced ourselves as Red Stone Drywall and said we’d show up, but didn’t scrap or haul rock away. Maybe we made twelve-cents per foot, but we had lots of work. The college kids would come to town, kick in the walls. We’d fix and had time to ski between jobs.”

His wanderlust took him to Tahoe. “I was living right on the lake at North Shore with a lady-friend and managing a restaurant. It was pretty cool.” Eventually O’Brien got tired of the life — the reciprocal gambling and drinking after work and skiing.
About 1980, a friend of his lady-friend was expanding her Aspen bar business to “a little town on California’s Central Coast.” The couple moved to Morro Bay to manage her newest acquisition, MooseJaws. Today’s locals know the property as the former Buoy Bar and current Dark Nector Coffee Saloon. She renamed it Brown’s.

“It was fondly called Bloody Brown’s for good reasons,” said O’Brien. “When they tore down the Cloisters Hotel, the owner had the dance floor moved over. It was an amazing Bird’s Eye Maple; cost her lots to refinish it. Everyday when the sun hit it, the shine would blind me so I couldn’t see who I was serving.” Besides breaking up a few-to-many fights, he admitted he and the owner “never saw eye-to-eye,” so he was out of work again.

Next he worked on a ranch on Little Morro Creek owned by Sophie Erden, then owner of the Hungry Fisherman. But more important he found his love for fishing while rooming with Randy Kann. “Fishing with Randy was instant love for the industry. You might say I was hooked.”

They also worked for Harold Davis, who built Radon boats. “Mike Radon built abalone dive boats famous throughout California and Oregon.”
In 1983 Kann and O’Brien built Morro Bay Harbor Department’s patrol boat. The department is currently fundraising to replace it. “We knew where it was going, so we built it exceptionally good for Harbor Master Jim Funk.” But he hopes all will donate to the fund to replace it.

Eventually he got his own boat often crewed with Trudy. They reconnected about 1985. “I was selling fish at Gold Nugget Seafood. Trudy worked there. We were invited to the owner’s wedding. She asked who I was taking to the wedding. It was like our first date. She lived on one side of Morro Bay and I the other. She kept leaving a things at my house, so I said either they go or you need to move in.”

Morro Bay is Captain O’Brien’s base, but he has fished every port on the west coast from San Diego to Illwaco, WA. He’ll name them for anyone who asks and does name them in order. “We’ve had a succession of the best harbor masters and staff in this department for so long. I’ve worked with all these harbor masters and Morro Bay’s are a cut above the rest.”

For ten years Captain O’Brien served as president of the Morro Bay Commercial Fisherman’s Organization (MBCFO). The group paid $390,000 to fund the dock’s mega ice machine project, but he wants the community to recognize it was Harbor Master Rick Algert, who doggedly worked to complete the million-plus project when it had to re-engineered for future earthquakes.
In 2010, Captain O’Brien joined a group to testify before Congress. “They were trying to kill the industry I love.”

His advocacy continues as a director for the group he helped to create, the Morro Bay Commercial Quota Fund (MBCQF). Today the group helps sustain Morro Bay’s fishing village economy showcasing a unique and vibrant working waterfront.
And although Captain O’Brien continues to fish albacore, salmon, and swordfish in other ports six months of every year, he continues to stay actively involved on Morro Bay’s Harbor Advisory Board and the Chamber of Commerce’s Governmental Affairs Committee. Captain Jeremiah and Trudy are also active members of MBCFO and founding members of the Morro Bay Maritime Museum (MBMM). MBCFO is currently working to document the fishing industry’s contributions for the museum’s latest exhibit.