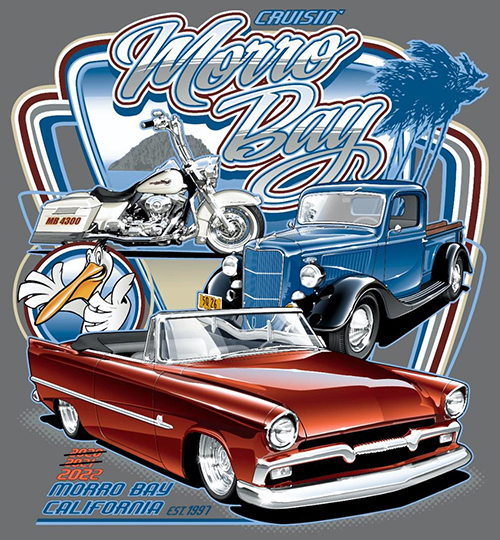 Deadlines! Time for me to escape and refresh. But life goes on in the Estero Bay. Back and better than ever in Morro Bay are the Cruisin’ Morro Bay Car Show on May 5-8 followed by the Morro Bay City-Wide Yard Sale, May 14-15. I hate to miss a deadline, so enjoy a look back to my “By the Bay” columns on the history and updates of these two events. I have a treasure trove of history for my readers!!

Ron McIntosh (who we lost in 2014) and Steve Carnes (now the chairman of the planning group) were good friends with several common interests. They live and own businesses in Morro Bay, wanted community businesses to thrive and both loved tinkering with classic cars. They’d also served on committees and advisory boards intent to solve Morro Bay’s various issues.

Since 1994 they had met weekly for coffee at Dorn’s Original Breakers and often brainstormed their favorite idea—bring lots of visitors who owned classic cars to Morro Bay and let them display for several days. Thus, the friends birthed the Cruisin’ Morro Bay Car Show in 1993 although it was 1997 before they put the first 125 cars on the streets.

McIntosh and Carnes were both Morro Bay Rotary and Chamber members. Morro Bay architect (and artist) Don Doubledee was the Rotary president. They knew he was looking for a new fundraiser. He and another friend, Dave Tope, a Chamber member, liked the idea and convinced their organizations a car show could work for the betterment of the community and the financial benefit of their organizations. The fledgling committee dubbed Doubledee chairman and added Ken Vesterfelt, Dan Dorris, and Chris Parker. Their hardest task was to convince the City of Morro Bay, especially the police department, it should close down significant streets for a weekend and allow the classics to parade loudly and consume all parking.

All proceeds would benefit those that volunteered to work the car show and the committee selected Morro Bay Rotary, the Chamber, and Police Explorers, as the beneficiaries of the annual event typically the first weekend each year in May. The anticipated 500 plus Cruisin’ Morro Bay Car Show participants showed up in 1997 and have returned each year.

By 2010 it was the 14th annual event. Merchants, restaurants, hotels and even residents realized it was a good time and benefited all concerned. By 2010 the event had grown to 4-days starting with registration and a welcome on Thursday at McIntosh’s Main Street Ocean View Garage. Participants would see old friends, nibble, imbibe, and show off what they might have done to their cars over the past year.

Friday was a planned cruise north for BYO-lunch somewhere along the Central Coast then back to their hotels to polish up for the big cruise night around and around and around Morro Bay’s downtown. Onlookers were families with babies and excited children of all ages. Seniors smiled at the memories of their first or favorite cars back when. Cruisin’ cars were encouraged to wave, shout, honk, and rev engines. Then early Saturday until Sunday noon the streets of Morro Bay were packed fender to fender for “show n’ shine” time—500+ spiffed up classic cars enjoying the questions and stories shared.

“Not much has changed over the years,” said Doubledee (in 2010).  “The goal has remained simple, bring the cars to town to enjoy our hospitality and spend their cash with our merchants, restaurants and hotels.”

In 2022 the goal remains the same. Steve Carnes is now chair. Committee members have changed but they still meet weekly all year round at Dorns to plan. This year will celebrate 2020-21 and 2022. Expect the classics to roll in Thursday, May 5, Cruise Nite is May 6, and Saturday and Sunday “show n’ shine.” Find out all the details at MorroBayCarshow.org.

And word has it — even in today’s economy their original plan still works for the benefit of all concerned.

In 2012 my modified “By the Bay” column was headlined “Morro Bay Treasure Hunt. It read, about eight years ago several community members brainstormed a citywide yard sale. Ray Ladd promoted other communities used the concept to attract visitors – avid treasure seekers who would visit, eat and shop.

Morro Bay Beautiful President, Ann Reisner, adopted the idea and launched what is today (2012) themed “Morro Bay Beautiful Annual City-Wide Yard Sale: Working with Our Chamber of Commerce.” It happened in early April with more than 172 households, nonprofits and businesses securing spots on the official map, sponsored and published by The Bay News (now Estero Bay News). Pacific Locksmith provided the maps and hosted coffee and donuts for the first 100.

Reisner said, “My daughter (Juliana Epperly) and I have been knee deep in getting the City-Wide Yard Sale completed. It is the biggest one we have ever had. I’m hoping for a Guinness World Record someday.”

Epperly, owner of Pampered Paws, saw her mother having so much fun with the yard sale, she wanted to help. “Since December I have spent 50% of my time on this,” but admitted they are still having fun.

Both ladies credit former Chamber CEO Craig Schmidt and his chamber staff for stepping up. In 2022 both ladies are still involved, but it is Visit Morro Bay that is coordinating the map. Call Liz at 805-225-7411.

Reisner said she loved exploring yard sales and finding treasures. “It is discovering things you’re not looking for. I love my $2 crockpot. My husband, Ron, bought Juliana an expensive shade umbrella for her dogs. The dogs immediately tore it up. I found a 10-foot, teakwood one with a cement base, probably cost $10 and she still uses it.”

Still the goal of the Morro Bay City-Wide Yard Sale is“Recycle, reduce landfill, and have fun!”