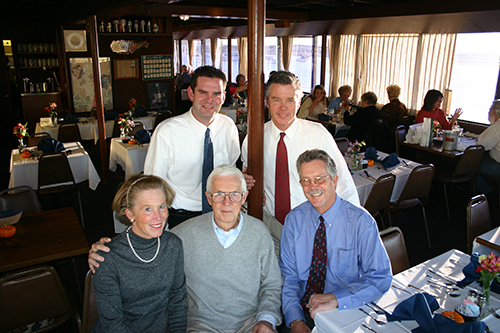 Three generations of Andersons posed in 2004 shortly before the closing of The Galley Restaurant and the rebuilding of their waterfront lease site. Pictured are back row: John [Rodger’s son] and Jeff Anderson. Front row: Mollie Mason, Bud and Rodger Anderson. Archived photo

Since 1966, there’s been a business on the Morro Bay waterfront owned by the Anderson Family; but no more.

In April, Bud and Rita Anderson’s Family sold the master lease at 897 Embarcadero, the Anderson Inn, an 8-room boutique hotel with tenants By The Bay art gallery and The Galley Grill & Bar downstairs to Chris and Cyndi Kostecka, who also have the Estero Inn a few blocks south on the Embarcadero.

Bud, who died in 2018 and Rita, who died last year, raised their three kids — Rodger, Mollie (Mason), and Jeff — in and around The Galley Restaurant, which Bud purchased back in 1966 when it was little more than a shack that dated back to the 1940s.

Jeff and Mollie sat down with Estero Bay News to recount their decades on the Waterfront. Rodger was vacationing at the family’s home in Hawaii.
Bud Anderson built what became The Galley Restaurant, turning it into a local favorite that served generations of loyal customers and hired and trained countless local young people, earning a loyalty amongst its employees, some of whom worked there for decades.

In 2004, with a deteriorating, tired building, they embarked on what should have been a simple tear-down-rebuild project that dragged on for several years as it wound its way through the approval process.

And for the first time, the Andersons would be returning to the lodging industry, which brought them to SLO County. Their father’s grandfather, Jefferson Lee Anderson, built the Anderson Hotel, which still stands tall on Monterey Street in Downtown San Luis Obispo. That hotel played a large part in why the family ended up here.

Their dad, Bud, was born in 1925 in San Luis Obispo, explained Mollie. His father died when he was 2-years old, she added, and Bud, his brother Jim, and mother all moved to Piedmont, Calif.

There, while in grammar school, Bud met Rita Blohm his future wife, and they followed each other through high school and then to U.C. Berkeley.
Shortly after they married, their grandfather said he needed them in San Luis Obispo to run the hotel, and the brothers — both newlyweds — packed up and moved south.

Eventually, Bud got out but had a non-competition clause in the sale agreement, so he bought the Osos Liquor Store on Osos Street, Jeff said, and in 1966, he bought The Galley from Bill and Florence Wilson.

The kids went out to Morro Bay every single day to work. Mollie said she and Jeff ran the fish market. “We were 12 and 14,” she said. Rodger is oldest, Mollie’s the middle child and Jeff is the youngest. Only Rodger has children, and his son, John Anderson is a partner in the new Galley, majority owned by David Peter, who worked at The Galley bussing tables at 14.

Each Anderson child went away to college, and Mollie played on the LPGA Tour for 5 years. But they all returned and when the original restaurant closed for good all three were working there.

Rodger has also distinguished himself serving a term on the City Council in the early 1980s and returning in the 1990s to the Council and three terms as mayor. He also served on the Harbor Advisory Board from 2004-07, and was vice chairman for a few of those years.

In 2007, the Chamber of Commerce honored Bud and Rita as Morro Bay “Living Treasures” with all five family members posing on stage with the honor.

They’ve all also worked off and on at the family’s other restaurant, The Kona Galley in Hawaii. Over the years, some of their young employees working in the Morro Bay restaurant got to go to Hawaii and work for a summer, recalled Jeff.

But by the early 2000s, the writing was on the wall as to the future of their business. Jeff said they’d all been stewing over the condition of the building, which was, well, tired.

“Rodger and dad were on their way to Portland,” Jeff said, “and Rodger got the idea to turn it into a motel.” The three kids would form a partnership and rebuild the lease site. They’d already built The Anderson Building in the mid-1990s, which sits across the street from the Inn. It was designed to look like a lighthouse and they sold it too a few years ago.

(Bud Anderson once told this reporter that he’d spoken with the former owners of Gray’s Inn about their small, boutique motel and was confident they could keep their rooms filled and if they did, it would be a success.)

There were some concerns over the whole remodel idea. Mollie said she’s always been fearful of the Coastal Commission and what it can do to well-laid plans.

They hired local architect Steve Puglisi to design the project and closed at the end of 2004, expecting to be under construction by March.
They ran into Commission trouble early but Jeff said Rodger, ever the diplomat, knew what to do.

“We wanted to build clear out to the edge of the lease site,” Jeff explained. Each City-controlled lease site has both a land and water area. Many have built small boat docks and for over 20 years, the City has insisted on installing the Harbor Walk, a pedestrian pathway that traverses along the west side of the buildings at the water’s edge.

“The Coastal Commission said we couldn’t build over the water,” said Jeff. The old building cantilevered over the water, so why not the new one?
Rodger, he said, told them they would just do a remodel. That bluff apparently did the trick. “Rodger got them to keep us out over the water,” Jeff said.

“It took over 2 years, closer to three, but it could have been another 2 months or years. Rodger was able to communicate with the Coastal Commission because he knew who to talk to.”

But, as with most dealings with the Coastal Commission, there was a trade off.

Mollie said the Commission demanded they leave a breezeway along the north side of the lease site open for a view corridor. “We lost a lot of space,” she said.

But the last laugh was perhaps theirs, as with the COVID-19 restrictions on indoor dining, the breezeway made a convenient place to put up tables, allowing the Galley to remain open.

David Peter, their former busboy who’d gone on to do very well in the software industry, was looking at buying the Coffee Pot Restaurant, Jeff said. His dad told him to tell David not to buy that restaurant, because they would build a new restaurant for him. “He was right once again,” Jeff said of dad’s advice.

Their other tenant, By the Bay Gallery, owned by Ray and Becky Knox, moved over from the Anderson Building across the street, and was another good decision. “We handed the keys to the front of the building to them,” Jeff said. “It’s been wonderful to have them there.”

But this generation of Andersons didn’t know much about the hotel business. They did know, Mollie said, that with so few rooms they had to charge more for them, “but we only had eight to fill.”

“I wanted it to be like a guest room in your home,” she added.

Jeff explained that wealthy people want upscale places where they can sort of separate themselves. “The Southern California traffic was very good to us,” he said. They also discovered something called an “American Express Black Card,” the holders of which are very wealthy.

“To get a Black Card,” Jeff said, “you have to spend over a half million dollars a year on that card, so you’re entitled to special services.”

He recalled that one day he was helping out in the Galley and a famous rock star came in. “He had one of those cards,” Jeff said, declining to name the person.

And they were contacted by Scott Gun Travel of London, England who was looking for high end places to send his wealthy clients. “We took care of the black card holders from London,” Jeff said. “There is room for this in Morro Bay.”

Harbor Director Eric Endersby, asked to comment on losing one of his best tenants, said, “When the Andersons were courting a couple different buyers over the past year, I jokingly told Mollie they better pick a good one because the Anderson file is the thinnest file we have, meaning we have not accumulated any amount of complaints, enforcement letters or other issues.”

He added, “They have been delightful tenants over the decades, diligent, professional owners and business folks and wonderful community members. We will miss them dearly on the waterfront. Theirs was one of the top-grossing sites on the Embarcadero under their watch. So, yeah, in short a ‘thin file’ means you have been a trouble-free and issue-free tenant.”

Asked about the future, Jeff said he’s building a chicken coop in his yard and was expecting a delivery of a dozen chickens soon. His wife, Shelly, who is a world-class stunt skydiver and a flying-suit or wingsuits pilot, is retiring from that activity, much to his relief, so they’ll have more time together.
Mollie said, “We’re all going to stay here, we love this town.”

Jeff added “We have always wanted everybody to do well in Morro Bay. Everybody has been really good to us. We want to thank the City of Morro Bay and the Harbor Department for making our life on the waterfront pleasant.”

Mollie reflected, “It’s kind of the end of an era to not have the Andersons on the waterfront.”