Arrests Made in Kristin Smart Murder 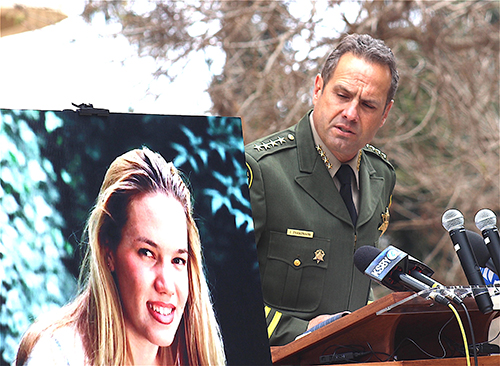 County Sheriff Ian Parkinson looks down at an enlarged photo of Cal Poly co-ed, Kristin Smart, who disappeared from campus in May 1996 during an April 13 news conference. Photo by Neil Farrell

It’s been a quarter century since Cal Poly co-ed, Kristin Smart vanished, but the County Sheriff’s Office last week finally arrested the only suspect in the case, and charged him with her murder.

On April 13 County Sheriff Ian Parkinson held a news briefing outside Cal Poly’s Orfalea Business School. The Sheriff said it was fitting to make the announcement at Cal Poly where it all started so long ago.
“This is a day many hoped for, many wished for and prayed for,” Sheriff Parkinson told the crowd of news reporters from both local and national outlets.

There were also about 100 current Poly students on hand to hear the news about a case that happened before they were born but one that all were probably aware of.

The Sheriff announced that they had arrested Paul Flores, 44, that morning at his home in San Pedro on suspicion that he murdered Smart. At the same time they arrested his father, Ruben Flores, 80, at his home in Arroyo Grande for suspicion of accessory to murder.
The younger Flores was driven to SLO County that morning and booked at County Jail and is being held without bail. His father’s bail was set at $250,000, the Sheriff said.

The Sheriff described Paul Flores as originally a “person of interest” in the case, then for years he was referred to as the “only suspect,” and finally just a few months ago, he was called the “prime suspect” in her disappearance.
And now that charges have been filed, any hope of Smart’s somehow still being alive appear dashed with the murder charge. Smart’s body has yet to be found.

Sheriff Parkinson, who was with the San Luis Obispo Police Department when Smart disappeared on May 26, 1996, rededicated the Sheriff’s Department to solving it after he was elected in 2011.
The Sheriff’s Department was brought in by Cal Poly Police fairly early in the investigation, after they were notified that Smart was missing on May 28, 1996, two days after she was last seen in Paul Flores’ company.

The case dragged on but was never completely out of the public eye, as her memory was kept alive through annual commemorations on her birthdays; and the establishment of a pocket park in her memory in Pismo Beach overlooking the ocean.
The case has been kept in the public eye by billboards along Hwy 101; by the Smart Family, who live in Stockton, keeping her memory alive with frequent news interviews; and their efforts to bring justice to their daughter, who was just 19 when she disappeared.

A wrongful death lawsuit the Smart Family filed years ago, has been on hold as the criminal case was investigated.
A lawyer in Arroyo Grande has for many years had a large sign seeking information about the case in front of his office in the Village, and most recently, an 8-part podcast, “Your Own Backyard,” produced by Chris Lambert refocused attention on the case and Flores’ involvement.
Sheriff Parkinson credited Lambert’s podcast with assisting the investigation and leading them to two witnesses who had never been interviewed before.
The beginning of the unraveling of this case started several years ago when the Sheriff’s Department along with the FBI conducted a search of the hillside behind the dorms at Cal Poly, near the famous “P” on the hill.

That search resulted in over 37 items of evidence being submitted for DNA testing; the results of which have never been divulged publicly.
Sheriff Parkinson said since he took office in January 2011, they’ve served 41 search warrants; conducted “physical evidence searches” at 16 separate locations; conducted a complete review of every item of physical evidence in the case and from all agencies involved.
They submitted 37 evidence items from the early days of the investigation for modern DNA testing. They’ve recovered 193 new items of evidence and conducted 137 person-to-person interviews, and written 513 “supplemental reports” in the case.

He said the case file has over 3 terabytes of information.
“My hope,” Sheriff Parkinson said, “is that we’re able to take this first step towards justice for the Smart Family.”
He added that the arrests were, “A bit of a relief but until we find Kristin this is not over.”

At the press conference, the Sheriff’s office displayed a large photo of Paul Flores shows him in a T-shirt, pajama pants and house slippers, hands in handcuffs being led away by Lo Angeles County Sheriff’s deputies. The Floreses were to be arraigned last Thursday, though if Ruben Flores makes bail, his appearance could be delayed.

The SLO Sheriff’s Department has now turned the case over to the District Attorney for prosecution. D.A. Dan Dow said in a news release, “These charges mark a major milestone. Today, we make the first move toward bringing justice to Kristin, her family, and the people of San Luis Obispo County.”

In his news release, Dow laid out the basic theory of the crime. “Paul Flores has been charged with first degree murder. It is alleged he caused Kristin’s death while in the commission of or attempt to commit rape. Ruben Flores is charged with accessory after the fact to the crime of murder. The allegation is that Ruben helped conceal Kristin’s body after she was murdered.”

That scenario varies little from the theory of the crime that emerged shortly after Smart disappeared.
The Sheriff revealed that they have had Paul Flores under electronic surveillance — email, texts and cell phone calls — since 2019. Last February, they simultaneously served search warrants at Paul Flores’ home in San Pedro, as well as his mother’s and his father’s Arroyo Grande homes and that of his sister.
I

n April 2020 they served search warrants at Paul Flores’ home and “recovered evidence related to the murder of Kristin Smart.”
And just last month more search warrants were served with Sheriff’s investigators using cadaver dogs and ground penetrating radar, even cutting up a concrete slab at Ruben Flores’ home. Still, they have not found her remains, but the Sheriff said they will continue to look for her.
The Sheriff said that forensic physical evidence was located at two of the homes they’ve searched that were “linked to Kristin Smart.” Asked whether he thought the mother, Susan Flores, was involved, he said, “It’s not what you believe, it’s what you can prove.”

As for the podcast, Sheriff Parkinson said Lambert had taken a local story and expanded it nationwide and internationally too. “Once it came out,” he said, “we started getting new information.” He said the podcast “produced information that was valuable.”
He said Denise Smart, Kristin’s mother has described the case as “a puzzle” with missing pieces. “This has been a puzzle,” he said, “and it’s been a very slow process to discover those pieces.”

D.A. Dow asked for the public’s help in further investigating Paul Flores.
“We are also seeking the public’s assistance in providing any information about this case or information on other potential crimes believed to have been perpetrated by Paul Ruben Flores, including assault or other acts,” he said. “Flores was known to frequent bars in the San Pedro area from 2005 to present.”

Individuals with any information are encouraged to contact Crime Stoppers at (805) 549-7867 or online at: www.slotips.org.