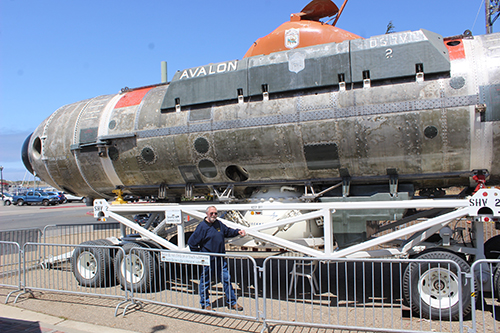 The Morro Bay Maritime Museum recently hosted one of just a handful of men ever to command the museum’s showcase exhibit — the Deep Submergence Rescue Vehicle Avalon — in the latest installment of a new outdoor speakers series.

Cmdr. Richard H. “Dick” Taylor (U.S. Navy-Ret.) was one of three commanders of the Avalon, and was also qualified to command a deep sea bathysphere, one of just two Navy men so qualified.

His career started in 1959 when he enlisted in the Navy right out of high school, Taylor explained to the audience of about 40 museum volunteers and supporters. He went in figuring to get out after one hitch and go to college, but, “34 years later, I got out and then went to college,” Taylor, 80, said.

In 1964, he said, he was a First Class Petty Officer and got assigned to the submariner program.

He was the 25th of the Navy’s pilots of deep-submergence craft and in 1972 became the third commander of Avalon. But there was a lot of service in between. Taylor said he got assigned to submarine surveillance stations and served in places like Big Sur, the Channel Islands and Washington State, a program that got decommissioned.

After 20 years in the Navy he was reassigned to a surface ship and told his commander he wanted to go overseas. “’I’ll send you to Turkey,’ he said to me. And I said, ‘Where’s Turkey?’”

He got sent to the Defense Language Institute in Montana to learn the language and it was “the hardest thing I’ve ever done in my life,” he laughed. There were 30 in the class, “All young guys from the Air Force, the Army. They were bright as hell.”

He eventually became the U.S. National Representative to the Commander and Chief of the Turkish Navy.

He said it was appropriate his speaking event was on Memorial Day Weekend, as the Avalon and the DSRV program was born in response to the Thresher Tragedy of 1963. Thresher was one of the finest attack submarines in the world at the time, Taylor said. She was undergoing sea trials and had 112 sailors and 17 civilians onboard when she went down. “The end of the story,” Taylor said, “is it flooded and sank in 8,000 feet of water.”

It brought to light that the Navy had no capability to respond to submarines that sink.

In bathyspheres they dove down to the Thresher’s wreckage to determine what happened. But there was no way to rescue anyone.

The Navy in 1964 formed the Deep Sea Submergence Project (DSSP), Taylor said, and began designing and building a rescue submarine. “There were originally supposed to be 12 built,” Taylor said. But the cost to build the first two was 30 times more than budgeted, so the Navy ended up building the Mystic and the Avalon at Lockheed’s facility in Sunnyvale.

The Avalon and Mystic, which is on display at a maritime museum in Mystic, Conn., are 50-feet long, 8-feet in diameter and weighed 36 tons, and Taylor said they could make 1-2 knots and a maximum 5 knots.

The DSRVs were designed to dive to the seafloor where a crippled submarine would be lying possibly at a 45-degree angle, making “mating” the two subs together difficult. Once the Avalon’s “transfer skirt” — looking “Like a big upside down coffee cup” — was over the sunken sub’s hatch it sealed itself and then water was pumped out to allow the hatches to open, theoretically.

Taylor said in their training, done mostly off San Clemente Island, the deepest they were able to go down and open a hatch was 800 feet.

The Avalon’s crew was a pilot, co-pilot and four crewmen, Taylor explained. They could fit a lot of rescued sailors inside. “Twenty-four people per load is about what you can take,” Taylor said.

The Avalon and Mystic were “four spheres welded together.” They were designed to fit inside a C-41 cargo plane, and be launched from a submarine or a ship. It took four, C-41s to carry the DSRV and all of its equipment, Taylor said.

They were stationed at Lockheed’s Ocean Laboratory in San Diego for many years. During a 1979 exercise with the British Navy, Taylor said they were able to mate with a British diesel submarine “on the bottom of the Irish Sea. It took us 48 hours to respond [from San Diego] and we proved it could be done. We had the capability and could do that. It was a wonder to see for me.”

In the Avalon’s 37-years of service, Taylor said they never had to rescue anybody, but, within the program’s first 5 years, they proved it could be done.
“Thank God we didn’t have to use it,” Taylor said, “but it was there if we needed it.”

He said it all boiled down to one thing — rescuing people.