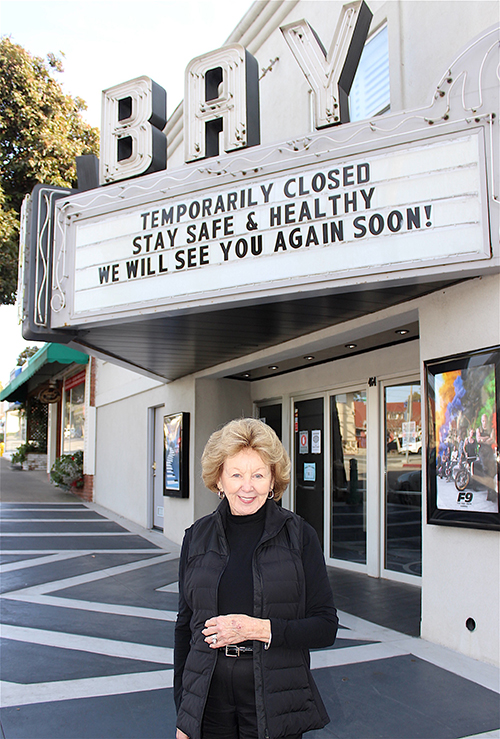 Mary Lou Jannopoulos and her family have owned the Bay Theater since 1973 but due to changes in the movie industry and the coronavirus pandemic’s business losses, the family has decided to sell it, asking price $1.5 million. Photo by Neil Farrell

Mary Lou Jannopoulos has seen a lot in the 25 years she’s owned The Bay Theater in Morro Bay, but changes to the movie business plus having to shutdown for most of 2020 due to the coronavirus pandemic response, has her saying enough is enough and putting the last single-screen, storefront theater (sans parking lot) still operating in SLO County up for sale.
She and Jim Jannopoulos, when they got married, had a big blended family with his three young daughters and her two young sons. Over the years, all the kids have worked in the theater.

Over the years they owned 16 theaters, Mary Lou says, but when they met he was working as a “booker” for Fox West Coast, eventually becoming an owner.

His mother was in real estate for Fox and Mary Lou says she was the one who got him to leave a banking job for the movie business, which paid more money.

“When I met him,” she laughs, “All the girls used to warn me, ‘Watch out for Jim,’ and I didn’t heed their call.”
The Bay Theater was originally built in 1942 by the Army Corps of Engineers, explains Heather Jannopoulos, Mary Lou’s daughter, who handles the Internet side of the business, runs the projection equipment, and trains all the employees. She also keeps the books and Mary Lou says that with her and daughter-in-law Denise, the Jannopoulos Girls have been running the Bay Theater for the past 25 years.

They bought the Bay in 1973, from Ruth and Ted Morris. “She had been in the Follies,” Mary Lou recalls. “And she was quite a poet. She loved the symphony and I had tickets to the Santa Barbara Symphony at the Arlington Theater.”
Mary Lou was living in West Lake Village with the kids when they got the Bay and moved up here (Pismo Beach) in 1995, when their marriage was breaking up. Her son, who is a contractor, she says, built a second story atop the storeroom out back for Jim’s office and he moved here. The front of the building had a small apartment that is separate from the theater.
But when she was ready to move north, the apartment was a mess. “Upstairs was horrible,” she recalls. Her contractor son demoed everything down to the studs in the walls and rebuilt it.

“Someone could live up here,” Mary Lou says of the apartment. There’s also an office and the projector room is up there, too. When Jim got ill, Mary Lou says, she agreed to take over the business.
“Thank God I had my son and daughter-in-law,” Mary Lou says. “I had never really worked.” Her job was raising the children and when Jim died, the Bay was the only theater left.

“It’s been a great little business,” says Mary Lou. But when she took over, it was in rough shape, with sticky floors, icky carpet and torn up seats. “The screen was torn,” Heather says. “People called it ‘The Pitt.’”
“The first thing I could see was the electrical system was bad,” Mary Lou says. “You could see sparks. It cost $50,000 to do the electrical but it had to be safe.”

Over the past 25 years, she has put a lot of hard work and money into the theater, including twice buying new seats and fixing another serious problem in 2012 when they discovered a water pipe — from 1942 — was leaking under the cement floor and causing the floor to swell. That led to tearing out the lobby floor, as well as the sidewalk out front, and upgrading the restrooms to be handicap accessible.

They originally bought used seats from Festival Theater to replace the old ones. “We had to power wash all of them,” says Mary Lou.

The new seats recline with fold-up armrests and cost $250 each. There are 314 seats in the theater, which also has empty spots where wheelchairs can park.
“A friend in the business said I should buy cheap seats and change them every 5 years,” Mary Lou says, “but that didn’t make any sense to me.”

They also had to buy a new digital projector that cost $75,000. Mary Lou shakes her head when asked about her asking price of just $1.5 million for the theater?
“That’s why there is so much activity [with potential buyers],” she says, “Because I’m practically giving it away.”
The Bay Theater should sell quickly, not just because of the low price, but because it is truly in great shape, “turn key” as all three Jannopoulos girls say.

Mary Lou acknowledged how much the little theater has meant to the community.
She’s proud of being able to hire so many young people over the years; many of whom have come back to the theater with their families.

Over the years, she says, many of her young employees, who had strict work rules like “Don’t be late for work,” have gone on to do great things. She recalls running into a young woman, “Stephanie,” who had worked for her years ago and is now selling homemade soups at a café across the street. They met at Costco and she told Mary Lou, “’You and your family taught me so much.’ She wasn’t organized in her life, but with us she had to be on time and learn to get along with co-workers. And it all started at the Bay Theater. That was a nice tribute.”

The movie business has changed a lot with longer mandatory runs for movies, to larger cuts of the take, to the most recent practice of simultaneously releasing big-budget movies into theaters and streaming services.
“If they simultaneously release films to streaming and theaters,” Denise says, “you will get half the business you would normally get.”

Heather says, “Some movies you need to see on the big screen,” in reference to watching a big blockbuster on a 6-inch phone.
Mary Lou says she’s told people who’ve asked, “We’re not throwing in the towel. I can’t get films.”
But even the few films that have seen theatrical release during the 11-month coronavirus shutdowns the movie companies now take 65% of the take. Denise says that for a long time the take was 35%, which was low enough to still make a profit. “This has been going up for a long time,” she says, “it was 35% 10 years ago.”

The movie companies are also requiring films have longer runs. “They say you’ve got to have it for this long,” Denise explains, “for this percentage and for a minimum of four weeks.”

“In this small town,” Mary Lou says, “three weeks is hard for us.” Plus employee costs have been on the rise and the local business taxes, utilities and a health department permit (for the concession stand) have gone up.
“The health department permit used to be $50, and now it’s $300,” says Mary Lou. “It’s the same thing with the City business tax.”
None of these bills has been suspended or reduced during the pandemic and Mary Lou says she’s had to dig deep into her personal savings to keep it going.

At one point, they were going to reopen and had figured out the seating arrangements to socially distance the audience but at 25% capacity, it would have cost more to run the films, and then they couldn’t get films to show.
The theater has a 12-foot wide stage that is mostly hidden by the screen. Perhaps new owners will look into expanding into live music and plays, but Denise cautions that the movie companies also require theaters to be open daily and run their films every day, which could limit the available time for live shows.

It’s been a good life for the Jannopoulos girls. “As a family running it,” Mary Lou laughs, “we didn’t get rich, I can tell ya.”
She says the theater was very profitable up to 2020, and over the years, they’ve put much of the money back into the business, toward achieving her goal of providing the community a theater they can be comfortable in and proud of.
Mary Lou hopes that whoever buys it will keep it as an entertainment venue. “It breaks my heart to have to sell it,” she says. “I hope it’s kept as an entertainment source. We’ve spent all these years here. I’ve loved it.”