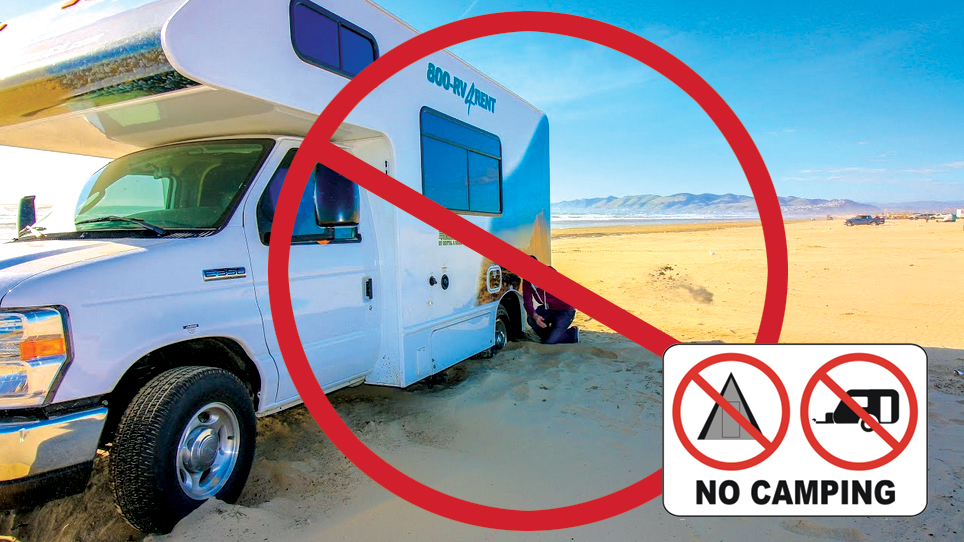 Should the City of Morro Bay offer RV campsites along the waterfront to bolster the Harbor Department budget? A group of citizens feels so strongly against it, that they’ve turned in a petition that would put the matter to the voters to decide “Yes” or “No.”

In 2020, the Harbor Department got permission from the City Council and then the Coastal Commission for a pilot RV camping program that established nine spaces in a vacant lot adjacent to Morro Creek, three at Coleman Park, seven in the Triangle lot and three in a parking lot on the way to Tideland’s Park, as a means to increase revenues for the department, which were hurt by the Coronavirus Pandemic response after the nationwide emergency hit in March 2020. The pilot program began in September 2020 and though it started off sluggishly, has produced as predicted.

Betty Winholtz, Carole Truesdale and Jim Curnutt on Dec. 29 turned in petitions with some 1,017 signatures for a ballot measure that would prohibit RV camping along the Embarcadero and at Morro Rock.

If passed, it would greatly curtail the camping program, eliminating the creek area, and Tideland’s Park (Coleman Park has already been eliminated).

The Petition gives four reasons for passing what would become a new City ordinance:

• To protect the natural beauty, sensitivity, and intrinsic value of the named areas.

• To prevent the visual and physical degradation of public places by private housekeeping.

• To preclude competition with local businesses and State (Parks) campgrounds.

• To preserve day use parking.

The actual text of the measure reads: “The people of the City of Morro Bay do ordain as follows: An addition to the Morro Bay Municipal Code, Chapter 8.24 — Camping, Section 8.24.010 — Prohibited at certain times and in certain places, D. Tent camping and all classes of recreational vehicle camping, dry or otherwise, are prohibited along Embarcadero Road, including Tidelands Park, and along Coleman Drive, up to and including Morro Rock parking lots, This shall not affect any current private business.”

When the City Council first reviewed the pilot program proposed by the harbor department, it got some pushback from a few citizens, especially with a plan that would have put camping sites at the base of Morro Rock and by Target Rock. But it passed with relative ease and little opposition after those areas were taken out.

But when residents first saw the campsites actually being used, especially at Coleman Park, many were very upset. It was the nearness of the Coleman Park spaces, adjacent to the bay and the Harborwalk public bike and pedestrian paths that seemed to shock them most.

The lot by Morro Creek had been used mainly for storage, and was also leased to a local business, the Master Baiters, a company that prepared fishing long lines with hooks and bait for local commercial fishermen. They cleared out when the City decided to turn the area into camping spaces.

The Harbor Department was hoping to clear some much-needed cash with its pilot program and it sure did. Harbor Director Eric Endersby said the first year they grossed some $244,000 (since September 2020), which he said would be higher with bookings that were already sold through an online booking service. The City’s system requires payment at the time of booking.

The department had sold the Council on the idea predicting about $150,000 a year in new revenues. That was music to their ears, as the City Council has struggled for several years to come up with creative ways to increase the Harbor budget after the power plant closed in 2014 and Dynegy (now Vistra Energy), cancelled its outfall canal lease (for the heated discharge waters) that paid $250,000 a year to the Harbor Department.

Endersby said the camping program also collected $17,000 in transient occupancy taxes that was sent to City Hall, and also paid some $2,500 in the County tourism taxes (1% of a night’s fee), and $3,000 in credit card fees.

So the true gross profits for the program’s pilot year-plus a couple of months were closer to $194,000, a sizable amount considering the highest grossing lease sites pay about $100,000 a year to the Harbor Department.

Endersby said that was enough to fund a full time person.

Permit In The Works

The City is in somewhat of an awkward situation, as the department has already applied for a coastal development permit from the Coastal Commission to make the camping program permanent, an application that has yet to go before the Commission.

Endersby said their CDP application asks for 19 total spaces — nine at Morro Creek, seven at the Triangle lot, and three down at Tideland’s Park.

The citizen’s initiative, which must still have the signatures verified by the City Clerk’s Offices working in tandem with the County Elections Office, would seem to eliminate the Tidelands Park and Morro Creek camping areas, as they are located on The Embarcadero, but not the Triangle lot, which is actually on Front Street.

Even if the Commission grants the CDP, the citizen’s initiative would trump it and what could be a healthy revenue source for the Harbor Department, would be reduced greatly.

And even the Triangle lot’s spaces are a bit rocky, as the Maritime Museum Association, which has a museum and displays at the entrance to the lot, hopes to be able to install an exhibit building (a donated Quonset hut) in that camping area and greatly expand the footprint of the museum.

The Harbor Department has already taken over nearly half the 1-acre lot for a boat storage yard, one of the other things it’s done to increase revenues. Along that line, the department also initiated a day use paid parking program at the public boat launch several years ago for trucks and boat trailers of sport fishermen. That parking program has to bring in some $20,000 a year when first proposed. But it too had some upgrades to the kiosk, which had become obsolete and the paid parking permits are done online now.

The pandemic laid bare the money woes the Harbor Department has been having for years, as maintenance monies for upkeep of its public facilities has been hard to come by.

As it stands now, the department needs about $800,000 a year to maintain the public facilities it has now, with a total unmet maintenance need estimated at over $10 million.

In the initial days of the coronavirus response in Spring 2020, the State shut down motels, restaurants and all “non-essential” businesses, ostensibly to “flatten the curve” of infections and stop hospitals from being overwhelmed with patients.

That State order was coupled by a citywide order that sought to shut down tourism for several months, and restricted the commerce that waterfront businesses could conduct.

Since the Harbor Department’s revenues come from lease site payments, as well as slips and dockage fees, the harbor’s budget stagnated. The Council also initiated a deferral program that let leaseholders defer lease payments for several months, though all or nearly all have since caught back up.

The City also embarked on a PR campaign in Summer 2020 discouraging people in the Central Valley from coming to Morro Bay for vacation.

Nevertheless, the Summer of 2020 was by most accounts very busy even though the motels and restaurants were limited in how they could conduct business.

Ironically, the anti-RV camping petition comes as another group of citizens has begun a petition drive to enact an annual $120-per year “parcel tax” ($10 a month) on all private property in town — residential as well as commercial — that proponents claim would raise some $680,000 a year to address the Harbor Department’s maintenance needs. The tax would appear on property tax bills.

The three men spearheading that effort — Bill Luffee, Homer Alexander and Ron Reisner — are currently gathering signatures for the parcel tax initiative and have until May 9 to gather the necessary voter signatures and get it on the ballot in November.

There are some 8,268 registered voters in Morro Bay, according to figures from the City Clerk. So the parcel tax petition drive will need some 827 valid signatures (10%) to qualify.

City Clerk Dana Swanson said, the signatures number is based on the County Clerk’s voter registration report to the Secretary of State in place at the time the “Notice of Intention” to circulate a petition was published.

“The [RV camping] notice was published on July 22,” Swanson said of the anti-RC camping measure, “and the voter registration report dated February 10, 2021 requires 820 valid signatures to qualify the petition. I mention that because a later report dated August 30, 2021 [and used for the parcel tax petition drive] established a slightly different number of signatures required for the Harbor Infrastructure Tax Initiative [827].”

When Will It Appear

The anti-RV camping measure proponents turned in 1,017, and those are being verified via the County Elections Office, so it might not be ready in time to make the June Primary Election.

Also, because it’s a new ordinance, the City Council will have a chance to simply adopt it and skip an election. If they don’t approve it, it would go to voters.

Normally, there wouldn’t be anyone from Morro Bay on a Primary Election Ballot, however, Councilwoman Jen Ford, who was appointed to replace the late Councilman Robert Davis, must stand election in June along with anyone who challenges her for the seat, assuming that she will run.

The winner of that race will face re-election in the November 2024 Presidential Election, when Davis’ term expires naturally.

The City was still sorting out the anti-waterfront camping initiative and had not decided when it might appear on the ballot, as signature verifications take some time.

So while it may not make the June vote it would surely be ready to appear on the ballot in November, potentially along with the parcel tax measure, provided that petition drive is successful.

Also up for election in November will be Mayor John Headding, Councilman Jeff Heller and Councilwoman Dawn Addis, though Addis has declared her intentions to run for State Assembly in June. Her situation could trigger another muni code issue.

M.C. 2.06.030 reads in part, “When a councilmember in the middle of their term moves to an alternate office it also denies the citizens of Morro Bay the right to vote for the person who will fill the vacancy created by that move. If a councilmember wishes to run for alternate office before his or her term has expired he or she should resign from their seat so that the voters may elect their replacement in an orderly manner.”

That would seem to count only for council people seeking higher office in mid term. City Clerk Swanson said she wasn’t sure if Addis could in essence seek election to both a City office and a State one.

Swanson said that scenario “might require some legal analysis on whether those are conflicting offices — I’ve not looked into that, as it seems like an unlikely scenario.”

Those council races plus the possibility of two measures would make the November 2022 General Election a busy one indeed for Morro Bay voters.