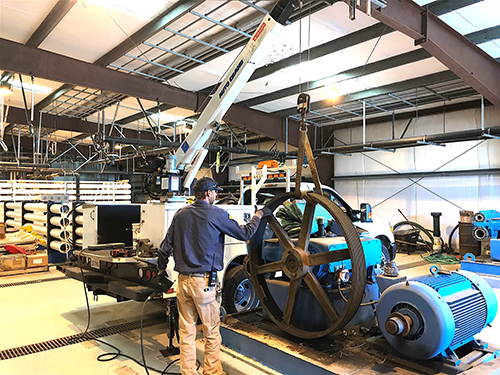 In the early 2000s, Morro Bay had perhaps the best drinking water portfolio of any city in San Luis Obispo County with State Water and a drought buffer allocation, the Chorro and Morro Creek groundwater basin wells, and a reverse osmosis desalination plant.

It was expensive but all appeared to be solid assets.

But a lot can happen in 20 years, and the City now finds itself abandoning desalination, and giving up the water in Chorro Valley, which before State Water arrived in the mid-1990s, provided the lion’s share of the town’s drinking water.

As for the future, the City’s $130 million Water Reclamation Facility or WRF will become the back-up source, injecting water into the ground at a site off Hwy 41 and pumping it out through the Morro basin wells, located in and around Lila Keiser Park.

Joe Mueller, the City’s Utilities Division Manager, said the Carollo Engineering report, a.k.a. the “OneWater Plan” from October 2018, analyzed the current status of each water source and frankly, the results were not good.

Mueller, who came to Morro Bay in 2017, said the desal plant was built in 1992 under an emergency order. “The construction was not the best,” he said. “They built it and then put it in mothballs right away.”

The first time they had to use the plant for an emergency, Mueller said, it plugged immediately with iron oxide (rust) that came through five, brackish groundwater wells strung along the 1200-1300 blocks of the Embarcadero that fed the plant.

That initial stumble meant having to add a large settling tank, so the iron oxide could settle out of the water before being sent into the plant for filtering through five, filter “trains,” each with eight tubes of filters.

Big pumps forced the seawater through the tubes and out the other end came drinkable water. It was state-of-the-art at time, Mueller said.

The City in 2009 added two new trains of filters designed to filter groundwater from the Morro Creek wells, which had become too high in nitrates, and while those filter trains work whenever the Morro wells are pumped, the desalination side has sat mostly unused.

Since it was completed, Mueller said, the desal plant has produced just 6.6 million gallons of water. “That’s about 2 months worth of water,” Mueller said. “That’s all it’s produced.”

The plant’s been snake-bit since day one. “They had a lot of challenges,” Mueller said. “They used two different types of filter systems. In early 2000 they put in a new [settling] tank and it got plugged up too.”

Originally, the City was going to discharge the brine waste from the desalination process through the sewer plant undersea discharge pipe — jointly-owned with the Cayucos Sanitary District — but the CSD objected. So the City piped the brine out a separate line discharging into the power plant’s outfall canal at the base of Morro Rock.

The plant’s permitting was odd as well, as Mueller said the Coastal Development Permit only allowed it to run 15 days a year anyway, and no more than 5 consecutive days. Asked why that was? Mueller shrugged and said he didn’t know. “It was just in the permit,” he said. “It was another challenge on the seawater side.”

In 2017 the City needed to test the seawater wells and when they opened up the vaults, the pumps were ruined. “None of them worked,” Mueller said. “The electrical systems were not rated for seawater. They had the same kind of electrical boxes you can buy at Miner’s Hardware. They were all corroded and rotted. Only two of the five wells we were able to get samples out of them.” In essence you had 30-year-old wells sitting unused in seawater.

On top of that, the plant itself hadn’t run since 2008 and membranes in all the filter trains were dried out and ruined, too. “You cant’ store those membranes dry,” Mueller said.

The plant’s pumps that push the water pressure up to 1,000 psi, “were not safe anymore. There was a blowout at one time that blew out the wall.”

He added that he once spoke with a high school teacher who said the pumps “whistled and howled” whenever they ran. The pumps were “piston” pumps and obsolete. The company that made them went out of business, so parts aren’t available to fix them.

The OneWater Plan concluded the desal plant was past its useful life and since it sits in a flood plane and tsunami run-up zone (just as the sewer treatment plant does), if the City wanted to borrow money from the State to fix it, it would have to be relocated away from the coast.

Mueller said the City crew has been dismantling the seawater part of the plant over the past several weeks; they’ve been able to do 90% of the work in-house and recycle much of the plastic and metal.

“The whole plant had to be replaced,” he said. When running, the plant could produce about 750,000 gallons a day but half the water was drinking water and half was going back into the ocean. It was expensive too, $2,932 an acre-foot, compared to State Water’s $1,500.

Instead the City turned to the WRF project, and decided to hang onto State Water as the primary source. The City’s wells would be the new emergency supply. But that too had problems, as the Chorro Creek well field, which once produced nearly all the City’s water, had come under pumping restrictions written into the prescriptive water rights permit from the State.

The City can’t pump almost all of those wells whenever the flow in Chorro Creek falls below 1.4 cubic feet per second, roughly the same flow that comes out of a low flow showerhead. The restriction put Chorro Creek wells out of reach in summer, when demand is high and the creek at its lowest.

And wouldn’t you know it, the Chorro Creek wells were all ruined, too.

“We haven’t used the water rights in Chorro Valley since 2010,” Mueller said, “about the same time we put in the brackish water filters” at the desal plant.

The Chorro basin is also high in nitrates and Mueller said there was no way to treat that water before it reaches the City’s tank farm on Kings Street. And there were also several City water customers out in Chorro Valley who couldn’t get treated water from the City and were being provided well water.

The City was still obligated under its permit to test those wells every month so Mueller said they contacted the State Department of Drinking Water and “de-powered” (disconnected from electric service) the pumps.

“It doesn’t change the permits,” Mueller explained. “And we’re saving all the lab testing costs. Same for the desal wells. We can’t physically use them.” He estimated the testing costs run about $30,000 a year.

So desalination and Chorro Creek are out as City water sources. The City does have an ace in the hole, however. Mueller said they have an agreement with the California Men’s Colony to access water from Whale Rock Reservoir that would be treated at CMC’s treatment plant and sent back to Morro Bay through the Chorro Valley Pipeline, which brings State Water to the City.

So now the City is down to State Water and the Morro basin wells, and plans are now to use the WRF’s “Indirect Potable Reuse” or IPR recharging capability to supplement the Morro basin groundwater.

So the WRF, when it’s finally up and running will discharge the highly treated wastewater into the ocean and only inject into the ground when the Morro wells are scheduled to be pumped. The injected wastewater must sit two months in the ground before being pumped out. So the City will have to start injections well in advance.

Mueller said, “If we don’t put the wastewater in the ground, we will have seawater intrusion if we continue to use the Morro Creek wells. IPR was the only thing that made sense for our town. State Water is the most economical and high-quality and we’re still going to be paying for it until 2038.”

He added, “There may be a day when we can stop State Water and use the IPR but that day’s not here yet.”

How is Morro Bay’s water supply today? “We’re in better shape than our neighbors,” he said. “We can run for a couple of months if State Water went down. And if something happened to the desal plant we can turn to CMC.” The desal plant will continue to be used to filter Morro Creek basin water and will still have just the two brackish filter trains (each with 18 tubes).

So the WRF and its IPR at a cost of $130 million, becomes the City’s back-up water supply. Morro Bay residents may have thought the IPR was going to run all the time, it’s not.

“We’re proposing,” Mueller said, “to run the IPR three to four days a month. That’s all we’re going to run it.”

If readers would like to see an easy to understand explanation of the City’s plans for the water system, Mueller’s staff has put together a video. Estero Bay News will also post that video on our Facebook Page.

The City’s final OneWater Plan is posted on the City website, see: www.morro-bay.ca.us/DocumentCenter/View/12500/OneWater-Plan-Final.