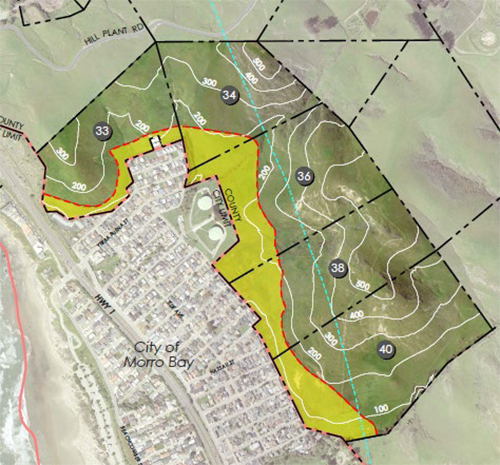 This map from the City of Morro Bay shows the extensive landholdings of Chevron that lie adjacent to the Morro Bay City Limits. The five parcels being proposed for inclusion into the City’s ‘sphere of influence’ are in dark green, with the light green areas showing where the City says homes could be built, one per lot. The white lines are topographical markers showing elevation.

Work to complete the purchase of the Chevron Dog Beach took another big step forward on March 23 when the Morro Bay City Council formally voted to purchase the property from the Cayucos Sanitary District, part of a much larger effort to preserve Chevron’s hundreds of acres of coastal hills.

The Council voted 4-1 to complete the $338,000 purchase of Dog Beach, the roughly mile-long beach separating Morro Bay and Cayucos. The CSD had purchased the two beach parcels as part of its sewer treatment plant project, reusing one of two undersea oil loading lines running offshore under the sand for a discharge line.

The Chevron Estero Marine Terminal loaded tanker ships moored in Estero Bay from 1929 to 1999, when it was closed upon the completion of direct pipelines from the San Ardo and Oildale well fields to a Southern California refinery.

The City Council also agreed to make application to the Local Agency Formation Commission (LAFCo.) to have five, large lots along Panorama Drive, Zanzibar and Blanco streets that border the City Limits, brought into the City’s “Sphere of Influence” or SOI, with a possible eye at being annexed into the city at some future date.

The City will also ask to have a parcel east of Hwy 1 adjacent to Chevron’s former “Shore Plant” and Toro Creek Road removed from the City Limits, turning it over to County jurisdiction.

The CSD is expanding a lift station on that parcel for its new treatment plant, which it also bought from Chevron. That parcel will be deeded to the County Parks with the CSD retaining a permanent easement for its pipelines.

The land transactions are the early stages of a much larger effort to conserve the hundreds of acres that Chevron owns, essentially the entire area between Morro Bay and Cayucos.

The Morro Bay Open Space Alliance is also involved in the overall project, more specifically the preservation of a vast canyon area located east of the City’s Del Mar Park, which is the next phase of the project with fundraising just now getting underway.
Money for the City’s purchase of Dog Beach was donated by the CLC and Land Conservancy of SLO County ($188,050), and the California Coastal Conservancy ($150,000).

In its most recent newsletter, CLC thanked its supporters and said, “As you may recall, the plan to purchase the southern end of Dog Beach from the Cayucos Sanitary District and to have it become a part of the City of Morro Bay is actually the 2nd step of the larger Toro Coast Preserve Project.”
For its part, Chevron conditioned the beach parcels’ sale on the City applying to have the five “Panorama” lots put within the City’s sphere of influence.

“When CSD acquired the Dog Beach Lots from Chevron,” the City report reads, “Chevron retained a right to reacquire the lots under certain circumstances. As this right to repurchase is on record title, the City would take the Lots subject to that right — unless Chevron amends title.”

There’s a bit of a quid pro quo going on here. “Chevron has agreed to remove its repurchase right from record title if the City authorizes submittal of an application to LAFCo., to amend the City’s SOI to include five lots above the Panorama area.”

That catch didn’t set well with some residents that commented before the meeting with many pointing out that the hillside above Panorama Drive is subject to movement in heavy rain years and thus unsuitable for any development.

“I oppose any residential development of 5 lots of the Panorama property,” wrote Belinda Reyna, a neighbor of the property. “The current narrow, poorly paved roads in North M.B. do not support any extra traffic. These hillsides are subject to landslides, affecting all the current residents below. We have had landslides in the past.

“I would approve leaving it open with trail access.”

Former Mayoral candidate, Tina Metzger questioned the wisdom of annexing landslide prone hills. “Are you sure you want to bring into the MB City Limits the Panorama Drive Chevron parcels, which have the ‘High Landslide Risk Rating’ and will be a potential City liability if the existing topography is disturbed? Will the City’s insurance cover any liability concerning the known High Landslide Risk?”

The last time the area significantly slide was 1995, when we had over 30 inches of rainfall over the winter. According to long-time area resident, Mel Honda, “Large sections of soil have moved twice in years of heavy rain, once in 1960 and again in 1995, causing major damage to homes, property and roads. I was present in ‘95 when the last major earth movement occurred. Heavy rain saturated the soil 30-feet deep, creating a slip plane where the water hit bedrock.”

He noted that in 1995, a large section of the hillside above Panorama about half way up the hillside, moved and damaged numerous homes. That event also cracked a hole in the Whale Rock Pipeline, which runs along the eastern edge of the City, and led to the Whale Rock Commission rerouting its pipeline down to Tide Avenue for several blocks.

Water and sewer lines were severed, retaining walls were cracked and displaced, several homes had their foundations cracked, and some had to be demolished.

After the 1995 slide, Chevron conducted an extensive hydrological study of the hillside and determined that when rainfall hits about 30 inches or more in a winter, the land is subject to movement.

In that aftermath, Honda said. “Chevron, owner of the property, held an informational meeting for neighbors in the affected area. City officials, Chevron representatives and the California State Geologist were present and explained why the slide happened and that the area should not be disturbed in order to help prevent a repeat of the incident.”

The five lots vary in size, ranging from 6.3 acres for a lot along Zanzibar, to 14.8 acres for a lot above the old Navy Fuel Depot property at 3300 Panorama Dr. The majority of the “buildable” areas on the lots are below 200-foot elevation, according to a City map. In all, the five lots cover some 36.5 acres.

Former Councilwoman and council critic, Betty Winholtz urged caution. “Free use of dog beach as it exists today may be hampered by the acceptance of the grants. Currently, Prescriptive Right guarantees dogs and their people access to the beach lots — without having to be purchased.”

Several commenters noted the use of State monies via the Coastal Conservancy, and the possibility the City might have to install snowy plover protections, as State Parks did two decades ago on Morro Strand Beach. One of the first things State Parks did was ban dogs on the beach to protect the threatened plovers.

The Open Space Alliance was supportive of finishing the deal for Dog Beach but cautious about the Panorama lots. “The chief benefit in negotiating with Chevron regarding limited development on the Panorama Lots,” MBOSA said in a letter to Council, “is for the City to gain control of it to ensure compliance with City standards and, importantly, to preserve the great bulk of the hills in the view shed as undeveloped open space, zoned for agriculture.”

MBOSA called on the City to limit development to just one, single family home, with allowable granny units, and restrict building to “as low as possible on the hillside. We are all aware of the potential for landslides in the area and the need to locate any development carefully. We expect to see a development plan with environmental concerns defined along with clear mitigation steps for any problems.”

Will Dog Beach remain just that, a beach that allows dogs? “It will remain open to dogs,” Community Development Director Scot Graham replied, “but we do need to develop a management plan within 3 years of purchase to address public [and dog] access and to protect the environmentally sensitive habitat that is located on the property. The intent is to leave it as an off-leash dog beach.”

How does a park master plan process work? “We would either contract for a consultant to prepare the document, or we could possibly work with the land conservancy groups to develop the plan.”

Would the change in ownership and jurisdiction change who has the lead on the bike path project? “County is lead agency on the [connector trail] project,” Graham said. “They will be going through a consolidated coastal development permit process; meaning instead of getting separate coastal development permits from the City, County and Coastal Commission, they will just get one CDP from Coastal Commission.”

Another possible future issue is with paragliders who take off from the hilltop above Cayucos and land on the bluff at Dog Beach.

“Paragliders would be considered an aircraft,” Graham said, “and are prohibited from landing within the city unless the person has a Special Use Permit.”
As for the Panorama lots, Graham said they would put deed restrictions on them.

“We will condition/restrict them to allow one home per lot [includes ADU’s] and to prohibit subdivision; and Chevron is OK with this.”

As for the connector bike path, is the City going to take maintenance responsibility for it? “Yet to be determined,” Graham said. “Maintenance will likely be spelled out in some type of MOU [memorandum of understanding].”

Graham added that they hope to make application to LAFCo., regarding the Panorama lots by the end of April and will also have to put in a “detachment” application for the CSD’s lot east of the highway.

LAFCo., stripped the City of its entire sphere of influence in 2007 when it determined that the City could not annex the property, as it hadn’t shown any interest in annexation and because of a voter initiative that calls for the City to seek voter approval for all annexations to the city.

That vote has never been challenged and the City, through its WRF project, reportedly got a legal opinion that it is unconstitutional.

That issue may soon come to a head, as the City is also contemplating the eventual annexation of its sewer treatment plant site, which also sits outside the City Limits.