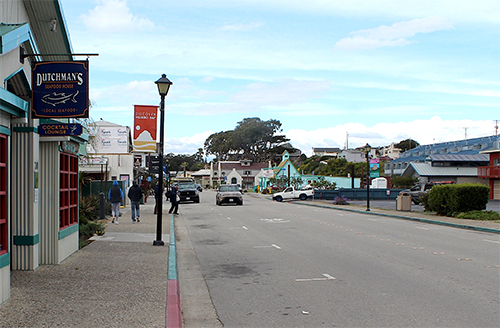 The City of Morro Bay will turn the Embarcadero, from Harbor to Marina Streets, into a one-way street going north, eliminating nearly 100 on-street parking spaces. The changes will turn the heart of the Embarcadero, normally filled with card, into the ghost-town look that it took on with the coronavirus shutdown of the economy in mid-March.

The coronavirus pandemic has yet to kill anyone in Morro Bay, but the fight against the virus is about to kill nearly 100 parking spaces in the heart of the Embarcadero.

The City Council at its June 23 meeting voted to at least temporarily eliminate on-street parking on the Embarcadero from Harbor to Marina Streets, and close the southbound lane of traffic, effectively turning the heart of the Embarcadero into a 1-way, 1-lane street heading north towards Morro Rock.

The vote was 4-1 with Councilman Jeff Heller, dissenting. Heller said he preferred the street be closed entirely to traffic.

Justification for the change was concerns that tourists are not observing social distancing in the fight against COVID-19. And with the waterfront being packed with visitors the past several weeks, few of which have been social distancing and with sporadic wearing of face masks, the 4-foot sidewalks along much of the Embarcadero apparently aren’t wide enough to spread people out sufficiently.

Parking is a huge issue in Morro Bay especially on the Embarcadero. The City requires adequate parking be included in developments, and has an in-lieu fee program where parking can’t be accommodated that values parking spaces on Embarcadero at $15,000 each. So the City’s removal of 97 parking spaces equates to $1.45 million worth of parking, under the City’s own valuation system.

That would seem an extreme response to fight an invisible, microscopic virus, but it’s in keeping with other odd measures that have been taken locally.

Those would include closing roads leading to beach parking lots including the Rock parking lot, the largest beachside parking lot in SLO County, and closing Atascadero Road at Morro Bay High to stop people from going out to the Pit Beach at Morro Creek. Yet the beaches remained open.

The City closed the launch ramp to everyone except commercial fishermen, and then opened it up to SLO County residents only, before changing that to allow anyone to use the public facility. But the fish cleaning station remains closed.

And of course there is the most puzzling action of all — the closing of State Park Road to all traffic by the State Parks Department, which has never been explained to the public.

State Parks opened the Main Street entrance to the Park in order to allow the Bayside Café to reopen. Bayside Café is a concessionaire to State Parks. But the heavily used shortcut from Los Osos to Downtown Morro Bay remains closed to through traffic.

The City tried posting the sidewalks on Embarcadero as one-way thoroughfares, which was largely ignored.

Harbor Director Eric Endersby said the change will turn the parallel parking areas on the east side of the street into commercial loading zones and the West side will be entirely for pedestrians.

“We’re going to test it out, see how it looks and see how it works,” Endersby said. He added that the City has gotten permission from the Coastal Commission to make the change without a coastal development permit process, with the understanding that these are not normal times.

Should the change become permanent, a CDP will be needed.

City Manager Scott Collins, who will be responsible for enacting these changes as the acting Public Works co-director, said, “I am going to work with businesses along the waterfront in the impacted area to help make this work for them, over the next week or so [for considerations around deliveries, trash pickup and parking],” Collins told EBN. “We are also developing plans to program the street-end areas to make it inviting, probably to include tables and chairs. Likely this will go live in a couple weeks.”

The road ends in question are at Morro Bay Boulevard, Pacific and Marina streets. That would allow restaurants space to set up outdoor dining areas and businesses to put booths and sell merchandise in the streets, sort of a three-block mini street fair. Also, the Council voted to loosen up reigns on temporary vendors, which could get a license and set up shop in the street.

The Council acted despite getting serious pushback from some Embarcadero merchants.

Gregory Siragusa, and his mother, Jane Siragusa, owners of the Gallery at Marina Square were adamantly against the street closure. “We are adamantly against any closure of the Embarcadero,” they wrote, “or any limiting of access or parking for any of the businesses down here. The customer base of many of our Embarcadero businesses, especially our own includes far more demographics than just the young and healthy. Meaning, many customers have mobility issues or have limitations in how far they can walk and move from the street, and shutting down street access would harm our business, and our ability to survive an already challenging business environment due to COVID‐19.”

Siragusa said their business had suffered great losses from the economic shutdown. “We all have suffered significant cash flow issues arising due to reduced customer flows and months of being closed, the reality is that any cutting of customer access to our business may be fatal to us, and many other businesses just like us.” The Gallery at Marina Square has been in business over 20 years.

Mollie, Jeff and Roger Anderson, owners of the Anderson Inn and the master leaseholders that includes the Galley Grill and Bar, were also against it. “Been on this waterfront since 1966,” they wrote the Council. “A perfect way to create more traffic jams etc., and lose more precious parking would be to go ahead with your closure or partial closure.

Anyone who would spend about an hour observing should come to the conclusion… It won’t work.

We are all struggling enough trying to come out of these trying times.”

Paula Radke of Paula Radke Art Design, who will be moving from Dutchman’s Landing to Marina Square (both are within the closure zone), said, “This is taking your idea too far. Not all stores can put products on the streets. Please don’t limit my customer’s parking or access to my store. There is plenty of room to expand your restaurants to the sidewalks without this.”

And Stan van Beurden of Hofbrau and the leaseholder of the site with House of JuJu, said, “Closure of Embarcadero is a bad idea. How will that help any business?

Spilling people onto the roadway is not a solution to increasing anyone’s business. More importantly customers will avoid going down there plus you will be removing multiple parking spaces without a well thought out solution to that dilemma.”

Former Councilwoman Betty Winholtz was concerned about the $20,000 price tag for the closure, given the City’s dire financial straits from the loss of tax revenues due to the virus’ economic shutdown.

“The hoped for sales tax revenue to offset this expense is not given,” Winholtz said. “Or, is this purely a health and safety move due to COVID-19? How many businesses are committed to taking advantage of this change? The Staff Report implies this may not be seen as a favorable move by the retailers/restaurants. Will the hoped for revenue go into the Harbor Fund or the General Fund?”

The City staff report said the costs for this would likely not be eligible for reimbursement under the COVID-19 emergency.

Resident Lynda Merrill was bit more upbeat. “This could be a pilot program to see how it would work. It might be fun for people to enjoy the freedom from cars.

We could offer entertainment out in the street, and open areas? Businesses could offer tables out in front of their businesses and take out and be able to serve people better?”

← Previous: Harbor Budget — Bailing Water On A Sinking Ship The Return of TillyBear →