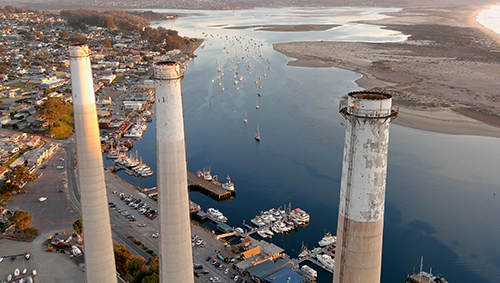 It’ll be one of the largest projects in Morro Bay history and the City has inked an agreement to have its costs reimbursed by the owners of the Morro Bay Power Plant.

The open-ended agreement started with an initial commitment of $175,000 “to cover City staff, legal, and consultant fees and costs associated with a proposed project by Vistra,” reads a staff report on the agreement. “The deposit is subject to replenishment from time to time if the fund gets depleted to less than $50,000.”

Community Development Director Scot Graham told Estero Bay News, “The reimbursement agreement covers costs since September 2021 and we are working on identifying the exact amount expended to date, but don’t have that information currently. The City Finance Department, Community Development Department and The City Attorney’s Office are coordinating on this effort, but it is likely to take a couple of weeks before we have a final total.”

He added that the reimbursement agreement allows for more money to be shelled out by Vistra when the fund drops below $50,000.

As for what the project’s cost — or what Vistra has been charged so far — Graham said he does have that amount. “As for costs dating back to December 2020 [when Vistra turned in its application],” he said, “those relate to just the application fees paid.”

These are all pretty standard planning fees but “do not reflect building permit cost as we don’t have those yet and won’t until after discretionary permits are issued…if any,” Graham said.

The environmental review for the project is well underway and a draft EIR is expected to be released in the coming weeks. Graham said they hired Rincon Consultants to do the EIR work. The City has a separate reimbursement agreement with Vistra to cover Rincon’s costs.

“The City,” Graham said, “has a separate reimbursement agreement with Vistra for Rincon Consultant contract equaling cost plus 25% (administration cost) for a total of $197,029.” That fund includes the environmental consultant deposit of $1,156 mentioned above.”

“When you have large, complicated projects,” Graham said, “it is not unusual for a jurisdiction to enter into a reimbursement agreement with an applicant to cover costs that were never anticipated under the City’s current fee structure.

“As you can see, the fees paid to date for just the permits total $12,669 and Staff time on the project has already exceeded this amount. The reimbursement agreement will allow the City to recoup staff time spent processing the application moving forward. If not for the reimbursement agreement, future staff time spent processing the application would be unreimbursed.”

Vistra wants to build a 600-megawatt BESS using lithium ion batteries, and housed in three 90,000 square foot buildings, sited on the former fuel tank farm at the power plant. The oil tanks were used to store fuel oil, diesel and other fuels that were burned at the plant over the years before emission restrictions were tightened up.

In the mid-1990s the plant switched to natural gas full time and the tanks were mothballed. Duke Energy, which purchased in 1998 four of Pacific Gas & Electric’s natural gas power plants, started the process of cleaning and demolishing the oil tanks, which was completed a few years later by Dynegy, the company that bought Duke’s four California plants and eventually merged with Vistra Energy.

The Morro Bay plant ceased operations in 2014 and now Vistra is hoping to cash in on the State’s push for renewable, carbon-free energy sources — mainly wind and solar — to reduce the carbon emissions that the State believes contribute to climate change. Indeed, switching to clean renewable energy generation is one of the main tenets of the State’s efforts to fight climate change.

But wind and solar are unreliable in that they only work when the sun is shining and the wind is blowing, which means their peak energy production doesn’t necessarily jibe with the peak demand, so the idea is to build such storage facilities to store excess energy when demand is low but capacity is high, and redistribute it when the demand goes up again.

Vistra has a 300 MW and a 100 MW BESS at its Moss Landing Power Plant. The 300 MW plant is currently the largest in the world and if the Morro Bay BESS is built, it will become the new world’s largest battery facility.

But there’s no guarantee it will ever be built as such projects have mountains of red tape to hurdle.

“Vistra needs to secure a number of permits, approvals, and entitlements for development of the Project,” reads a City report, “including a Coastal Development Permit [CDP] and compliance with the California Environmental Quality Act [CEQA].

“Various elements of the Project requiring Planning Commission and City Council consideration at public hearings for recommendation or approval are expected to be forthcoming sometime in 2022, including consideration of a CDP and a CEQA Environmental Impact Report.”

It should be noted that the reimbursement agreement doesn’t guarantee that the City will approve the permits for the project, which also has to undergo scrutiny by the Coastal Commission, as it is seeking a CDP and the Commission will undoubtedly assume control of the permit at some point, perhaps through an appeal process as there is already growing opposition to the BESS in town.

The agreement requires the City itemize all of its applicable costs on a monthly basis and give Vistra a heads-up when it thinks costs will rise above $100,000 in any given month.

The agreement makes no promises that Vistra’s project will be approved and gives it no undue special consideration or special priority status to the project. But while that is true under the agreement, the City stands to make a lot of money if the project is built.

Vistra’s initial cost estimate for the BESS is some $490 million, of which the annual property taxes alone would be some $4.9 million (1% of value), with the City receiving 10% of that or about $490,000 a year. The BESS is expected to have a 20-year lifespan.

Also, the City and Vistra are negotiating on the project, which is expected to have to come up with above-normal public benefits, as the BESS is not a coastal dependent use, which is required of industrial uses in the Coastal Zone.

The old power plant was a coastal dependent use because of its once-through cooling system. But exceptions can be made if a project shows great public benefit.

Also, Vistra has committed to demolishing the three, 450-foot tall smoke stacks and the 165-foot tall power plant main building by a date certain or pay $3 million to the City.