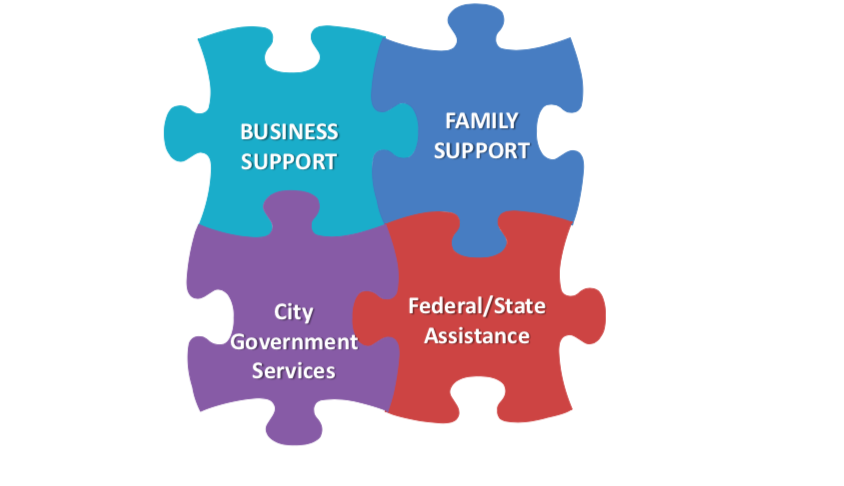 The tax shortfalls expected to hit Morro Bay from the Coronavirus economic shutdown will be more like an avalanche to the City’s budget this fiscal year and becoming potentially much worse next year.

The new figures on the economic effects from the shelter-at-home orders and shuttering of “non-essential” businesses, was already expected to hit hard, but the amounts being discussed are according to the City, “staggering.”

And it could even get worse than that. “Losses could increase beyond that depending on the re-opening of our society,” reads Collins’ report, “the tourism patterns that emerge from that, and the extent to which there is a second surge of COVID-19 in the fall and winter of 2020/21, which could result in shelter-at-home orders being reissued.”

The Harbor Fund is paid entirely by waterfront leaseholders and City slip holders and is used for maintenance of harbor facilities and the department’s personnel.

The City is using economic predictions and guidance from the Government Finance Officers Association’s 12-stage, “Financial Recovery Process: Recovery from Financial Disaster and Fiscal First Aid,” to draft its plan to weather the storm.

Calling it “Rock Solid Together” the City put together a plan for addressing the humongous losses of taxes, stemming mainly from the collapse of the tourism industry.

“Rock Solid Together,” City Manager Collins’ said, “is built on the foundation that the City wishes to retain local control over core, essential government services. With this foundation, Rock Solid Together is comprehensive and attempts to assist the local business community where feasible and administer fiscal first aide to City finances in light of the significant economic wound inflicted by the pandemic.”

Among the provisions are salary concessions made by nearly every City employee bargaining group. The Peace Officer’s Association, the Services Employee International Union (SEIU), and unrepresented management and confidential employees, all accepted a 5-percent salary cut, with discussions ongoing with the firefighters union whose contract comes up for renewal this summer.

City department heads and city manager also took pay cuts and the City Council and Planning Commission have forgone their monthly stipends. The City Attorney, which is a contracted law firm, agreed to drop their basic rate to $175 per hour.

“We as City Council are so grateful for the salary reductions taken by our employees,” said Mayor John Headding. “This is a hard time for our staff as they work on the front lines to fight COVID-19 and keep our community safe. It says a lot about their character as individuals and as a team, to step up and make this financial sacrifice to preserve City services.”

The Council has also suspended the contract with Mental Marketing, its tourism-marketing firm, stopping altogether tourism promotions until further notice. With the shelter-at-home orders from the Governor still in effect, tourism is actually being discouraged perhaps for the first time ever in this tourist-dependent town.

The city manager also sent out a letter to the registered owners of vacation rentals calling on them not to rent out their units until the shelter-at-home orders are lifted.

The efficacy of those letters has been mixed, as some residents have sounded off on the Next Door Morro Bay gossip website complaining about visitors continuing to come into town, bringing strangers to their neighborhoods.

Motel occupancy was at about 42% in February and was still strong until the May 19 shutdown ordered by the County Health Officer. Occupancy is now down around 1% at a time when it should be climbing in run up to summer.

City Council deferred rent payments from lease sites on the Embarcadero for March, April, May and June, said Collins.

The Council also deferred payments of TOT from hotels, vacation rentals and RV parks for February and March (until the end of August), and waived late fees for delinquent water and sewer bills.

It wants to explore a “microloan” program wherein it would loan money to local businesses to help them stay in business. The Council shifted $100,000 out of a $250,000 windfall it got from offshore energy hopeful, Castle Wind that had initially been pegged to make repairs on the South T-pier, in favor of a loan program for waterfront tenants.

Harbor Director Eric Endersby said, “Any money loaned would of course be paid back [likely at no or very low interest], with the Castle Wind $250K fund being ultimately made whole again for its originally-approved commercial fishing infrastructure use.”

Details on a micro-loan program will be brought back soon to the Council for possible action.

The Council extended its Utility Discount Program, set up to help with the hike last summer in water and sewer bills to pay for the City’s Water Reclamation Facility project.

The 10% discount program would now be available to anyone who lost a job due to the COVID-19 shutdown.

The Council plans to look at these and other potential actions as part of its next budget and should get the draft budget in late May or early June.

And though law requires a balanced budget, this next one should be a huge challenge given the anticipated revenue shortfalls.

The City was already facing a structural deficit, meaning that revenues were not keeping up with expenses and the City was dipping into its reserves to balance it. This was mainly due to anticipated hikes in the public employee retirement system. CalPERS reportedly lost billions when the stock market bottomed out last month, losses that have yet to be passed on to agencies in the system.

The prediction was that the City would run out of reserves by 2025 if nothing were done about it. But that’s been blown out of the water by the virus and the economic devastation of shutting down most of the town’s economy.

They proposed to bridge this with the Council and planning commission stipends ($8,900); $73,000 in salary concessions; $200,000 by not filling current vacancies; $6,000 savings from the city attorney’s contract; $600,000 in operational savings (non-essential services); and taking $1M out of the general fund reserves.

Lifting of the shelter-at-home orders out of Sacramento really couldn’t come fast enough for this local economy. But that might not even be enough.

“Morro Bay relies heavily on tourism to generate 24% of the City’s general fund revenues via TOT and additional revenues generated from tourism such as sales taxes and gas taxes,” Collins’ report stated. “With such heavy reliance on tourism to generate revenue to fund City services and the absence of key information guiding revenue assumptions, many key unanswerable questions remain, such as when will the City be able to welcome tourists and visitors back to our community and open restaurants and businesses?

“Also, when the shelter at home orders are lifted, will consumers feel comfortable traveling, staying in hotel rooms and potentially exposing themselves to the virus?”

Through thick and thin Morro Bay’s always been able to rely on having “heads in beds” to fuel its economy. But that could change.

“Will travel look different,” Collins asked, “for example a heavier tendency towards camping? When will recreational activities resume, special events and large gatherings? As we traverse this pandemic and these unprecedented times, staff feels it is crucial to have a multifaceted and adaptable plan to quickly acclimate to changing conditions.”